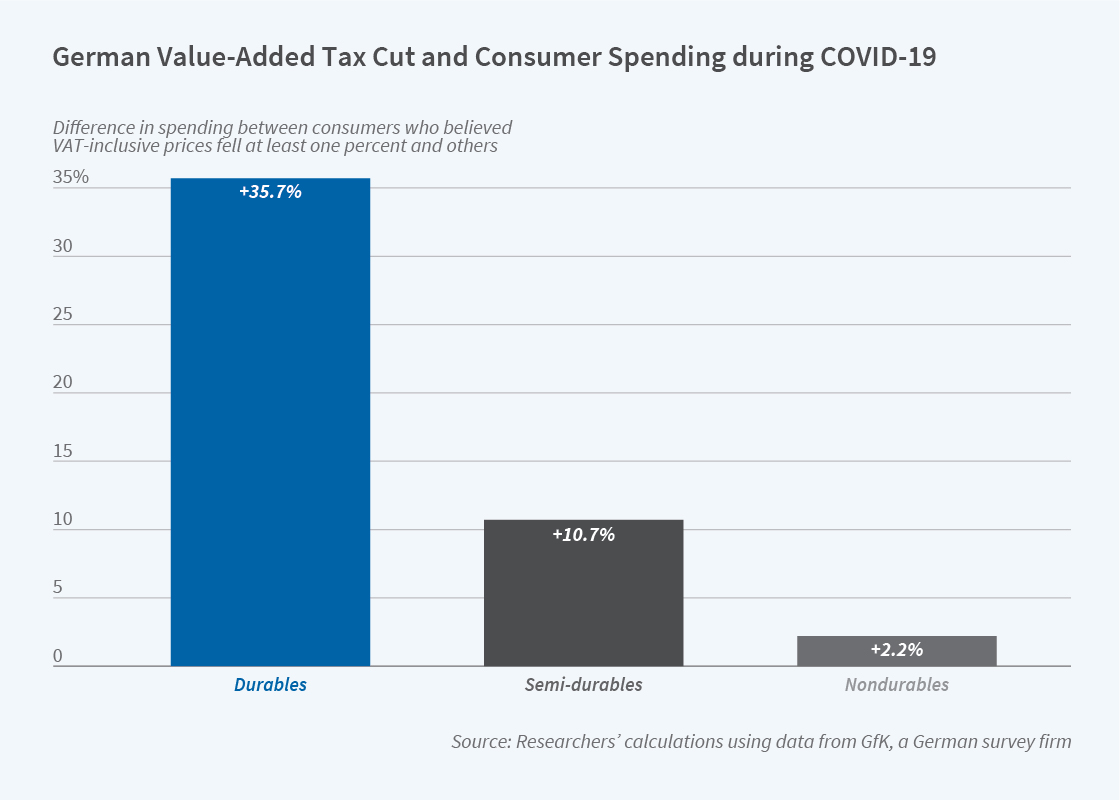 To increase aggregate demand during economic downturns, central banks have historically cut interest rates to increase consumer spending. But when nominal rates are at or near the zero lower bound, unconventional means by monetary or fiscal authorities may be needed to jump-start the economy. Cutting the value-added tax (VAT) or other sales taxes is one such option. This change in the tax on consumption can be implemented quickly and relatively easily, and unlike an increase in transfer payments, which can be saved, it is a direct inducement to greater spending.

In A Temporary VAT Cut as Unconventional Fiscal Policy (NBER Working Paper 29442), Ruediger Bachmann, Benjamin Born, Olga Goldfayn-Frank, Georgi Kocharkov, Ralph Luetticke, and Michael Weber examine the effects of a temporary and unexpected VAT cut in Germany in the second half of 2020. They find that spending on durable goods rose substantially. Spending on semidurable and nondurable consumption goods also rose, but by substantially less. This policy had a progressive effect, as young and middle-aged households with low net worth took the most advantage.

Germany’s VAT is a federal tax. A standard rate of 19 percent applies to roughly half of what Germans buy, while a reduced rate of 7 percent is charged on about a fifth of consumption. In June 2020, in the midst of a pandemic and facing a recession, Germany cut the standard VAT rate to 16 percent and the reduced VAT rate to 5 percent. The cuts were effective July 1 through December 31.

The researchers utilized two surveys to determine whether households changed their behavior in response to the tax rate cuts, and if so, which ones did. The first, in July, asked consumers what they knew about the VAT cut and about their plans for spending on durable goods. While nearly all of those polled knew about the tax cut, only about 60 percent knew rates would go back up in January. These well-informed households were the most likely to alter the timing of purchases to take advantage of the tax savings. Following the VAT rate cut, the share of households reporting that they planned to increase their durable goods purchases in the second half of 2020, relative to a year earlier, rose by more than 10 percentage points.

The second survey, conducted in January 2021 after the VAT cut was over, asked about households’ durable consumption spending when tax rates were low. The researchers point out that consumers who did not perceive that the tax cuts lowered tax-inclusive prices had no incentive to adjust the timing of their purchases. However, two-thirds of those surveyed reported that they believed that the VAT relief reduced consumer prices by at least 1 percent. These households spent 36 percent more on durables than households that did not believe the lower tax rates were reflected in price reductions. A similar comparison using scanner data found that for semidurables and nondurables, the spending increases were smaller, 11 and 2 percent respectively, for those who believed that the tax cuts were passed through.

The pandemic-induced cut in VAT rates pushed consumption toward durables. The researchers estimate that durables spending rose by 21 billion euros, and that overall spending rose by 34 billion euros. The rate of spending reached its peak right before the tax cut ended. Despite the increased spending, the German government still lost about 7 billion euros in revenue.

Part of the VAT cut’s success was its simplicity. The extra spending on durables was not driven especially by households that reported being financially literate or having long planning horizons for saving and consuming. Instead, bargain-hunters — consumers who said they shopped around or were particularly sensitive to price, and younger households with relatively weak financial situations — accounted for most of the boost.