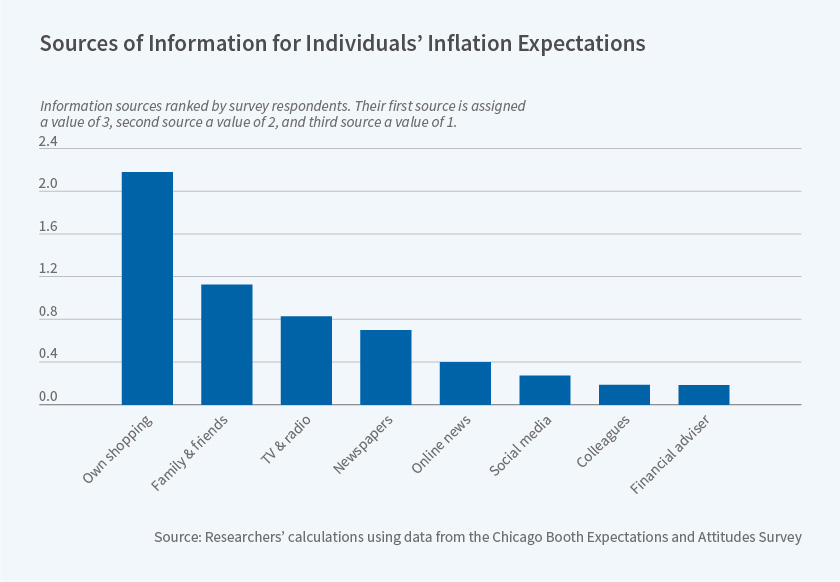 Consumers who experience extreme changes in grocery prices are more likely to base inflation expectations on those changes than those who see little or moderate grocery-price movement.

Standard inflation measures such as the core Consumer Price Index (CPI), which do not focus on price changes in the food and energy sectors, may be omitting some of the price information that is most important for households as they form inflation expectations, according to Exposure to Daily Price Changes and Inflation Expectations (NBER Working Paper 26237). The researchers' of this study, Francesco D'Acunto, Ulrike Malmendier, Juan Ospina, and Michael Weber, find that consumers base their outlook about future prices on trends they see while grocery shopping..

The study merges data collected by Nielsen for more than 90,000 households with customized surveys designed by the researchers for the same households. The merged data include details about individual shopping trips, such as prices and quantities purchased, and demographic information, such as age, income, marital status, household size, and education level. In 2015-16, survey participants on average predicted year-ahead inflation of 4.7 percent and reported that they thought inflation over the previous year had been 4.4 percent. Both values are about twice the rate measured over the same time period by the core CPI, and this disparity is common of virtually all household-level inflation expectations. The researchers aim to help explain this disparity. They find that consumer beliefs about inflation are far more likely to be shaped by the prices on the shelf than by government reports..

The researchers used the Nielsen panel's detailed consumer spending data to construct a household-level CPI using information about the prices and quantities of non-durable goods in each household's consumption basket. They found that expectations of future inflation varied substantially with the household's exposure to different grocery-price changes. The price changes that correlated most with inflation expectations were those goods households purchased frequently, such as milk and bread, rather than the goods on which households spent a larger part of their budget, which is the implicit underlying assumption in most aggregate measures of inflation such as the core CPI..

The researchers stratified the survey participants into three equal-sized subsamples, based on the price changes they observed. The bottom third saw price drops ranging from -11.7 percent to -0.9 percent. The middle third saw only moderate changes, from a 0.9 percent decline to an increase of 2.8 percent. The top third reported price increases ranging from 2.8 percent to 23.1 percent. The consumers who experienced the most extreme price changes — either negative or positive — were far more likely to extrapolate from their trips to the grocery store when forming inflation expectations than those who saw little to moderate change.

The correlation between the individual's observed inflation rate based on non-durable consumption purchases and inflation expectations tended to be higher among consumers who shopped less often, who observed larger price changes, on average, from one shopping trip to the next. For example, the correlation was 40 percent higher for respondents who were not their household's main grocery shopper.

Based on additional surveys, the researchers found that those with higher inflation expectations were significantly more likely to anticipate upswings in wages and house prices. Consequently, they might be more likely to bargain for higher pay and to invest in real estate and durable goods rather than in assets liable to erode in value due to inflation.