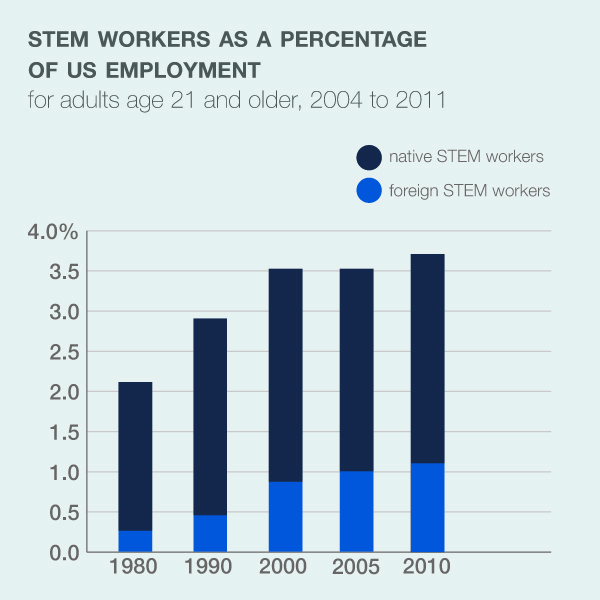 The effect of immigration on the wages and employment of native workers is a topic of perennial debate. According to Foreign STEM Workers and Native Wages and Employment in U.S. Cities (NBER Working Paper No. 20093), extending visas to more STEM workers increases the wages of native workers and does not affect the employment of other groups, although it does raise housing costs for college-educated workers.

The study concentrates on foreign workers in order to determine whether the increase in STEM workers causes wages to rise or whether other factors are at work. The authors compare the share of foreign STEM workers in each of the 219 metropolitan areas in 1980 with changes starting in 1990, when the government initiated the H-1B visa program, the main channel of entry of foreign STEM workers. By doing so, the authors are able to isolate a supply-driven change in STEM workers that is likely exogenous to other factors that might affect wages, employment, and productivity across cities.

These foreign workers - unlike their innovations - did not spread evenly across the country. y were concentrated in certain cities in 1980, before the H-1B program, and the H-1B visa-holders tended to flow to those cities as well. This disparity among cities allows the authors to compare the local rise in wages, which boosts the wages even of native non-college graduates, although the effect is about half of what it is for native college graduates.

The authors also find that STEM workers have an effect on total factor productivity and skill-biased productivity: "...inflows of foreign STEM workers may explain between 30 and 50% of the aggregate productivity growth and 4 to 8% of the skill bias growth that took place in the U.S. between 1990 and 2010."