Immigration and Nationalism: A Matter of Degrees? 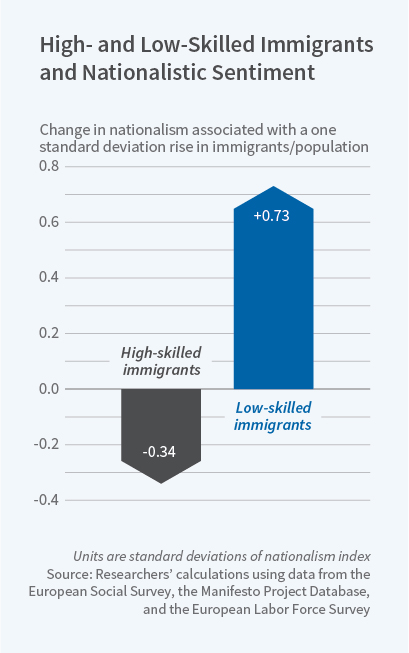 Recent elections in Europe and the United States demonstrate the growing strength of populist and nationalistic causes and politicians. One explanation of this development is deep voter anger at governmental policies with regard to immigrants, whom nationalists tend to view as poor, unskilled, and burdens on the national economy and budget.

In Skill of Immigrants and Vote of the Natives: Immigration and Nationalism in European Elections 2007-16 (NBER Working Paper No. 25077), Simone Moriconi, Giovanni Peri, and Riccardo Turati explore the relationship between immigration and European elections. They develop an index of "nationalistic" attitudes of political parties to measure the shift in preferences among voters when confronted with influxes of skilled and unskilled immigrants. They find that larger inflows of highly educated immigrants dampen nationalistic sentiments, while larger inflows of less-educated immigrants heighten them. Their results imply that a more balanced inflow of high-skilled and low-skilled immigrants could attenuate voters' nationalistic attitudes.

The economic, political, and cultural impact of immigration on European countries has been widely studied, with particular attention to how the education levels of native voters influence their voting preferences. The new study tracks voter attitudes and behavior for all political parties and elections in 12 European countries for a decade. It relies on demographic and political data from the European Social Survey and a number of other sources. In addition, the researchers collected and classified the political manifestos of 126 parties for 28 elections, focusing in particular on how frequently these materials mentioned nationalistic subjects, the European Union, and other indicators of where parties stood on the political spectrum. In effect, they created an "average nationalism score" that they could use to measure voting pattern deviations either toward or away from nationalism in reaction to immigrant inflows.

The analysis of voter attitudes with regard to nationalism finds that highly educated native voters are less nationalistic in their attitudes towards immigrants than less-educated natives. The data also show strong nationalistic sentiments in regional pockets in the United Kingdom, Ireland, France, Germany, Demark, Sweden, Norway and, especially, Italy.

Skill of the Immigrants and Vote of the Natives: Immigration and Nationalism in European Elections 2007-2016