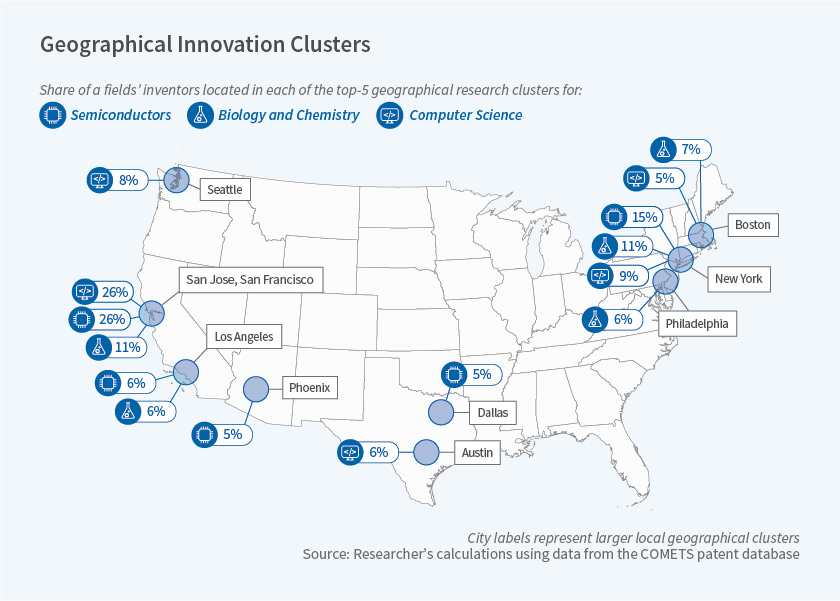 San Jose-San Francisco-Oakland leads in the number of semiconductor and computer science inventors; New York has the largest cluster in biology, chemistry, and medicine.

More than half of all inventors in the United States in three high-tech fields — computer science and information technology; semiconductors; and biology and chemistry— work in clusters of 10 cities, and this concentration of talent into geographical high-tech centers has increased over time, Enrico Moretti reports in The Effect of High-Tech Clusters on the Productivity of Top Inventors (NBER Working Paper 26270). He asks why inventors tend to locate near one another in tech centers such as San Francisco and Seattle despite the high costs of living in these locations.

The study uses data from 1971 to 2007 on the patents of 823,359 inventors located in 179 cities to assess where innovation occurs. The semiconductor field emerges as one of the most highly concentrated, with 77 percent of all inventors located in 10 clusters. San Jose-San Francisco leads this field with 25.5 percent of all semiconductor inventors, followed by the New York region with 14.9 percent, and Los Angeles with 6.1 percent. Ten tech clusters also account for almost 70 percent of all inventors in computer science, again led by San Jose-San Francisco (26.1 percent) and New York (9.1 percent). In this field, Seattle (8.3 percent) is third. In biology and chemistry, the top 10 clusters account for 59 percent of the total share of innovators, led by New York (11.3 percent), San Jose-San Francisco (11.1 percent), and Boston (6.9 percent). The geographic concentration of inventors in all research fields was significantly higher in 2007 than in 1971, despite the proliferation of affordable communications that allow for remote or virtual work opportunities.

The study finds that when inventors move from smaller tech clusters to larger ones, their productivity rises significantly, as measured by their number of patents filed and the resulting citations. There is no evidence that inventors who moved were on a rising productivity trajectory before the move. For example, a computer scientist who moved from Gainesville, Florida, which is a median cluster, to a larger, 75th percentile cluster such as Richmond, Virginia, would see on average a 12 percent increase in productivity. A similar move by inventors in biology and chemistry would be followed by an average 8.4 percent productivity boost.

Moretti presents a counterfactual calculation of the number of patents that would have been produced annually in each field if some inventors were relocated so that the clusters in every city were of the same size within each research field. This redistribution would increase the productivity of inventors in previously smaller clusters, and reduce it among inventors in previously larger clusters. This calculation suggests that the total number of computer science patents would have been 13.2 percent lower in 2007 had the inventors been distributed uniformly across the nation. Overall, such a redistribution would have reduced patent output by 11 percent across all fields.