The Impact of School Quality on the Transmission of Inequality 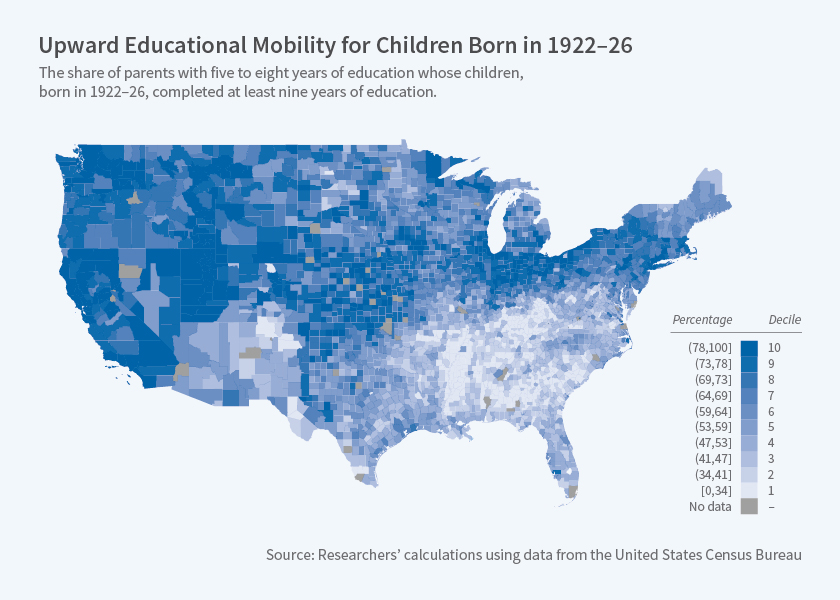 Evidence from the 1940s shows that schools can be vehicles for discrimination or can help improve equality of opportunity across generations.

As access to public education spread across the United States in the early 20th century, some children benefited more than others. Children's schooling achievement was positively related to parental education, but the link between parental and children's education varied substantially by place of birth.

A child's years in school were affected by multiple factors, including, importantly, the local school environment. In The Intergenerational Transmission of Human Capital: Evidence from the Golden Age of Upward Mobility (NBER Working Paper No. 25000), David Card, Ciprian Domnisoru, and Lowell Taylor find that children's schooling choices were highly responsive to the quality of local schools. Children in areas with higher-quality schools on average spent more time in school, and this increased their likelihood of intergenerational upward mobility. Black children in the Deep South and white children in some rural areas were particularly disadvantaged by limited access to high-quality schools.

Using data from the 1940 census, the researchers document a positive correlation between parents' levels of educational attainment and the schooling outcomes of their children. They divide white families into four groups based on parents' years of education: 0–4, 5–8, 9–12, and over 12 years. Then, using state-level teacher-to-pupil ratios and teacher salaries as proxies for school quality, they examine the impact of school quality on children from these different family backgrounds. Attending a higher-quality school had the largest effect for children with the least-educated parents, and the smallest for those with the most-educated parents. They conclude that "higher average school quality in a state contributed to a narrowing of human capital disparities between generations."

How much narrower, exactly? Their estimates suggest that when parents had an average level of schooling — five to eight grades — a $500 increase in teacher salaries was associated with a three-fourths of a year increase in the child's completed education. Taken at face value, these estimates indicate that if a family lived in a high school-quality state like California, their children would obtain, on average, an extra two years of education compared to living in a low school-quality state like Alabama. Assuming a 7 percent return to each additional year of schooling, this resulted in around 15 percent higher earnings per year of work.

In the early 20th century, black families typically faced circumstances that differed greatly from those of their white counterparts. Most lived in the South, where children attended segregated schools. Thus the researchers conducted analyses separately for black and white families. In the study period, few black parents had more than an elementary-school education. They were also unlikely to be able to lobby for greater school resources. In the Deep South, with its institutionalized segregation and lower salaries for black teachers, black children had lower outcomes than in other Southern states. In states with higher-quality schools, black children attained schooling at similar rates as their white peers. In California, upward mobility rates of white and black children were nearly equal.

The researchers illustrate the importance of teacher inputs in determining school quality and student outcomes by studying 270 counties along Southern state borders with similar economic conditions, but different minimum wage levels for teachers. The difference in salaries between adjoining states was often large, particularly for black teachers. In the Deep South, black teachers often were paid much less than their white counterparts. The minimum annual salary in 1940 in Georgia, for example, was $280 for white teachers and $175 for black teachers, but in contrast it was $320 for both white and black teachers in Tennessee, the bordering state to the north. The researchers find that, on average, states with the lower minimum salary for black teachers, like Georgia, had lower average upward mobility among black students.

The research highlights the long-term effects of unequal access to quality public schooling but, they conclude, it also demonstrates that high-quality education is "a viable means of improving equality of opportunity across generations."

The Intergenerational Transmission of Human Capital: Evidence from the Golden Age of Upward Mobility