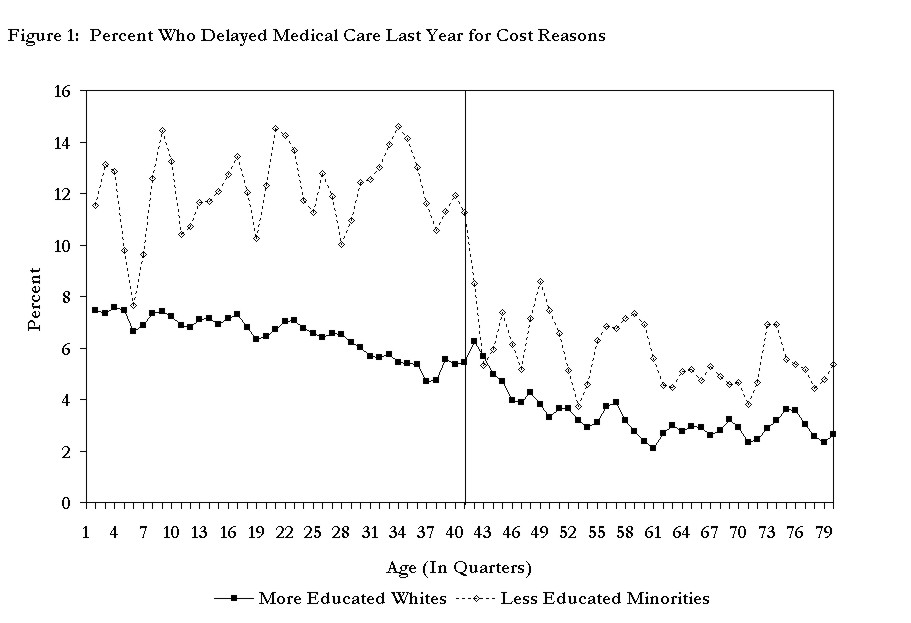 Over 43 million Americans, or some 17% of the non-elderly population, lacked health insurance in 2002. Previous research has established that the uninsured have worse health outcomes, but the effect of insurance on health outcomes is more difficult to ascertain. For example, if insured and uninsured persons differ systematically in various behaviors that affect health, such as diet, smoking, and exercise, then observed differences in health outcomes might not be due solely to differences in insurance coverage.

As the authors show, insurance coverage jumps at age 65, from 90% to 98% for the population as a whole. The authors assume that absent this jump, outcome measures such as the number of hospitalizations should evolve smoothly with age, so that any observed discontinuous jump at age 65 can be attributed to the effect of increased insurance coverage. As the rise in coverage is particularly large for less educated minorities - the authors find that the coverage gap between this group and educated whites falls from 20 percent before age 65 to 5 percent after - the authors are especially interested in examining whether inter-group disparities in utilization and outcomes narrow at age 65.

The authors use multiple data sources for their analysis, including the National Health Interview Survey, the Behavioral Risk Factor Surveillance System, the Multiple Cause of Death file, and hospital discharge records from California and Florida. The authors first look for evidence of an age-65 discontinuity in access to medical care. As Figure 1 illustrates, the fraction of individuals reporting that they delayed medical care in the past year for cost reasons falls dramatically at age 65 for less educated minorities, while there is no significant break in the long-term trend for educated whites.

Similarly, the authors find that the probability of having seen a doctor in the past year rises significantly at age 65 for less educated minorities, while it is flat for educated whites. The finding that the group with the largest gain in insurance coverage at age 65 also has the largest increase in self-reported access to care and doctors' visits suggests that insurance coverage does affect health care utilization.

Next, the authors look at the effect of Medicare on hospital stays. They find that the number of hospital admissions jumps by 5 to 10 percent at age 65. Interestingly, admissions remain at the new higher level after age 65, suggesting that the increase is not primarily due to individuals delaying hospital care until age 65. In stark contrast to the earlier findings, the increase in hospital admissions is greater for whites than for minorities. The authors also show that the increase is greater for elective admissions such as joint replacement surgery than for emergency admissions. Taken as a whole, the results suggest that changes in admissions are not due to increases in insurance coverage at age 65 per se, but rather to some other aspect of Medicare. For example, relative to many private insurance plans, Medicare may more readily cover a broader array of procedures, but require larger copayments. High socio-economic status individuals may be more likely to increase hospital admissions after age 65 because they can more easily afford these copayments or have secondary insurance to cover them.

Finally, the authors examine changes in health behaviors and outcomes at age 65. They find no evidence that the probability of smoking, exercising, or being overweight changes significantly at age 65. The evidence on health outcomes is mixed - self-reported health status rises modestly at age 65 for less educated minorities, eliminating 15% of the gap between their health status and that of the population as a whole, but there is no evidence that Medicare eligibility has an immediate impact on an individual's probability of dying. The authors conclude that their findings point to "a significant but relatively modest impact of health insurance on health."

The Impact of Nearly Universal Insurance Coverage on Health Care Utilization and Health: Evidence from Medicare