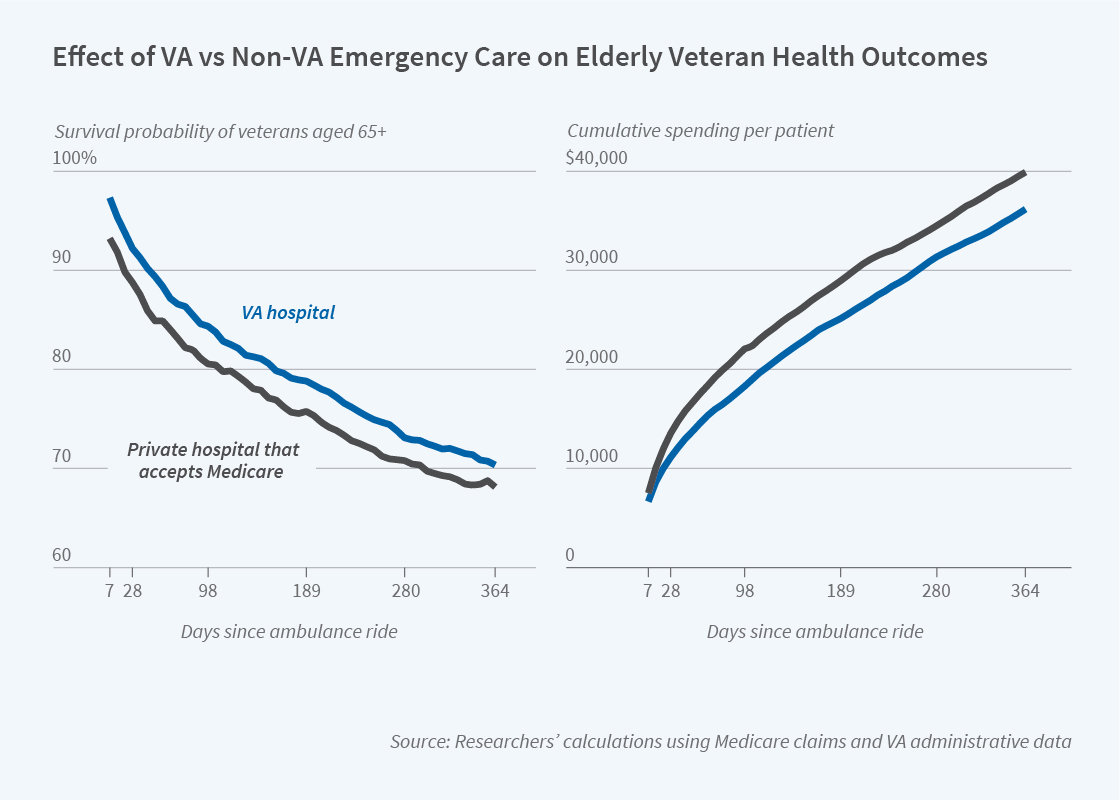 Millions of elderly veterans are “dually eligible” to receive hospital care in two distinct settings: at public facilities funded by the US Department of Veterans Affairs (VA) or at private hospitals that accept Medicare reimbursement. The choice of setting is consequential for both the costs of their care and health outcomes, as demonstrated in Is There a VA Advantage? Evidence from Dually Eligible Veterans (NBER Working Paper 29765) by David C. Chan, Jr., David Card, and Lowell Taylor.

Veterans who choose to receive care in VA hospitals are, on average, sicker than those who choose private hospitals. As a result of this health differential, a simple comparison of outcomes for veterans treated in the two settings would be misleading. To avoid this concern, the researchers rely on differences in hospital choice that arise from the randomness of ambulance dispatches following a 911 emergency call. Using administrative data from Medicare and the VA, the researchers compare veterans who reside in the same zip code but are assigned by the emergency dispatcher to different ambulance companies with differing tendencies to transport patients to VA and private hospitals.

The results of this comparison are striking. Veterans who were induced by the ambulance company to be treated at a VA hospital are 4.5 percentage points (46 percent) less likely to die within 28 days of the ambulance ride. While survival improves more for medically vulnerable patients, improvements are apparent across all veterans.

The first panel of the figure shows that survival rates across the two hospital types diverge during the first week of care and the gap does not narrow during the year following the emergency. This time pattern suggests that differences in care within the first week explain the survival gains associated with VA hospital care.

Interestingly, the substantial health benefits at VA hospitals are not associated with more expensive care. On the contrary, treatment at a VA hospital substantially lowers the overall cost of care. As shown in the second panel, the total cost of care is $2,598 (21 percent) lower at VA hospitals during the 28 days following the ambulance ride and this cumulative spending differential endures over time. The researchers explain that the lower costs at VA hospitals reflect a different overall pattern of care including fewer hospital days, more outpatient care, and more telephone calls. In fact, telephone calls are reported only for VA patients.

What explains these differences in care and outcomes? The researchers highlight several institutional differences that could contribute to them. First, the two types of hospitals face fundamentally different financial incentives. Private hospitals rely on fee-for-service reimbursement and, as a result, may be motivated to provide care that is highly reimbursed and avoid care that is not. VA hospitals, in contrast, receive funding based on the needs of the enrolled veterans, not the specific pattern of care that is provided. In addition, care provided by the VA system is integrated across settings, with a long-standing electronic health record system that facilitates coordination of care. While the study cannot definitively determine the mechanisms underlying the VA advantage, suggestive evidence indicates that each of these channels may play a role.

Is There a VA Advantage? Evidence from Dually Eligible Veterans