Who Pays and Who Benefits from Public Infrastructure Projects 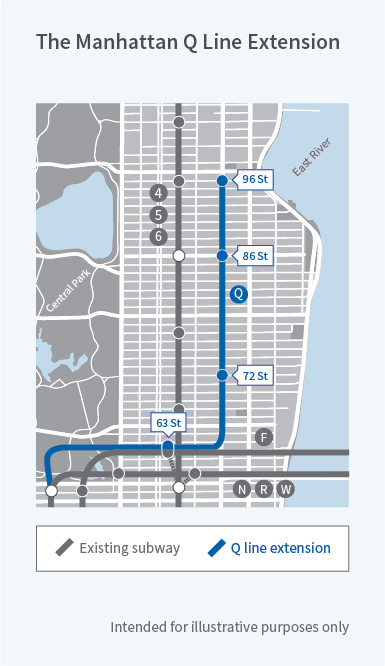 The Second Avenue subway extension cost $4.5 billion and generated more than $7 billion in property appreciation, but public revenue rose by only a fraction of the benefits.

Transit infrastructure is a critical asset in most cities, but it is expensive to build. To finance expenditures of this magnitude, local governments must either be able to identify revenue streams that will cover the cost, or argue that there are going to be substantial non-revenue benefits from the project.

In Taking the Q Train: Value Capture of Public Infrastructure Projects (NBER Working Paper 26789), Arpit Gupta, Stijn Van Nieuwerburgh, and Constantine Kontokosta show that in the case of New York City’s Second Avenue subway extension, the increase in city revenues recouped only a fraction of the project’s costs, even though the benefits to firms and households were well in excess of these costs.

The Second Avenue subway extension, served by the Q train, was the most substantial investment in public subway infrastructure in the United States in the past several decades. It was completed in 2017. The public return on the project could be defined narrowly as the project’s user fees net of operational expenditures, and broadly to include the incremental property, sales, and labor income tax revenues. Even the broader revenue stream captures only some of the benefits of the project, since it ignores the value of reduced air and noise pollution, less traffic, and the jobs created by the project. Most of these benefits are challenging to measure or to include in a cost-benefit calculation.

The researchers find that the project reduced commuting time, as expected. They estimate the commuting-time benefits of the subway extension using mobile phone location data. They document substantial reductions. Commutes shortened by three minutes for all nearby residents, and by 14 minutes for residents who took the subway.

To gauge the total private benefits of the project, the researchers note that real estate values in the vicinity of public transportation hubs capitalize the present value of all future benefits that accrue to households and businesses from transportation gains. They find that residential and commercial real estate asset values in the area defined as the Second Avenue Corridor (properties between 1st and 3rd Avenues) rose by approximately 10 percent, or about $7 billion, after the subway was extended, relative to other properties on the Upper East Side.

While the rise in real estate values exceeded the $4.5 billion cost of the project, suggesting that this project would pass a standard cost-benefit test, the city collected relatively little of this benefit. It was projected to receive only about $2.1 billion in future property taxes as a result of the extension-induced increase in property values; the other $2.4 billion in costs would be defrayed by taxpayers who did not benefit from the project. Thus more than two-thirds of the value created by this project accrued to private property owners. The researchers note that cities would find it easier to cover the cost of infrastructure projects if they were able to levy targeted property taxes on the properties whose owners benefited most from them.