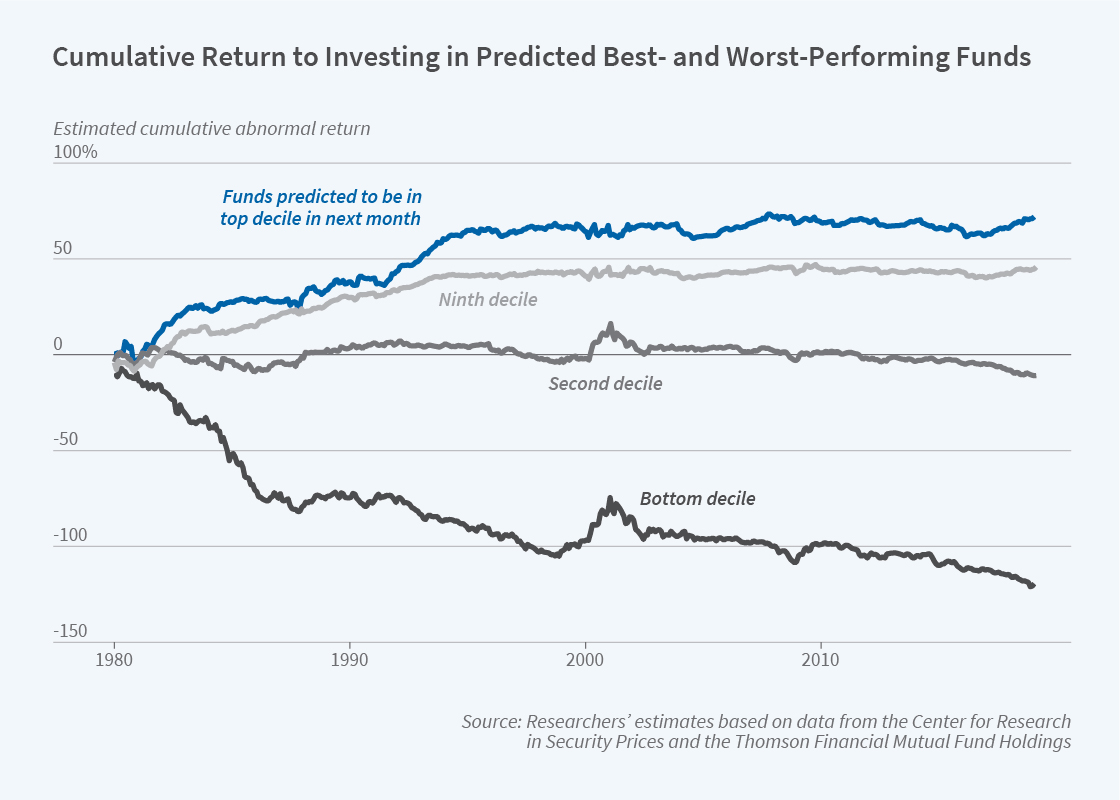 In Machine-Learning the Skill of Mutual Fund Managers (NBER Working Paper 29723) Ron Kaniel, Zihan Lin, Markus Pelger, and Stijn Van Nieuwerburgh use a neural network to predict mutual fund performance. They estimate relationships among a large set of fund attributes to identify the US mutual funds with the best relative performance. They apply their model to predict the best-performing decile of funds each month and to compute portfolio weights for different funds that will produce the maximum return within the top decile.

A model that includes interaction effects between investor sentiment, fund flows, and fund momentum has substantial power to predict the best- and worst-performing funds.

The average mutual fund in the sample of 3,275 funds was almost 14 years old, had $1.15 billion in assets, and charged a monthly expense ratio of about 0.1 percent. Abnormal returns were those earned in excess of what an investor would expect given a fund’s level of risk. Such returns were estimated by subtracting the monthly Treasury-bill yield from a fund’s monthly performance before fees, minus the estimated compensation for systematic risk factor exposure. Ten to 20 percent of funds in the sample generated positive abnormal returns after fees were subtracted, with most gains accruing from avoiding the worst-performing funds. The average abnormal return was −0.03 percent per month.

The researchers conclude that little can be learned about a fund’s performance from the characteristics of the stocks it holds. Their alternative approach began with 59 fund characteristics and studied how they were associated with subsequent fund returns. The machine learning model they apply to these data uncovered substantial interaction effects between investor sentiment and both fund flow and fund momentum. A fund’s momentum is its mean abnormal return in the preceding 12 months, excluding the most recent month. Flow is the change in total net assets in a month. Abnormal returns were nearly identical when the fund characteristics in the model were pared down to these three attributes.

Periods of above-average investor sentiment drove the strong association between fund momentum, flow, and the next month’s abnormal performance. When combined with fund characteristics, the state of the macroeconomy, proxied by the Chicago Fed National Activity Index (CFNAI), predicted the best and worst performers as well as investor sentiment. Though models that use sentiment and the CFNAI put 78 percent of the same funds in the bottom decile and 74 percent of the same funds in the top decile, the model with sentiment did a better job of predicting funds’ actual abnormal returns. Investor sentiment was also better at predicting the relative returns within the top and bottom deciles. Prediction-weighted portfolios created from the top decile of funds earned a cumulative abnormal return of 72 percent. Investing in equally weighted portfolios returned just 48 percent.

The results are consistent with investors successfully detecting skilled managers and reallocating their investments toward them. They are also consistent with funds and fund families successfully using marketing to attract investors. Fund inflows create buying pressure for the stocks held, raising their prices and lifting fund returns. That demand pressure increases prices further, generating momentum in fund returns. The fact that flows and fund momentum have a much stronger association with fund performance in high-sentiment periods lends further credence to this marketing-driven channel. However, changes in inflows were gradual and small enough, the researchers found, to take several months before the fund ran into zero marginal abnormal returns. Skill, therefore, leaves a trail in the form of fund return momentum, and investors can exploit this to earn higher returns.