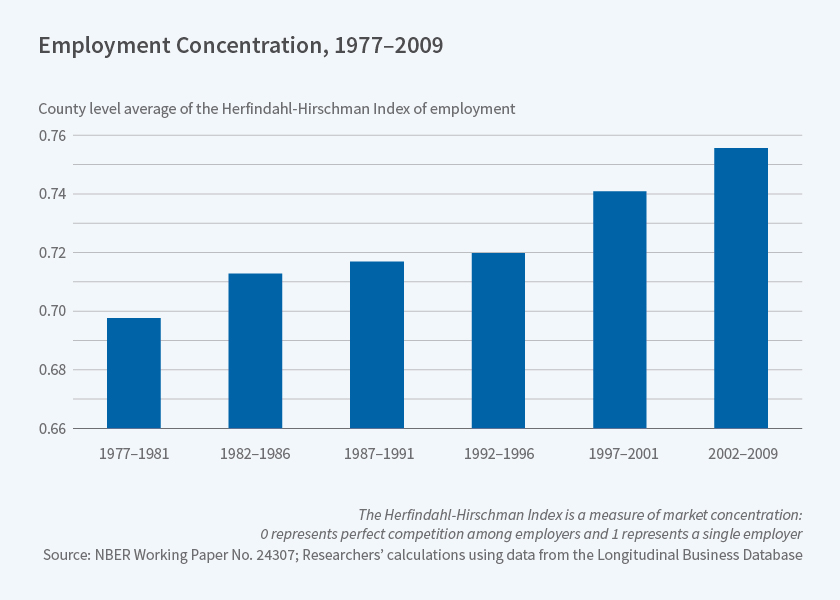 Two studies suggest that an increase in employers' monopsony power is associated with lower wages.

Stagnant wages and a declining share of labor income in GDP in recent decades have spawned a number of explanations. These include outsourcing, foreign competition, automation, and the decline of unions.

Two new studies focus on another factor that may have affected the relative bargaining position of workers and firms: employer domination of local job markets. One shows that wage growth slowed as industrial consolidation increased over the past 40 years; the other shows that in many job markets across the country there is little competition for workers in specific job categories.

In Strong Employers and Weak Employees: How Does Employer Concentration Affect Wages? (NBER Working Paper No. 24307), Efraim Benmelech, Nittai Bergman, and Hyunseob Kim analyzed county-level census data for industrial firms for the period 1977 to 2009 to study the impact of employer concentration on wages in local labor markets. By focusing on manufacturing, they were able to control directly for worker productivity.

The researchers found that, although there was substantial cross-sectional and time series variation in concentration, average local-level employer concentration increased between 1977-81 and 2002-9, based on the Standard Industrial Classification four-digit code for industry groups. Their measure of concentration is the Herfindahl-Hirschman Index (HHI), which is defined as the sum of the squares of the employment shares for all of the firms in a given industry. The employment-weighted mean value of this index rose from 0.698 to 0.756 during the study period, an increase of 5.8 percent. Forty percent of the plant-year observations were associated with manufacturing facilities in counties dominated by just a few firms.

The researchers found a negative relationship between employer concentration and wages; it was twice as strong in the second half of their data sample as in the first half; a one standard deviation increase in the HHI was associated with a wage reduction of between 1 and 2 percent. They estimate that a firm operating in a labor market in which it was the only employer would pay wages 3.1 percent lower than those of a firm that operated in a less concentrated market. Most of the decline in wages appeared to occur as labor markets approached the pure monopsony case, namely the situation in which only one firm is hiring workers.

In addition to finding lower wages in monopsony markets, the researchers also found that, over time, firms that dominate their labor markets were less likely to share productivity gains with employees. A one standard deviation decline in the HHI mapped to an increase in the elasticity of wages with respect to productivity of about 25 percent, from 0.38 to 0.47.

Over the course of the study period, U.S. imports from China increased. The researchers found that import competition from China, which was associated with the closure or relocation of plants in a number of industries, accelerated the trend toward greater employer concentration in some local labor markets. This finding suggests that import competition not only reduced the demand for workers who previously produced the now-imported products, but that it may also have depressed wages for workers in other industries in affected labor markets as a result of increased labor market concentration.

The only employees who did not experience wage stagnation in markets with high plant concentration were those who belonged to unions. About one quarter of the plants studied were unionized; the fraction was lower in the later than in the earlier years. Because this study focuses on workers employed by industrial firms, the fraction of workers who are union members is higher than for the U.S. labor market more broadly.

To assess the robustness of their results, the researchers compared plants in the same industry owned by the same company but operating in different locations; they found that "those located in a more concentrated local labor market pay significantly lower wages." 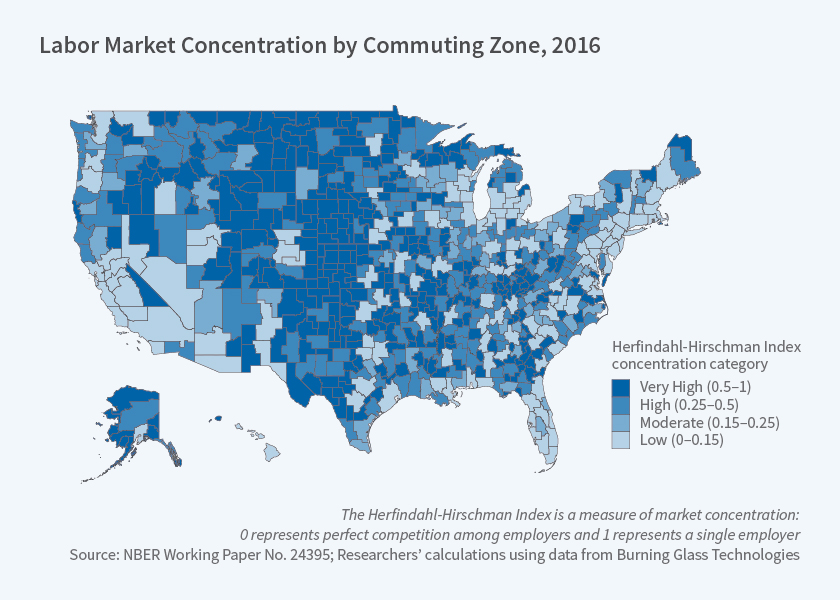 In Concentration in U.S. Labor Markets: Evidence from Online Vacancy Data (NBER Working Paper No. 24395), José A. Azar, Ioana Marinescu, Marshall I. Steinbaum, and Bledi Taska found that in most locations employers have substantial monopsony power.

The researchers studied job vacancies in the 709 federally delineated commuting zones, which depict the bounds of local economies. Drawing on a database compiled by Burning Glass Technologies from 40,000 employment websites, they calculated the level of labor market concentration by commuting zone, occupation, and quarter for the year 2016. They selected the top 200 occupations as classified by the Bureau of Labor Statistics' six-digit code, capturing 90 percent of the job postings in the database.

The average market had the equivalent of 2.5 recruiting employers. Under the standards that federal antitrust officials use when determining whether product markets exhibit excessive levels of concentration, 54 percent of the markets were highly concentrated, meaning they had the equivalent of fewer than four firms recruiting employees. Eleven percent of markets were moderately concentrated, and only 35 percent had low concentration.

The actual picture for job seekers, however, was brighter than these figures would indicate because commuting zones vary widely in employment levels. Commuting zones encompassing large cities had lower levels of labor market concentration than those around small cities or in rural areas.

Accounting for the unequal distribution of employment, the researchers found that 23 percent of the national workforce is in highly or moderately concentrated labor markets. They argue that traditional market concentration thresholds underestimate workers' loss of bargaining power over time. They point out that those thresholds are geared to gauging the impact of mergers on the consumer marketplace, and that while consumers can buy products without the producers' explicit agreement, workers must find employers who agree to hire them.