Where Are ISIS's Foreign Fighters Coming From? 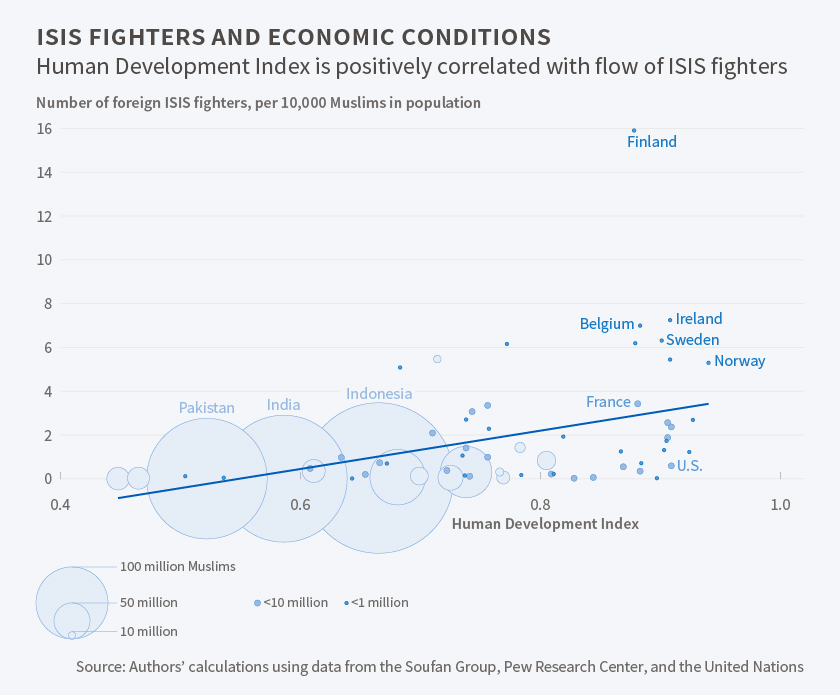 Many come to the Middle East from countries with high levels of economic development, low income inequality, and highly developed political institutions.

As of December 2015, approximately 30,000 fighters from at least 85 countries had joined the Islamic State of Iraq and Syria (ISIS). Although the great majority of ISIS recruits come from the Middle East and the Arab world, there are also many from Western nations, including most member-states of the European Union, as well as the United States, Canada, Australia, and New Zealand. Thousands of fighters from Russia and hundreds from Indonesia and Tajikistan also have joined. ISIS's recruitment of foreign fighters is a global phenomenon that provides the organization with the human capital needed to operate outside the Middle East.

In What Explains the Flow of Foreign Fighters to ISIS? (NBER Working Paper 22190), Efraim Benmelech and Esteban F. Klor explore how country characteristics are associated with ISIS recruit flows. They discover more about what does not motivate the foreign fighters than what does.

They find that poor economic conditions do not drive participation in ISIS. Rather, the number of ISIS fighters from a given country is positively correlated with that country's per capita gross domestic product and its place on the Human Development Index. Many foreign fighters originate from countries with high levels of economic development, low income inequality, and highly developed political institutions.

Other factors that explain the number of ISIS foreign fighters are the size of a country's Muslim population and its homogeneity. A country's political characteristics are not correlated with the number of ISIS fighters it produces. Foreign recruits into terror organizations come largely from prosperous, ethnically and linguistically homogeneous countries.

Building on previous research that suggests that recruitment is driven by religious and political ideology, the researchers find that the more homogeneous the host country is, the more difficulties Muslim immigrants experience in their process of assimilation. This social isolation seems to induce radicalization, increasing the supply of potential recruits.

Although the researchers are unable to determine precisely why people join ISIS, their results suggest this difficulty of assimilation into homogeneous Western countries and ISIS's appeal to impressionable youth through its sophisticated propaganda machine and social media are major contributors.

What Explains the Flow of Foreign Fighters to ISIS?