Volatility and the Gains from Trade 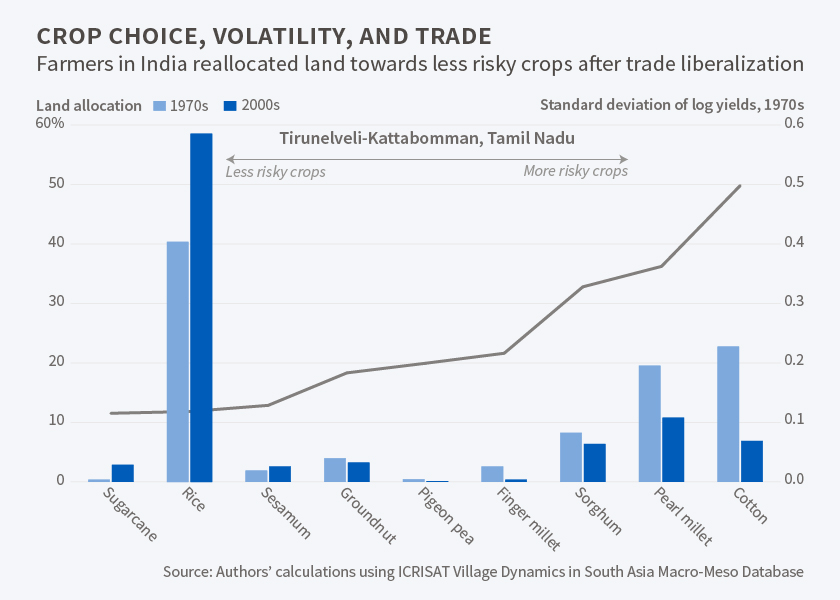 By strategically reallocating crops, Indian farmers were able to hedge against increased volatility and increase the total gains from trade by about 15 percent.

Trade between countries has steadily increased in recent decades. This has allowed producers to specialize and scale up, increasing average productivity and raising incomes in many places. However, it has also subjected producers to price fluctuations that are unrelated to local conditions, and potentially increased the volatility of their earnings.

In Volatility and the Gains from Trade (NBER Working Paper 22276), Treb Allen and David Atkin explore the effect of trade liberalization on the income volatility of farmers in rural India. They first demonstrate that expanding trade raises the earnings volatility. They then ask whether this effect magnifies or attenuates the gains from trade, and they study how Indian farmers react to the higher volatility of their earnings.

Using 40 years of agricultural data, from 1970 to 2009, the researchers show that improvements in the nation's highway system weakened the relationship between local rainfall and the market prices for local agricultural products. In the 1970s, when travel to India's major cities was more difficult, many Indian farmers were essentially isolated from global markets. Accordingly, high yields during rainy years typically meant that competitors also experienced high yields, putting downward pressure on local prices. High quantities coincided with low prices, and vice versa, which had a stabilizing effect on incomes. Following improvements to highways, farmers competed with more-distant producers, and local conditions played a smaller role in determining the prices they received for their output. This meant that years with high rainfall were especially good for farmers, but it also meant years with low rainfall were especially bad, as prices did not rise to compensate. This increase in earnings volatility is particularly significant in rural India, where most agricultural land is not irrigated and access to agricultural insurance is limited.

The researchers find that when faced with increased earnings volatility after highway infrastructure improvements opened their regions to trade, Indian farmers changed their crop allocation and moved away from riskier, more rainfall-dependent, crops. This reallocation occurred less in districts with better access to banks, suggesting farmers self-insure against income volatility to some extent when given access to credit.

The researchers model the farmers' choice of crops as a portfolio decision, and they find that had the farmers not reallocated their crops, the volatility effects of trade would have offset about 15 percent of the total gains from trade. However, by shifting to less risky crops, farmers were able to completely avoid this reduction in welfare, raising their total gains from trade by about 15 percent. The extent of such gains varied by location, however. The gains were smallest in districts where the most productive crops were also the most risky.

Volatility and the Gains from Trade