New Estimates of the Benefits of U.S. Highway Construction 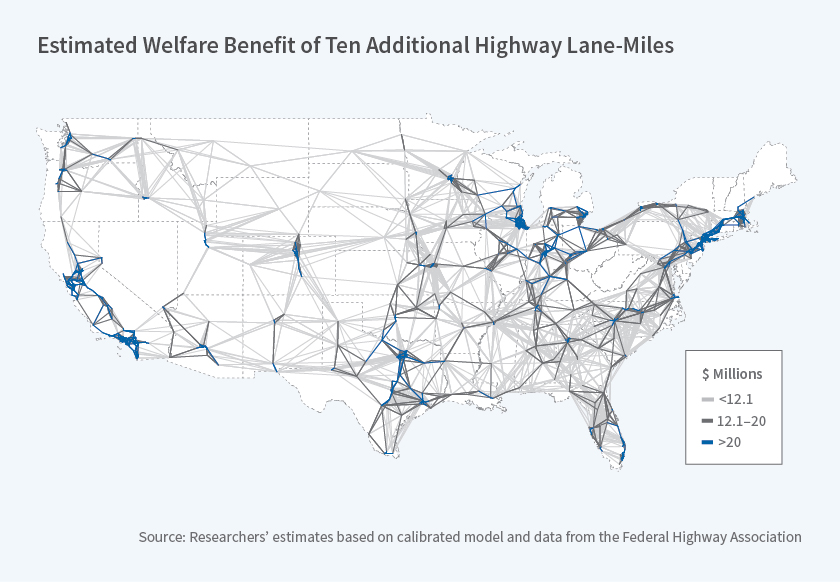 Even for highways in rural mountainous areas, the estimated economic benefits from adding an additional lane-mile exceed the annual construction and maintenance costs.

Federal, state, and local governments spent about $300 billion on construction and maintenance of U.S. transportation infrastructure in 2017. Highway spending alone totaled $177 billion, or about 0.9 percent of GDP.

Analyzing economic costs and benefits of highway spending is challenging because investment in even a small segment of a highway can affect traffic patterns and economic activity throughout the network.

In Welfare Effects of Transportation Infrastructure Improvements (NBER Working Paper 25487), Treb Allen and Costas Arkolakis approach this problem using graph theory and spatial analysis. Their framework allows them to estimate the benefits of improving each segment of the U.S. highway system while accounting for how such improvements have spillover effects on the entire network, thereby enabling them to identify the areas with the best returns on investment.

Using data from the Federal Highway Administration, the researchers calculate the shortest connection between every continental U.S. city with at least 50,000 people within 10 kilometers of a highway and its 25 closest neighbors. This "adjacency matrix" results in almost 7,000 connections between about 900 U.S. cities. They then calculate how an additional 10 lane-miles on each link would affect traffic patterns, travel times, and trade between all pairs of cities, and how the resulting change in the distribution of economic activity across cities benefits U.S. residents.

The researchers then compare these welfare changes to the construction costs of such highway improvements, which they estimate based on the surrounding natural topography. They sort each segment into one of four groups based on the surrounding land: urban, rural-flat (where the slope of the road is less than 5 percent), rural-rolling (slope between 5 and 15 percent), and rural-mountainous (slope greater than 15 percent). The annual construction and maintenance costs of 10 lane-miles of highway vary from about $1.9 million in rural-flat areas to $6.5 million in rural-mountainous areas.

The researchers find that the estimated economic benefits of improving any segment of the U.S. highway network exceed the estimated construction and maintenance costs. However, the variation in the returns on investment is substantial. For about three-quarters of all highway segments, adding 10 additional lane-miles generates benefits valued at between $10 million and $20 million.

For some highway segments, however, the returns are much larger. The gains tend to be largest in areas where roads connect large economic hubs where few alternative routes exist. Two segments near New York City have welfare benefits exceeding $500 million a year. Expanding the Long Island Expressway (I-495W) between North Hempstead and Queens has an estimated economic value of $719 million. Expanding a segment of I-287W between White Plains and Greenburgh has an estimated value of $510 million. In fact, of the top 10 segments with the highest rate of return, seven are in the New York City area, and one is near Los Angeles. The other two are in Indiana, which, as the researchers point out, lends some credence to the state's nickname as the "Crossroads of America."

Although many segments with the largest net benefits are located on the East Coast and in southern California, the research also highlights highways within a particular region with the highest estimated rate of return. Such information may be particularly relevant for targeting the allocation of public resources.