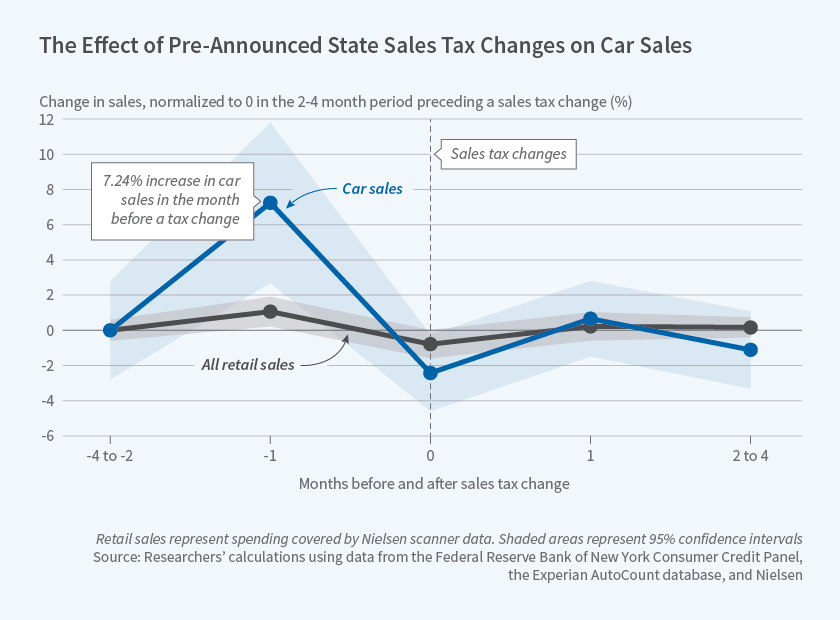 Announcing sales tax increases before they take effect substantially spurs auto purchases in the month before the tax increase kicks in.

What can government authorities do if central bank interest rates are at zero and regulators still wish to stimulate the economy? Scott R. Baker, Lorenz Kueng, Leslie McGranahan, and Brian T. Melzer study the impact of pre-announced sales tax increases on new auto purchases. They find that such tax increases accelerate household consumption, bringing future purchases to the present, and potentially increasing demand during downturns.

In Do Household Finances Constrain Unconventional Fiscal Policy? (NBER Working Paper 25212), the researchers find that households respond to anticipated sales tax increases on automobiles with a substantial increase in purchasing in the month prior to the announced increase and a decrease in the month of the tax hike.

In the United States, state and local sales taxes on automobiles are collected where the vehicle is registered, not where it is sold. States, counties, cities, and local districts responsible for schools, water, and sewerage may all collect sales taxes. States that collect a motor vehicle excise tax rather than a sales tax were omitted from the study sample.

Tax data were combined with data from the Federal Reserve Bank of New York Consumer Credit Panel/Equifax tradeline database, a 5 percent random sample of individuals who have an Equifax credit report. The data include both secured and unsecured loans and lines of credit. Assuming that an auto loan initiation leads to an auto purchase, the researchers measure the number of new auto loans in each month by zip code and credit score.

They find that the increase in new auto sales in anticipation of a sales tax increase is large, at least 8 percent for every 1 percent increase in the sales tax. Purchases of the most creditworthy households are more than twice as responsive as the purchases of the least creditworthy households, suggesting that credit frictions affect households' ability to re-time their purchases. In addition, the researchers find that the overall sales response to a 1 percent tax increase is twice as large during recessions, which implies that the spending effect of pre-announced taxes might be particularly large during economic downturns.

The researchers caution that most of the sales tax increases in their sample were small, and that announcing a large tax increase might have different effects than those associated with the tax changes in their study.