The News about Equity Market Volatility Is Changing 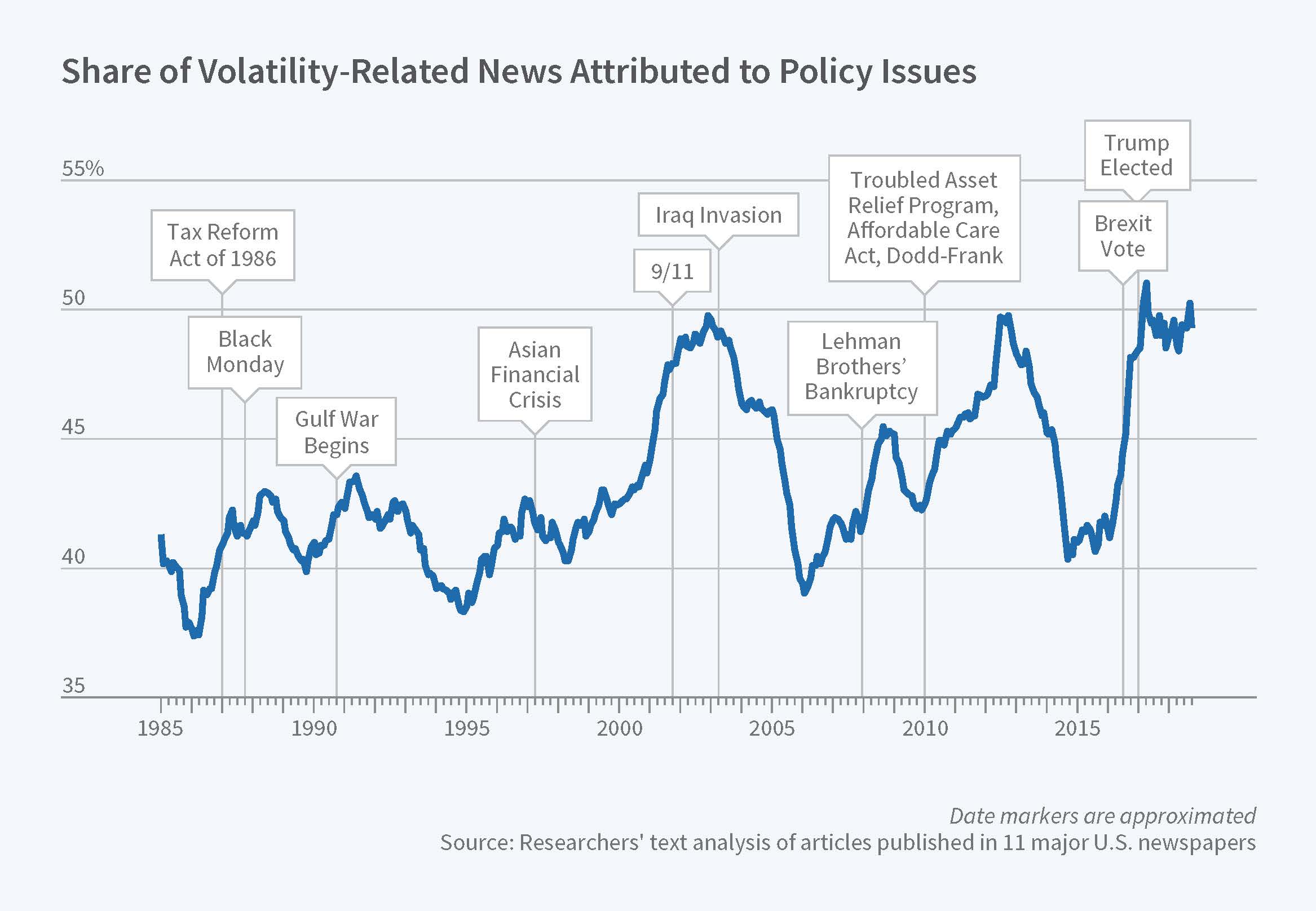 Press reports on contributors to market volatility have long emphasized news about GDP, inflation, and other economic aggregates, but news about policy has become increasingly important.

The researchers create an Equity Market Volatility (EMV) tracker that links articles about economic, political, and national security developments to the VIX index, a measure of expected stock market volatility based on option prices. In Policy News and Stock Market Volatility (NBER Working Paper 25720), they report that movements in their EMV tracker closely mirror the ups and downs in the realized and option-implied volatility of the S&P 500 between January 1985 and October 2018.

The EMV tracker is constructed by searching articles published in 11 major U.S. newspapers, including The New York Times, the Los Angeles Times, The Dallas Morning News, and The Wall Street Journal.

The researchers classified the EMV articles into about 30 categories of factors that influence volatility. These included 10 related to general economic factors, such as macroeconomic news, labor disputes, and financial crises. The rest related to political or policy factors such as taxes, government spending, and monetary policy. Each category is associated with a set of search terms. In most cases, journalists who authored the articles tied instability to factors in multiple categories.

The share of news stories about market volatility that fell into each category fluctuated over time. For example, the period since the 2016 election has seen a sharp increase in trade policy concerns as an apparent source of market volatility.

The researchers created not just an overall EMV tracker, but several category-based versions as well. The EMV tracker for macroeconomic news jumped in response to the October 1987 market crash, the Russian financial crisis, and the 2008-09 global financial crisis. In contrast, it registered little reaction to the Enron and WorldCom scandals. The "financial crisis" EMV tracker has registered consistently higher volatility in the years since the 2008-09 meltdown, but it also reacted strongly to earlier crises such as those involving the Mexican peso in 1994 and the Russian and Asian financial crises in 1997-98. An EMV tracker for petroleum markets, using such search terms as oil, Alaska pipeline, and Keystone pipeline, mirrors most movements in oil-price volatility but missed badly during times of economic crisis like the 1987 stock market crash and the 2008-09 global financial crisis.

News about policy matters is an important and growing contributor to volatility. The researchers find that 35 percent of EMV articles refer to fiscal policy, mostly taxes, 30 percent discuss monetary policy, 25 percent refer to one or more forms of regulation, and 13 percent mention national security. They find "an upward drift over time" in the share of articles about market volatility that discuss policy matters, with a peak contribution of policy matters in 2017-18.