Labor Market Effects of a Hurricane-Induced Rise in Immigration 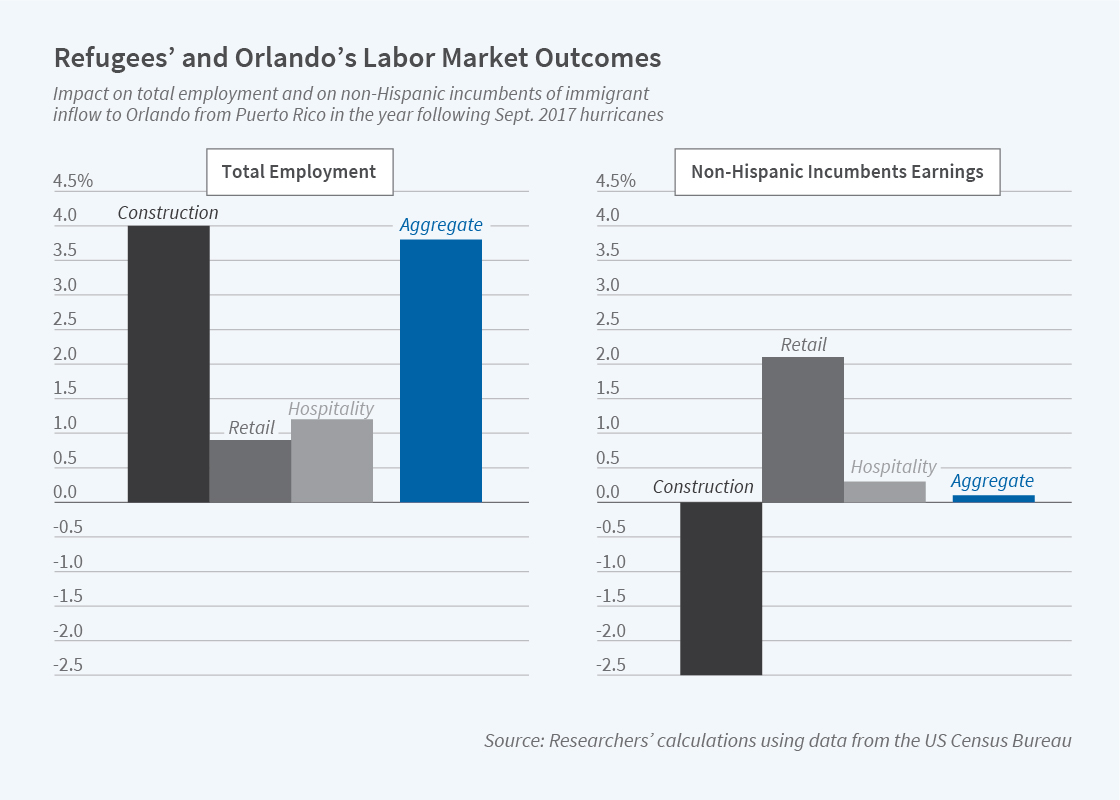 An influx of migrants lowered wages of incumbent less-educated workers in the construction sector, but wages rose in retail and hospitality.

In September 2017, Hurricane Maria struck Puerto Rico, causing extensive loss of life and property and displacing hundreds of thousands of individuals. In the following months, more than 120,000 Puerto Ricans migrated to the US mainland.

In The Economic Impact of Migrants from Hurricane Maria (NBER Working Paper 27718), Giovanni Peri, Derek Rury, and Justin C. Wiltshire examine the short-run economic impact of this sudden migration event on Orlando, a Florida city that they estimate received approximately 24,000 migrants. They focus on the local labor market impact of this influx of migrants. There has been much previous study of the effects of the massive migration of Cubans to Miami in the Mariel boatlift of 1980.

The Puerto Rican migration is more recent, and, the researchers observe, the economy of Orlando in 2018 was more comparable to that of other current US metropolitan areas than was the Miami economy in 1980. In addition, unlike the Cubans of 1980, the Puerto Rican migrants have levels of education similar to those of mainland US workers. Because they were already US citizens, they also had immediate access to the labor market and other benefits of citizenship. This would increase their potential crowding-out impact on other workers, relative to migrants who were not citizens.

The researchers employed data from the Quarterly Census of Employment and Wages and the Quarterly Workforce Indicators, county-by-industry-level administrative data covering more than 95 percent of all workers. They found that following the arrival of the migrants, employment in Orlando increased, especially in construction and retail, and that there were positive aggregate labor market effects for non-Hispanic and less-educated workers. The construction sector was the most likely to experience a sudden increase in labor supply in the short run. One year after the migration event, the data indicate a negative impact on construction sector wages of incumbent non-Hispanic workers of 2.5 percent. This was balanced by earnings growth in retail and hospitality: retail earnings increased for incumbent and less-educated workers by 2.1 percent and 0.3 percent, respectively, over the same period.

Across all sectors and workers, the researchers find no evidence of a negative impact on wages despite the large and sudden influx of thousands of new workers into the region, suggesting that the sector-specific positive wage effects at least offset the negative ones in the aggregate. They estimate a 0.8 percent increase in aggregate employment one year after the hurricane for incumbent non-Hispanic and for less-educated workers. The findings suggest that migrants put modest downward pressure on earnings in sectors most exposed to the new labor supply, while having positive effects on employment and earnings for workers in sectors that meet their demands as consumers.

The Economic Impact of Migrants from Hurricane Maria