Consumption Inequality and the Frequency of Purchases 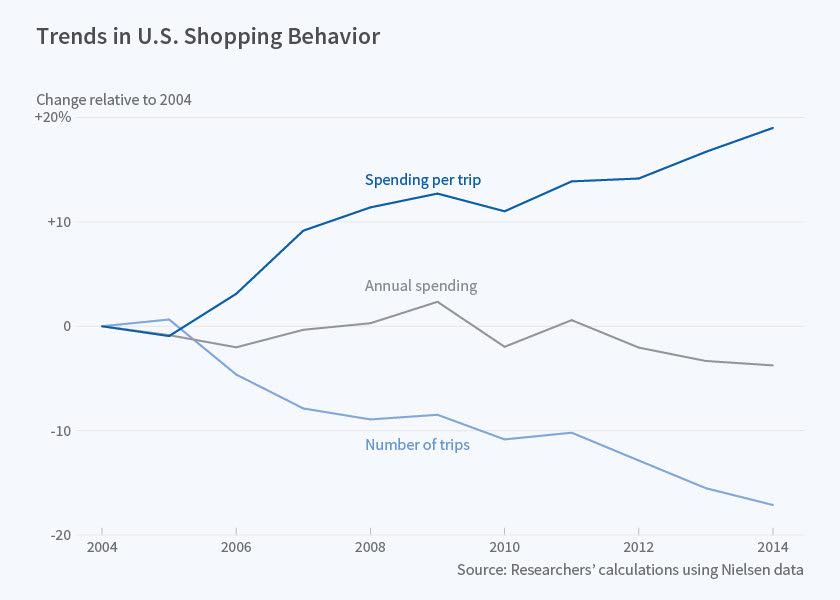 While annual consumer spending was approximately constant over the period 2004 to 2014, the number of shopping trips declined and average spending per trip increased.

Can these different survey findings be reconciled? In Consumption Inequality and the Frequency of Purchases (NBER Working Paper No. 23357), Olivier Coibion, Yuriy Gorodnichenko, and Dmitri Koustas analyze surveys of shopping patterns since 1980 and find that "when household spending is aggregated over the course of the year, there is essentially no trend in inequality." What's behind the divergence in consumption inequality surveys, they find, is that Americans are shopping less frequently and buying more on each shopping trip. A major factor in this pattern, they add, is the emergence and spread of club/warehouse stores that sell items in bulk.

The researchers focus on seemingly contradictory data collected under two distinct components of the Consumer Expenditure Survey (CEX), a U.S. household survey conducted by the Bureau of Labor Statistics. According to the CEX Diary Survey, which is based on household records of spending every two weeks, the consumption gap between high- and low-consumption households has grown since 1980. In contrast, data from the CEX Interview Survey, which queries households quarterly about their spending at monthly or quarterly frequency, depending on the spending category, display very little increase in inequality.

Why the difference? The researchers find in the Diary Survey that the fraction of days on which households shop for nondurable goods has been falling. This is a general finding, which obtains across various demographic groupings based on age, race, and income. This pattern is also evident in Nielsen Home Scanner data drawn from daily records of participants' purchases over the course of a year.

"While annual spending is approximately constant over 2004-14, we see that the number of shopping trips declines by close to 20 percent, while the average spending per trip increases by the same amount," the researchers report. Most of the higher spending reflects an increase in bulk purchases.

The advent of club stores has offered consumers an opportunity to stock up on staples and other goods that can be stored or frozen. The researchers find that the increased prevalence of club/warehouse stores since the early 1980s accounts for approximately 40 percent of the rise in measured inequality in expenditures. They further note that competition from club stores has spurred traditional stores to offer more in bulk.

The Bureau of Labor Statistics' American Time Use Survey, which has been conducted since 2003, further confirms that shopping patterns have changed. The researchers conclude that "households do fewer trips per day and are less likely to go to any store on any given day."

The researchers suggest several factors other than the rise of club stores that may be contributing to the decline in shopping frequency, including greater traffic congestion, which discourages shopping trips; increasing ownership of large refrigerators, freezers, and houses with more storage space; and expanded access to credit, all of which enable more households to take advantage of bulk discounts.

They also note that the growth of online retailing and home deliveries may reverse, or at least balance, the trends in shopping documented in their paper, as the reduction in fixed costs of shopping produced by such services could encourage high shopping frequency with lower total purchases per shopping experience.

Consumption Inequality and the Frequency of Purchases