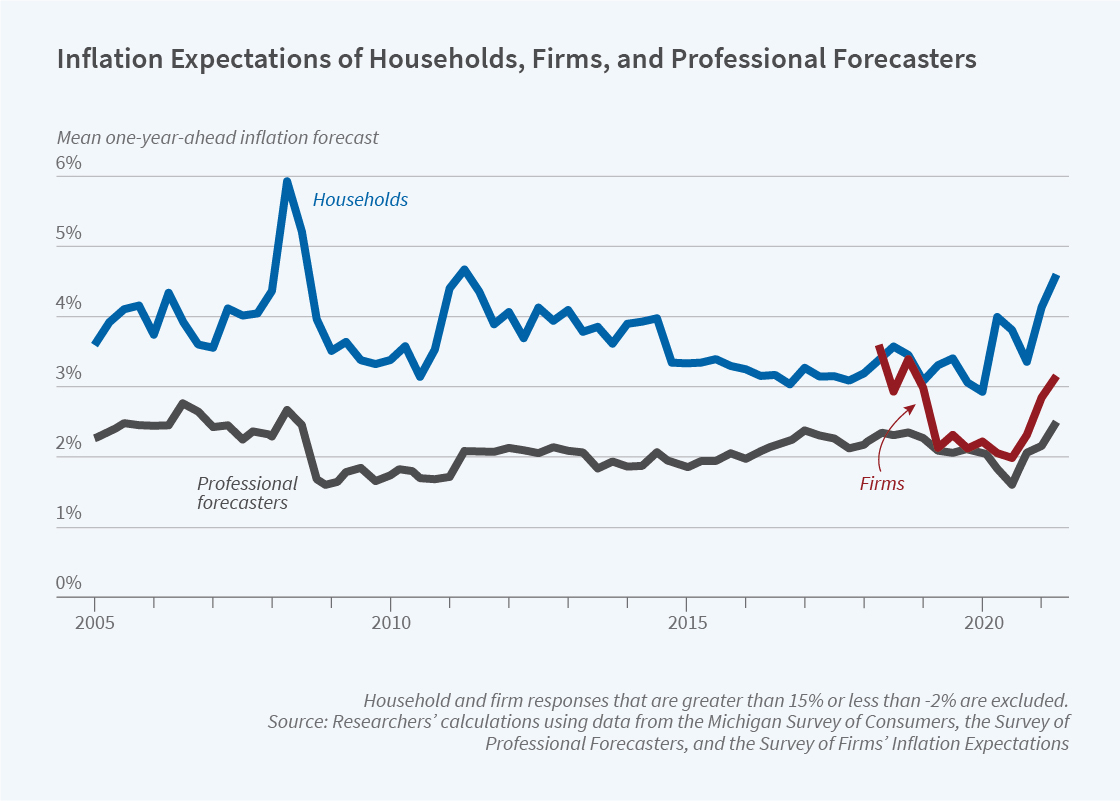 Survey data suggest that most CEOs are unaware of the current rate of inflation and of the Fed’s inflation goals and that their inflation expectations differ from those of households and professional forecasters.

Bernardo Candia, Olivier Coibion, and Yuriy Gorodnichenko address this gap in The Inflation Expectations of US Firms: Evidence from a New Survey (NBER Working Paper 28836). They analyze the first nationally representative survey of inflation expectations among US firms and find that managers are strikingly inattentive both to recent inflation and to monetary policy.

The researchers introduce the Survey of Firms’ Inflation Expectations (SoFIE), a module of questions on inflation appended to a leading pre-existing private survey of CEOs and senior business leaders. As a part of that survey, the SoFIE has been collected quarterly since April 2018, with between 300 and 600 firms participating in each survey. To date, 1,198 firms have participated overall. The survey includes firms of all sizes and, for historical reasons, oversamples firms in manufacturing. In addition to CEOs’ beliefs about inflation in the next year, the SoFIE also collects their expectations of average annual inflation over the coming five years, an important metric for how anchored inflation expectations are.

Firms’ inflation expectations, like those of households, show little evidence of anchoring. Besides often being well above the Fed’s 2 percent target set in 2012, CEOs’ long-run expectations vary widely across firms. Moreover, CEOs are not especially confident in their predictions. Aggregating across all surveys since 2018, the researchers find that the CEOs believed there was a 25 percent chance that the year-ahead inflation rate would exceed 5 percent, an outcome that was sharply at odds with the views of professional forecasters during most of this period. CEOs’ inflation expectations also are revised substantially from year to year, which again casts doubt on anchoring. The correlation between the revisions to the one-year and five-year inflation predictions is larger than the correlation that is consistent with the historical persistence of inflationary shocks. CEOs also display widely dispersed perceptions of inflation over the previous 12 months, even though that information is freely available. In short, the properties of managers’ and households’ inflation expectations are similar.

CEOs lack anchored expectations in part because they are uninformed about monetary policy. When asked to state the Fed’s inflation target, about 65 percent of respondents said they didn’t know or were not willing to provide an answer; fewer than 20 percent gave a value between 1.5 and 2.5 percent. CEOs also appear to have limited knowledge about recent inflation, with many managers understating or overstating inflation by more than 1 percentage point. Both of these forms of inattention help to explain the apparent lack of anchoring in firm expectations. CEOs’ beliefs about recent inflation most strongly predict their short-run expectations, while beliefs about the Fed’s inflation target predict their long-run expectations. Firms’ inattention to inflation may be a reflection of the low and stable inflation of recent years, which has provided firms with little incentive to focus scarce attention on monetary policy and inflation dynamics.

The Inflation Expectations of U.S. Firms: Evidence from a new survey