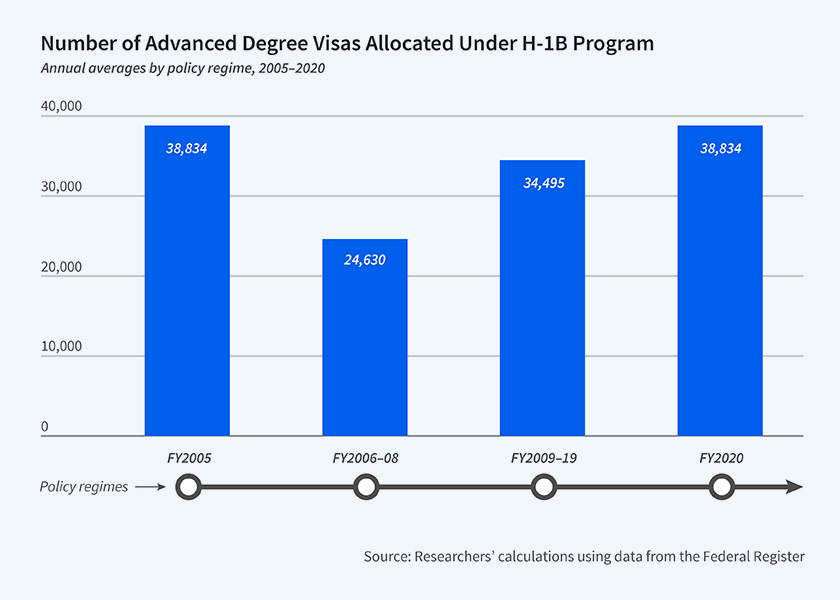 A 2019 reform to the H1-B allocation rules, the fourth change in 15 years, gives high-skill applicants the highest possible chance of securing a visa.

Launched as part of the Immigration Act of 1990, the H-1B visa program is intended to satisfy demand for workers with a bachelor’s degree or higher in occupations that require specialized technical knowledge. With the H-1B Visa Reform Act of 2004, Congress capped the number of permits at 85,000 a year, with 20,000 reserved for applicants who had earned an advanced degree from a US university. In 2019, the US Department of Homeland Security, which administers the program, altered the rules for allocating H-1B visas in an effort to increase the share that went to advanced-degree recipients.

In Immigration Lottery Design: Engineered and Coincidental Consequences of H-1B Reforms (NBER Working Paper 26767), Parag A. Pathak, Alex Rees-Jones, and Tayfun Sönmez study the visa allocation methods using tools from the field of market design. They point out that there are several different ways to run the H1-B lottery, all of which comply with the 1990 law. These different approaches to lottery implementation can significantly affect the outcome; the researchers demonstrate this by estimating the number of high-skill and not-high-skill applicants who would be admitted under various approaches. They find that while Congress established rigid caps for the total number of H-1B visas, the numbers granted to higher-skilled workers versus those who were less skilled could vary by as much as 14,000 a year, depending on the visa allocation process.

To illustrate the importance of lottery design, the researchers first consider the allocation method that was used in 2005, when the unreserved cap of 65,000 was filled on a first-come, first-served basis among a mix of higher- and lower-skilled workers. At that point, 20,000 additional slots were allocated exclusively to higher-skilled workers.

To quantify the differences between these two alternative ways to run the lottery, the researchers consider an average year during the 2013–17 period when there were 87,380 applicants who were high skill and fell in the reserved category for high-skill workers, while there were 111,080 in the general category. Under the 2005 lottery rules, 38,834 higher-skilled workers would have received visas; under the 2006–08 first-in scenario, the number would have fallen to 24,630.

In 2008, the immigration service changed the allocation process. With 150,000 visa applications being overnighted for the first day of acceptance, there was no way to determine the order of arrival. Instead of basing priority on timing, the service announced it would hold two lotteries to allocate all visa petitions submitted during the first five days of April. In the first lottery, the 20,000 reserved slots were distributed among the higher-skilled workers. In the second lottery, the 65,000 unreserved visas were allocated among the remaining higher-skilled workers and the lower-skilled workers.

The new policy increased the share of higher-skilled workers overall by giving them two opportunities to win a visa: once in competition with only high-skill applicants, and a second time (if they lost the first time) in competition with all applicants. Again using the recent averages, the researchers estimate that this lottery scheme would allocate 33,495 visas to higher-skilled workers, a significant gain over the 2006–08 lottery method.

The 2019 reform tweaked the allocation system by reversing the order of lotteries. Held first instead of second, the unreserved lottery drew from a pool with a greater representation of highly skilled applicants — 20,000 more, to be precise — than under the previous sequence. That reform produces 38,834 visas for higher-skilled workers, more than 5,300 visas more than in the previous system.

The findings illustrate the importance of market design, such as the design of the H1-B lottery mechanism, in allocating scarce resources.