Effects of a Summer Youth Employment Program in NYC 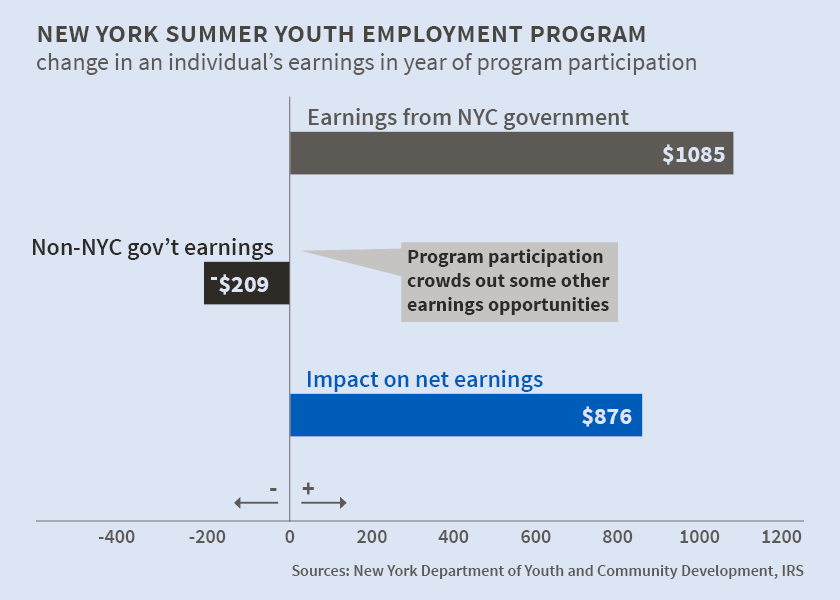 Participation decreases the probability of incarceration and mortality, which has important implications for analyzing the net benefits of the program.

Three primary justifications are offered for such programs. One is to provide income support to youth and their families through wages earned in the program. Another is to foster summer work experience that could improve future employment outcomes, particularly for disadvantaged youth who would otherwise have low summer employment rates, or improve educational outcomes. Some feel such opportunities might also help to keep program youth involved in socially productive activities and out of trouble, potentially improving outcomes like incarceration and mortality rates.

The investigators find that youth program participation results in increases in average earnings and in the probability of employment in the year of program participation. Per person earnings average $1085 during the year of participation. There is modest contemporaneous crowd-out of earnings from jobs that are not associated with the program - an earnings decline of $209. Those who won the lottery had a 71 percentage point greater probability of employment than those who did not. Participation causes a moderate decrease in average earnings for three years following the program and has no impact on college enrollment. Participation also decreases the probability both of incarceration and mortality, outcomes that have important implications for analyzing the program's net benefits. The decline in the probability of incarceration is 0.1 percentage points - about a 10 percent reduction relative to the baseline incarceration rate. The decline in the probability of mortality is 0.08 percentage points - about a 20 percent reduction relative to the baseline mortality rate. Under standard cost-benefit analysis, the benefits from the reduction in mortality are very large - certainly at least of the same order of magnitude as the combined costs of the program.

The authors point out that as more years of data from youth program participation accumulate, it will become possible to investigate longer-term impacts of the program on cause of death and arrest experience. They also suggest that it would be of interest to use a randomized design to investigate whether the type of job into which an individual is placed has an effect on subsequent earnings and on career trajectories.