The Effect of Disability Insurance Payments on Beneficiaries' Earnings 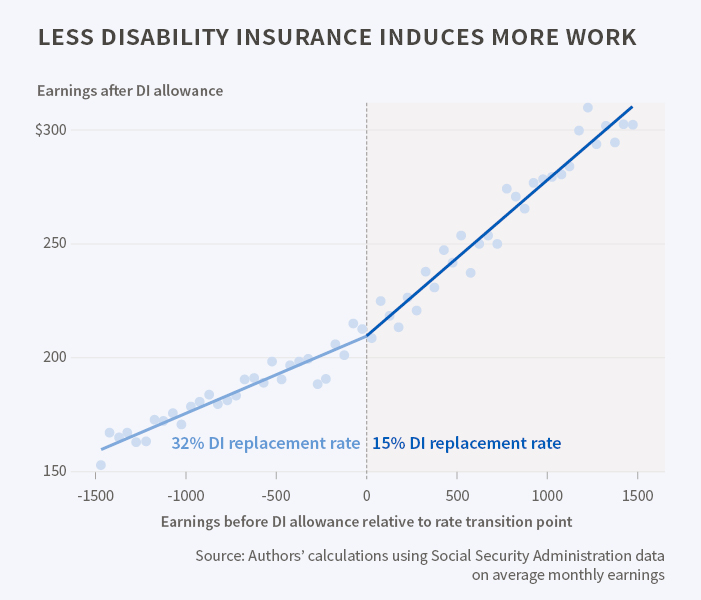 When the fraction of earnings replaced by disability insurance benefits is lower, earnings are higher among some disability-payment recipients who were previously high earners.

Disability insurance protects workers against unfavorable health shocks that make it difficult or impossible to work, but it can also affect work incentives among those who, while disabled, may still be able to participate in the labor market. Some beneficiaries may reduce their work effort either as a result of program rules that limit their labor market activities, or because the income they receive from disability insurance reduces their need for earned income.

In The Effect of Disability Insurance Payments on Beneficiaries' Earnings (NBER Working Paper 21851), Alexander Gelber, Timothy Moore, and Alexander Strand use changes in the payment structure of U.S. Social Security Disability Insurance to examine whether the amount of disability insurance income affects labor supply decisions. They conclude that disability payments have a "clear, robust, and substantial income effect" on earnings among some beneficiaries who had relatively high earnings prior to the onset of disability. They find that for individuals in this group, a $1 increase in disability payments decreases individual earnings by an estimated 20 cents.

A beneficiary's disability insurance payment depends upon average earnings in the highest-earning years before becoming disabled, which is known as Average Indexed Monthly Earnings (AIME). An additional dollar of AIME raises benefits by 90 cents, up to AIME of roughly $850 a month; by 32 cents from about $850 to $5,157; and by 15 cents above that. This study focuses on beneficiaries at the 32 to 15 percent transition point, where the average monthly disability payment is $2,147 ($25,761 per year).

The study analyzes all disability beneficiaries who entered disability insurance between 2001 and 2007 who were not enrolled in Supplemental Security Income (SSI); 610,271 observations were available with AIME within $1,500 of the 32 to 15 percent transition point. The researchers examine earnings behavior at the 32 to 15 percent transition point rather than at the 90 to 32 percent point because the decision to work at the lower transition point is affected both by earnings and by changes in benefit eligibility in a variety of programs, including SSI and Medicaid.

The researchers use their estimates to calculate how shifting to a less generous cost-of-living adjustment formula, in particular one that used the chain-weighted Consumer Price Index instead of the current CPI, would affect disability program beneficiaries. They illustrate this by assuming that such a change would reduce benefits by about three percent for those who have received disability benefits for ten years. For those near the upper transition point, this would mean an average annual benefit cut of about $638; the researchers conclude that this benefit cut would lead beneficiaries to increase their annual earnings by about $128 on average. Although this is substantial relative to the illustrative reduction in benefits, it represents a very small increment to living standards, equivalent to about one percent of the federal poverty level for individuals, and less than one percent of the poverty level for families. Assuming that the federal combined income and payroll marginal tax rate is 25 percent, the increase in earnings would raise total federal annual revenues by a modest $32 per beneficiary.

The Effect of Disability Insurance Payments on Beneficiaries’ Earnings