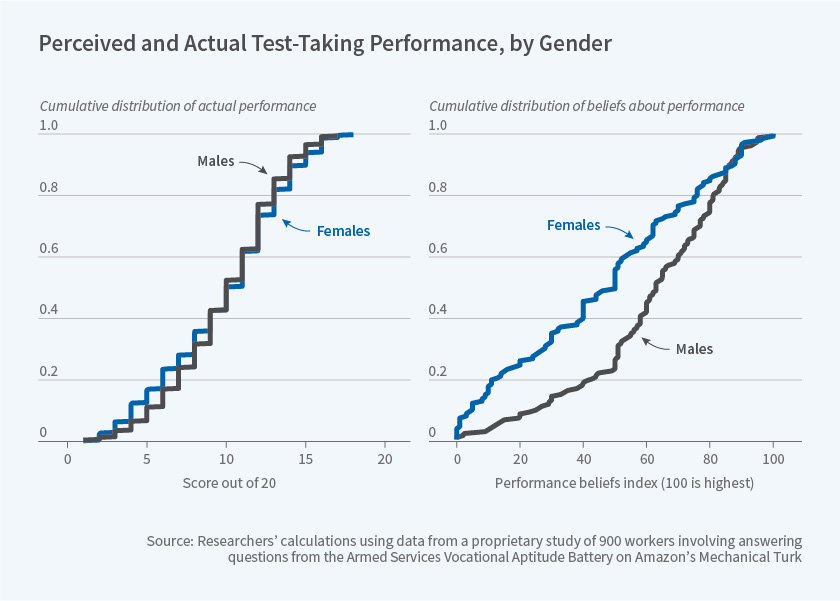 When asked to describe their performance on a test, women reported that they performed worse than men, when on average the scores were equal.

As workers advance in their careers, they often are called upon to engage in self-promotional activities, such as job interviews and annual reviews, during which they must self-assess their performance and abilities. In situations like those, women systematically provide less favorable self-assessments than equally-performing men, according to Christine L. Exley and Judd B. Kessler in The Gender Gap in Self-Promotion (NBER Working Paper 26345). The study shows a large, persistent gap between female and male respondents in self-promotion, which is defined as communicating one's abilities and potential for success.

Nine hundred online survey participants took part in one of three different experiments. In all three, participants answered 20 questions from the Armed Services Vocational Aptitude Battery (ASVAB) test, and then reported how many ASVAB questions they believed they answered correctly. They then gave additional responses subjectively assessing their performance, which indicated their level of self-promotion.

In one experiment, the participants were told that one of their answers to the self-promotional questions would be the sole criterion used by prospective employers to determine who would be hired and what they would be paid. In this case, which the researchers call the public case, women were much more likely to report lower performance than men, despite their having similar scores. For example, when asked how much they agreed with the statement "I performed well on the test" on a scale of 1 to 100, the average woman ranked her performance at 46 while the average man reported a 61, a 33 percent difference. In reality, among both the female and male participants the average respondent answered 10 of the 20 test questions correctly. This gender gap in self-promotion persisted across the various performance assessment questions. The researchers rejected the idea that self-promotional differences are caused by a gap in confidence between women and men, because it persisted even when the participants were given full access to their scores and their performance relative to others.

In a second experiment, there was no employer role and therefore no incentive to boost one's performance evaluation; this was termed the private version by the researchers. In a third, the respondents were told that potential employers might get their actual performance as well as their performance evaluation; this they called the ambiguous version. In both scenarios, women still under-promoted compared to equally performing men. While overall self-promotion for both men and women was lower, the gender gap in self-promotion remained steady across all three versions of the study.

The Gender Gap in Self-Promotion