How Did the COVID Pandemic Affect the Number of Births? 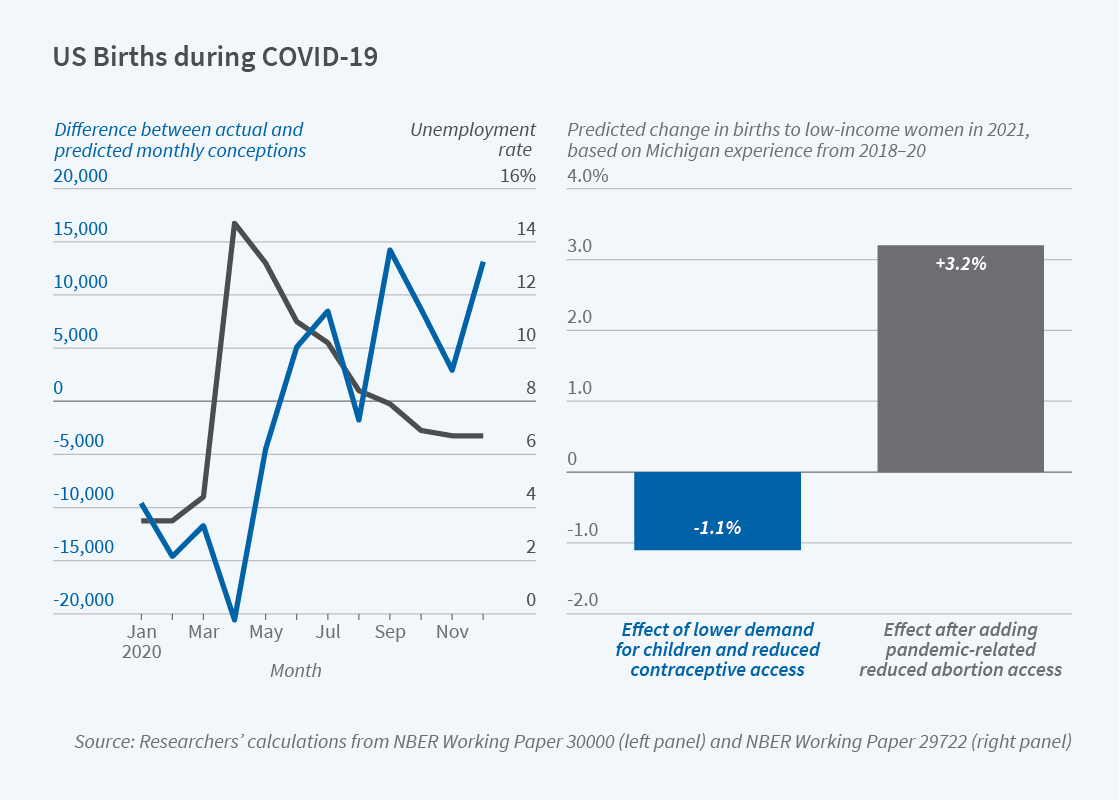 The COVID-19 pandemic has had important effects not just in hospital intensive care units, but in maternity wards as well.

In The US COVID-19 Baby Bust and Rebound (NBER Working Paper 30000), Melissa Schettini Kearney and Phillip B. Levine document a large drop in births associated with conceptions during the first several months of the pandemic.

In The Missing Baby Bust: The Consequences of the COVID-19 Pandemic for Contraceptive Use, Pregnancy, and Childbirth among Low-Income Women (NBER Working Paper 29722), Martha J. Bailey, Lea J. Bart, and Vanessa Wanner Lang suggest that reduced access to reproductive health services likely resulted in more births among disadvantaged women than would have been expected given the economic slowdown.

Kearney and Levine study monthly births from October 2016 through December 2021 and calculate the gap between actual births during the pandemic and the number that would have been expected based on pre-pandemic trends. They date all births to the likely month of conception.

They estimate a “birth gap” of 62,000 conceptions during the early months of the pandemic. The low point was April 2020. Conceptions leading to live births rebounded from June to December 2020; there were 51,000 more births than projected.

Several factors might explain these patterns. The jobless rate jumped from 3.5 percent at the start of 2020 to 14.7 percent in April 2020; it dropped to 6.9 percent in October 2020. Federal stimulus payments to households, and the public health crisis itself, may have altered families’ childbearing plans.

The researchers use state-level data to analyze how these factors contributed to the initial baby bust and subsequent rebound. During the initial bust period, states with larger drops in household spending, and stronger COVID outbreaks, experienced larger declines in conceptions leading to live births. The drop was greatest in New York, the epicenter of the early pandemic in the US.

In the rebound period, the strengthening labor market played an important role. In states where the unemployment rate fell most and household spending recovered most, conceptions leading to live births rose most. The COVID case rate had a smaller relationship to birth rates during the rebound period than earlier.

States where births fell most at the onset of the pandemic are not the ones where they rose most several months later, contrary to the view that families simply postponed births.

Bailey, Bart, and Lang observe that the pandemic is likely to have affected birth rates through channels other than the associated recession. In particular, they hypothesize that reduced access to contraception due to clinic closures during the pandemic increased birth rates. To gauge the impact of such closures, they draw on a pre-pandemic study in Michigan that analyzed how the use of contraception by low-income, uninsured women changed before and after a visit to a Title X health clinic. Title X is a federal program subsidizing reproductive health care. The Michigan study found that a typical subsidized visit to a health center affected the practice of contraception and resulted in eight fewer pregnancies per 100 patients.

To compare the potential importance of clinic closures and the pandemic-related economic downturn, the researchers apply Kearney and Levine’s method of analyzing historical birth patterns. They estimate that births among low-income women would have fallen by 8 percent during the 2020 recession had there been no change in their access to contraception. Allowing for the impact of anxiety about COVID raises this estimate to more than 9 percent: 16,250 fewer births nationwide. To account for the impact of clinic closures during the pandemic, which reduced access to contraception, they extrapolate the Michigan experience to the nation’s Title X population. Accounting for variations in demographics, they estimate that cutbacks in reproductive care could have raised the number of births among low-income women by 14,350. On balance, they predict a net decline from the pandemic recession as well as reduced contraception access of fewer than 2,000 births, or 1.1 percent, in the low-income population.

The US COVID-19 Baby Bust and Rebound
The Missing Baby Bust: The Consequences of the COVID-19 Pandemic for Contraceptive Use, Pregnancy, and Childbirth among Low-Income Women