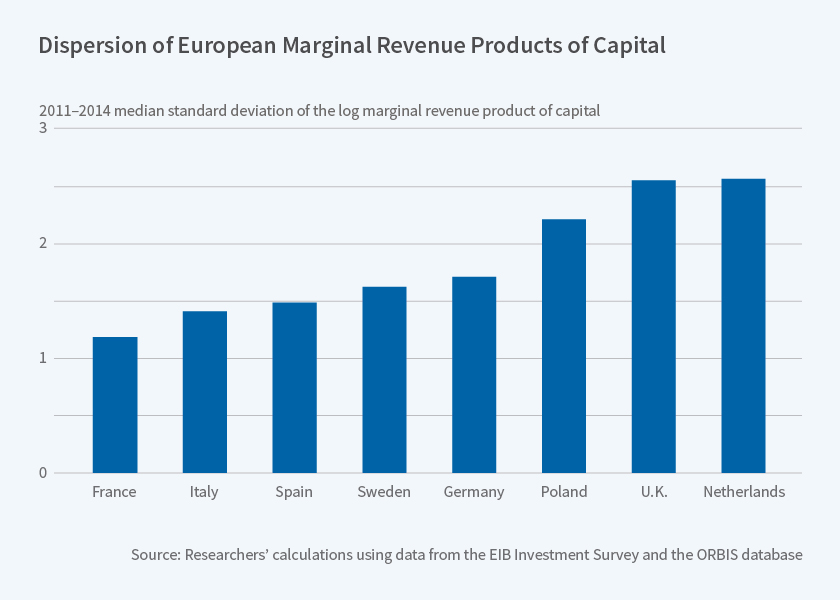 Nation- and industry-specific barriers keep resources from flowing to the most efficient firms in the European Union. Their complete elimination could boost EU GDP by almost one-third.

European companies vary widely in output per unit of capital and labor, which means that the European Union (EU) does not produce as much as it could if resources were allocated more efficiently, according to Resource Misallocation in European Firms: The Role of Constraints, Firm Characteristics and Managerial Decisions (NBER Working Paper No. 24444).

The cross-firm spread in labor and capital productivity in EU countries is about twice as large as that in the U.S., Yuriy Gorodnichenko, Debora Revoltella, Jan Svejnar, and Christoph T. Weiss calculate. Reducing the EU dispersion to US levels — a change that would likely require many significant policy reforms — could increase the EU's GDP by more than 30 percent.

To understand why firm productivity varies so widely, the researchers survey a random sample of firms in each of the EU's 28 nations and match the survey answers to an administrative database with firm-level information. This makes it possible to assess how well firm characteristics, as well as industry-level and country-level variables, can explain firm-level productivity. The variables that help to explain the variation in firm productivity include firm demographics, measures of input quality, capacity utilization, and indicators of the dynamic adjustment of inputs. For example, an older firm with a dated capital stock may be less efficient than a newer firm with state-of-the-art technology and recently acquired capital. Higher capacity utilization is also associated with higher productivity.

The researchers find that when they constrain the effects of these variables to be the same in all EU countries, firm-level characteristics can explain 11.2 percent of the variation in MRPK, and 27.1 percent of the variation in MRPL. When they allow the effect of firm-level variables to differ across countries, so that the effect of a rise in capacity utilization influences the predicted productivity of a German firm differently than an Italian firm, they can explain most of the variation in productivity. The researchers show that, in terms of labor allocation, firms are more segmented across countries than across industries, as seen in the fact that differences in the levels of MRPL are higher across countries than across industries. The opposite is true for capital. This suggests that national regulations and language barriers could play an important part in the efficiency of resource allocation within the EU.

They also find that measures of each country's business, institutional, and policy environment contribute to explaining the dispersion of firm productivity.