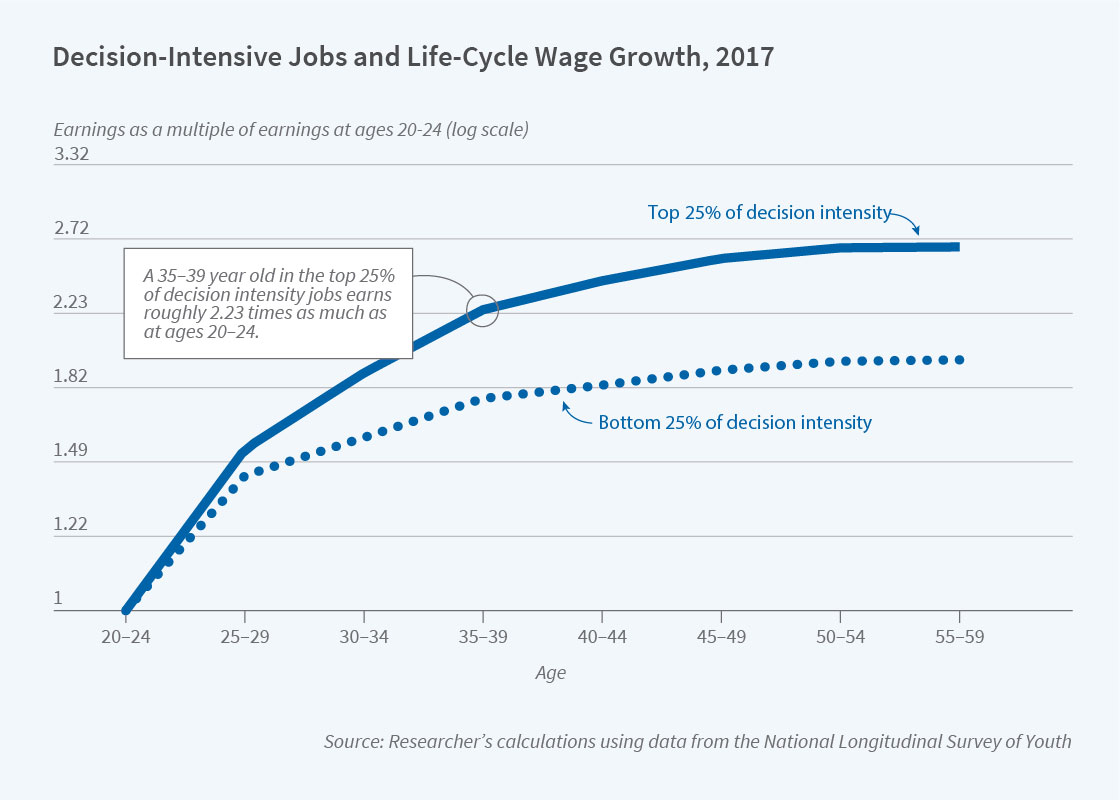 Peak annual earnings relative to early-career earnings more than doubled between 1960 and 2017, largely due to an economy-wide shift toward jobs that place workers in decision-making roles.

As automation has improved, machines increasingly have substituted for workers in jobs involving routine tasks predictable enough to be scripted ahead of time. The tasks required of those in the remaining jobs are increasingly open-ended, and doing good work requires the ability to make good decisions. In The Growing Importance of Decision-Making on the Job (NBER Working Paper 28733), David J. Deming calculates that the share of jobs requiring employees to be able to make these good decisions rose from 6 percent in 1960 to 34 percent in 2018. Nearly half of the increase occurred after 2007. He also explains why the increase in open-ended work has produced substantial changes in employee compensation and lifetime earnings growth.

Employers have become more willing to pay a premium for experienced, higher-skilled employees with greater cognitive ability because jobs now require more, and more accurate, decisions. More experienced employees have more data on which to base their decisions, reducing decision errors. Better cognitive ability enables better learning in new environments and reduces susceptibility to behavioral biases like overweighting the outcomes of successful past decisions and underestimating the extent to which various sources of information may be correlated.

In 1960, cumulative earnings growth for workers aged 20–59 peaked at just over 40 percent, relative to age 20. This peak occurred at ages 35–39, and total wage and salary income fell slightly each year thereafter. As work became more open-ended, the total growth in earnings to the peak increased substantially, rising to 50 percent by 1980, 90 percent by 2000, and almost 100 percent by 2017. Changes in the age at which wage income peaks also suggest that experience became more highly valued. In 2000, earnings peaked between the ages of 50 and 54, and by 2017, the peak occurred between the ages of 55 and 59.

The shift away from routine jobs explains about half of the shift in US age/earnings profiles from 1980 to 2017 and nearly all of the change since 2000. Using Burning Glass Technologies’ database of job vacancy announcements to classify jobs by decision intensity, Deming shows that earnings growth after age 35 is much greater in decision-intensive occupations such as management, engineering, and business operations, compared to less decision-intensive but still high-paying occupations such as sales representatives, healthcare practitioners, and financial specialists.

Earnings data from various waves of the National Longitudinal Survey of Youth show a congruent pattern, with no growth after age 40 for workers in 25th percentile decision-intensive jobs, and a 4 percentage point increase between the ages of 35 and 55 for each 10 percentile increase in occupation decision intensity. Decision-making, rather than general analytical skills, is the key predictor of life-cycle wage growth.

The earnings of high-ability workers in decision-intensive jobs diverge from those of other workers as they age. A one standard deviation increase in cognitive skills, as measured by Armed Forces Qualification Test scores, increases earnings between the ages of 24 and 27 by 5.3 percent, substantially less than the 8.2 percent increase at ages 56 to 59. The returns to cognitive ability are also greater in decision-intensive occupations. A 10 percentile increase in decision intensity increases earnings by 0.7 percent at ages 24–27 and 6.3 percent at ages 56–59.

The Growing Importance of Decision-Making on the Job