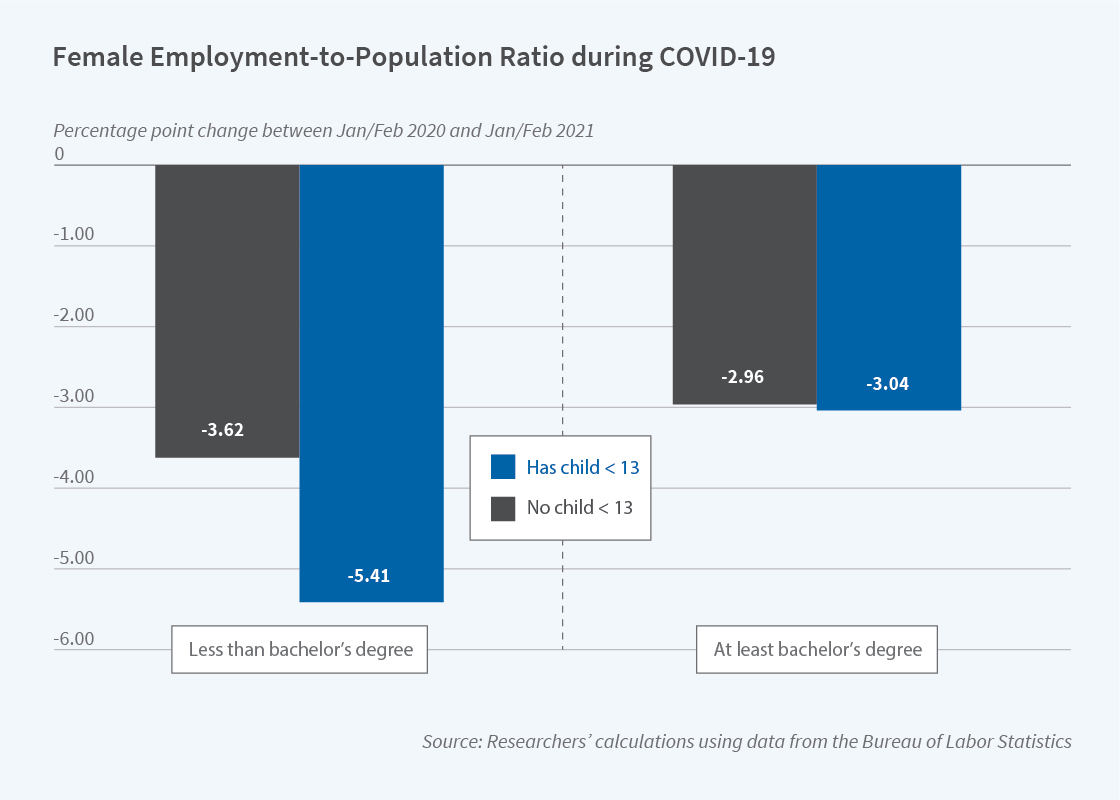 The employment rates of women of similar age and educational attainment have not systematically differed by whether or not they have young children.

In April 2021, the number of jobs in the US economy was about 8 million below the number in February 2020. As vaccinations spread and hard-hit sectors of the economy reopened, individuals who were not seeking employment appeared to play a major role in the low level of employment, since there were record numbers of job openings and the largest wage increases in decades.

Three leading hypotheses for this phenomenon are the possibility that school closings and an inadequate supply of childcare prevented parents, particularly mothers, with young children from returning to work, the fear among some workers that they would catch COVID-19 if they returned to the workplace, and reduced job search on account of more generous unemployment benefits.

In The Role of Childcare Challenges in the US Jobs Market Recovery during the COVID-19 Pandemic (NBER Working Paper 28934), Jason Furman, Melissa Schettini Kearney, and Wilson Powell find that disproportionate job loss among women with young children accounts for a negligible share of the aggregate employment deficit in early 2021.

There are several reasons that challenges specific to working parents explain only a small part of the sluggish job recovery, the researchers find. First, mothers with young children are a relatively small part of the workforce, about 12 percent, so even if they did experience excess job loss, that would account for only a small share of the total employment decline. Second, the employment declines of women with young children are similar to those of women without small children but of similar age and education. Third, fathers of young children comprise about 13 percent of the labor force, and they experienced less job loss than other men.

As a counterfactual exercise, the researchers used data from the Bureau of Labor Statistics on individuals aged 16 and up to calculate what aggregate employment would have been had parents with a child under 13 experienced the same percentage change in employment as adults in the same sex-age-education category without a child under 13. They found that the impact of the pandemic on parents with young children cannot explain the decline in aggregate employment rates.

Upper-bound estimates suggest that excess declines in employment among mothers of young children accounted for at most 1 percent of the total decline in employment and 3 percent of the total decline in labor force participation, measured in the first part of 2021. There were no systematic differences between individuals with young children in states that had below median rates of in-person schooling. Furthermore, in the recessions of 2001 and 2007–09, during which schools remained open, differential employment loss between parents of young children and others played a similarly small role in aggregate employment declines. While mothers of young children may have had to shoulder increased childcare and educational responsibilities for their children during the COVID-19 recession, they have not disproportionately stayed withdrawn from the workforce.

The researchers conclude that the ongoing employment deficit in 2021 can best be explained by factors that affect workers in general rather than on challenges specific to working parents.