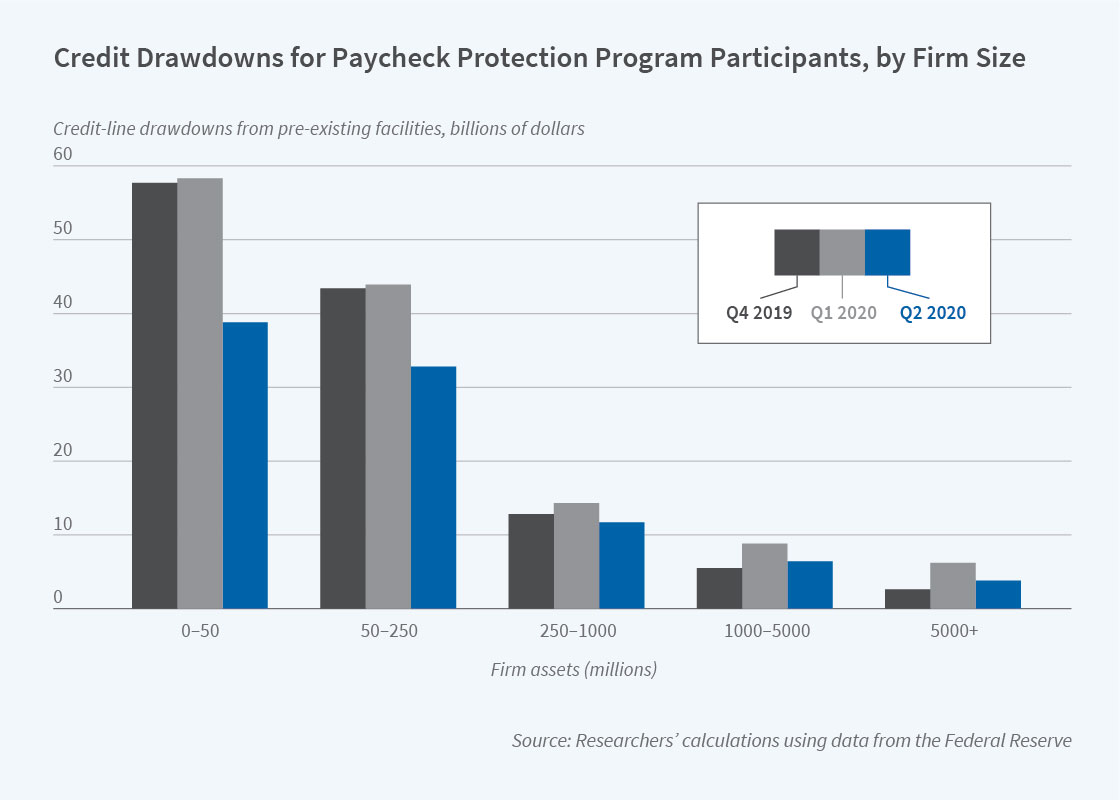 In 2019, less than 10 percent of small firms had unsecured revolving credit lines, while more than 80 percent of large firms did.

In Bank Liquidity Provision across the Firm Size Distribution (NBER Working Paper 27945), Gabriel Chodorow-Reich, Olivier Darmouni, Stephan Luck, and Matthew C. Plosser characterize how the nature of bank lending to businesses varies across firms of different sizes. They find that smaller firms have credit with much shorter maturities, frequently face expiring credit lines, are required to post more collateral on both credit lines and term loans, and yet pay more for the credit they get.

The researchers analyze supervisory loan-level data from the Federal Reserve. The data include all loans of more than $1 million made by 29 banks, each with more than $100 billion in consolidated assets, and cover $3.15 trillion in total corporate commitments to 103,468 unique firms, roughly two-thirds of total corporate loan commitments from all banks in the fourth quarter of 2019. Nearly all of the commitments were commercial, industrial, or real estate loans. The firms were divided into five asset size categories, including 46,081 firms classified as “small firms” that each had assets of less than $50 million and 1,886 firms classified as “large firms” that each had assets of more than $5 billion.

The researchers report that banks appear to exercise discretion over pre-committed credit to smaller enterprises by lending at short maturities and making frequent rollover decisions. At the end of 2019:Q4, only 15 percent of credit lines to the large firms had a maturity of less than one year, while 40 percent of the lines to the small firms matured or were callable in just one quarter. Small firms were required to provide more collateral to back their loans. Fewer than 5 percent of the credit lines to small firms were unsecured, compared with 70 percent for firms with assets over $5 billion.

Yet, small firms paid interest rates that averaged 100 basis points more than those paid by large firms. An 80 basis point differential persisted even after adding controls for firm financial condition, industry, lender rating, and leverage. The higher rates may reflect aspects of small borrowers that are not captured by observable characteristics, such as lender concerns about accurate reporting on financial statements and other kinds of “soft” information.

In normal times, small firms used more of their credit lines, one-third of which had utilization rates above 70 percent. The largest firms used less of their credit, with three-quarters having utilization rates below 10 percent. This was not the case during the first two quarters of 2020, when the COVID-19 pandemic placed extraordinary strains on corporate cash. While small firms did not change their credit usage in 2020:Q1, the largest firms increased it by 43 percent, with the largest increases at firms in hard-hit industries such as retail, the performing arts, and spectator sports.

In 2020:Q2, credit use by smaller firms contracted by $21.9 billion. Firms that received loans under the Paycheck Protection Program accounted for 79 percent of the credit decline. The researchers conclude that government lending programs can “substantially if not totally” overcome private credit constraints, but at a cost.