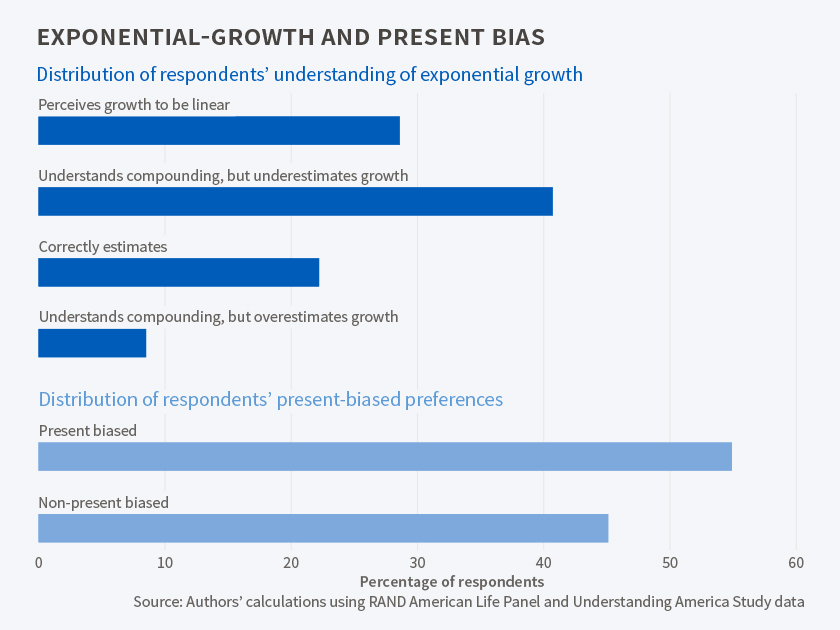 With the decline of traditional pension plans, employer-sponsored individual accounts such as 401(k) plans have become a major source of retirement income for millions of Americans. These plans typically require individuals to make decisions about participation, contributions, investment allocation, and withdrawals. As a result, individuals' abilities and attitudes towards saving are increasingly consequential for their retirement security.

In The Role of Time Preferences and Exponential-Growth Bias in Retirement Savings (NBER Working Paper No. 21482), researchers Gopi Shah Goda, Matthew Levy, Colleen Flaherty Manchester, Aaron Sojourner, and Joshua Tasoff explore two psychological tendencies that may lead people to save insufficiently for retirement. While standard economic theory suggests that savings decisions will depend on factors like the rate of return, the complexity of these decisions increases the likelihood that "behavioral" factors or biases will also play a role.

"Present bias" refers to the tendency, in evaluating a tradeoff between two future options, to give stronger weight to the earlier option as it gets closer. An individual with present-biased preferences might express willingness to invest a tax refund she will receive in six months in a retirement savings account, for example, but when the refund arrives she will prefer not to do so, even though nothing has changed except the passage of time. This individual will save less for retirement than another who also favors investing the tax refund (who has the same long-run "discount rate") but does not suffer from present bias and thus does not change her mind as the refund date nears.

"Exponential-growth bias" is a perceptual bias that relates to an individual's understanding of compound interest. An individual who neglects compounding will expect retirement account balances to grow linearly over time, while one who incorporates it will expect them to grow exponentially. The former individual may save less because he believes the expected return to saving to be less than it really is.

To estimate the prevalence of these two biases, the authors use data from two online surveys, the RAND American Life Panel and the Understanding America Study. To assess exponential-growth bias, participants are asked to calculate how much an investment of a certain amount would be worth after a specified period of time with a given interest rate. Individuals are allowed to use any approach or aids they like to answer the questions, and are paid more for giving more accurate answers, to mimic the environment and incentives they would face in making real-world decisions. To assess present bias, participants are asked about "present-future" and "future-future" tradeoffs (for example, would you prefer to receive $100 today or $120 in 12 months? $120 in 12 months or $144 in 24 months?).

The authors find that over half—55 percent—of respondents have present-biased preferences. They also find that less than one-quarter of respondents correctly perceive account balances to grow exponentially over time. Seven in ten respondents perceive the rate of return on saving to be less than it really is, with roughly 30 percent believing that balances grow linearly over time and 40 percent estimating a rate of return that falls between linear and exponential growth. Interesting, while both types of bias are common, the correlation between them is weak, suggesting that the biases are largely independent.

Next, the authors examine the relationship between these biases and retirement saving. They find that both biases are strongly related to retirement account balances, even after controlling for the effect of income, education, risk preference, financial literacy, IQ, and other characteristics. A two-standard-deviation increase in either measure of bias (equivalent to moving from a typical level of bias to the 95th percentile) would decrease retirement savings by about $26,000, or about 20 percent relative to the mean value of $133,000. The effect is smaller for those who are more aware of their bias, which could be the case if these individuals use commitment devices to counteract present bias or tools and expert help to address exponential-growth bias.

Overall, eliminating both biases from the sample would lead to a 12 percent increase in retirement savings, according to the authors' estimates. Turning to mechanisms, the authors find that these biases affect retirement savings by reducing flows into employer-sponsored retirement accounts. Conversely, the biases do not seem to affect enrollment or equity allocation.

In concluding, the authors note "while defaults and other alternatives have successfully increased average contributions in many contexts, and retirement income projections may move people towards better decisions when well-implemented, there is no evidence that these fully counteract the effects of exponential-growth bias and present bias on retirement saving decisions. More evidence regarding the ability of interventions to target biases related to retirement saving decisions is needed and remains an important direction for future research."

The authors acknowledge financial support by the TIAA-CREF Institute and the Pension Research Council/Boetter Center of the Wharton School at the University of Pennsylvania. This research was also supported by the U.S. Social Security Administration through grant #RRC08098400-07 to the NBER as part of the SSA Retirement Research Consortium. Additional support was provided by the National Institute on Aging through grant #R01AG020717 and the Social Security Administration for the UAS data collection.