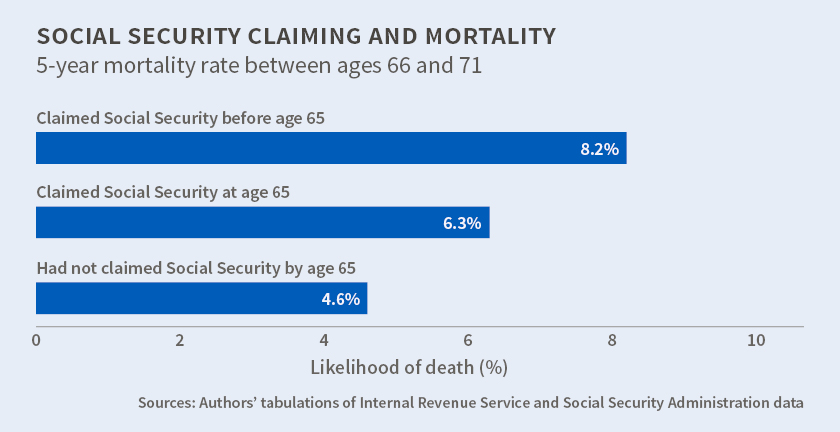 Many of those who choose early benefits have sufficient assets to delay. Early claimers have worse self-reported health, shorter life expectancy, and are more likely to die earlier.

Although full retirement age is 66, eligible Americans may choose to begin receiving Social Security retirement benefits at any time between age 62 and age 70. Even though benefits are reduced for those claiming before age 66, and increased for those who postpone claiming until age 70, roughly a third of beneficiaries claim benefits as soon as possible, at age 62.

The researchers find that individuals may be exploiting information about their own health; those who choose early benefits have worse self-reported health, think that their life expectancy will be shorter, and are more likely to die earlier than those who claim later. Individuals claiming Social Security benefits before they turn 65 had an 8.2 percent mortality rate in the five-year period between age 66 and age 71. Those who claimed benefits after age 65 had a 4.6 percent chance of dying during that period.

A similar analysis, using more-detailed data from the HRS to control for wealth, age, race, education, and gender, produced similar results. It suggested that those who claim Social Security before age 66 are 3.3 percent less likely to report being in good or excellent health and have a 2.07 percent lower probability of living to age 75. Even though the mortality differences between early claimers and late claimers are significant, they are not large enough on average to eliminate the gain from delayed claiming.