Internal civil conflict has been common during the past half century, a fact that until recently escaped the notice of most economists. 1 Civil wars -- internal conflicts with more than 1,000 battle deaths in a single year -- have afflicted one third of all nations. Adding in civil conflicts, which involve at least 25 battle deaths per year, increases the incidence figure to more than half. 2 And, internal warfare is not just extremely common, it is also persistent. Figure 1 presents the cumulative proportion of all nations experiencing wars and conflicts since 1960: 20 percent of nations have experienced at least ten years of civil war during the period. 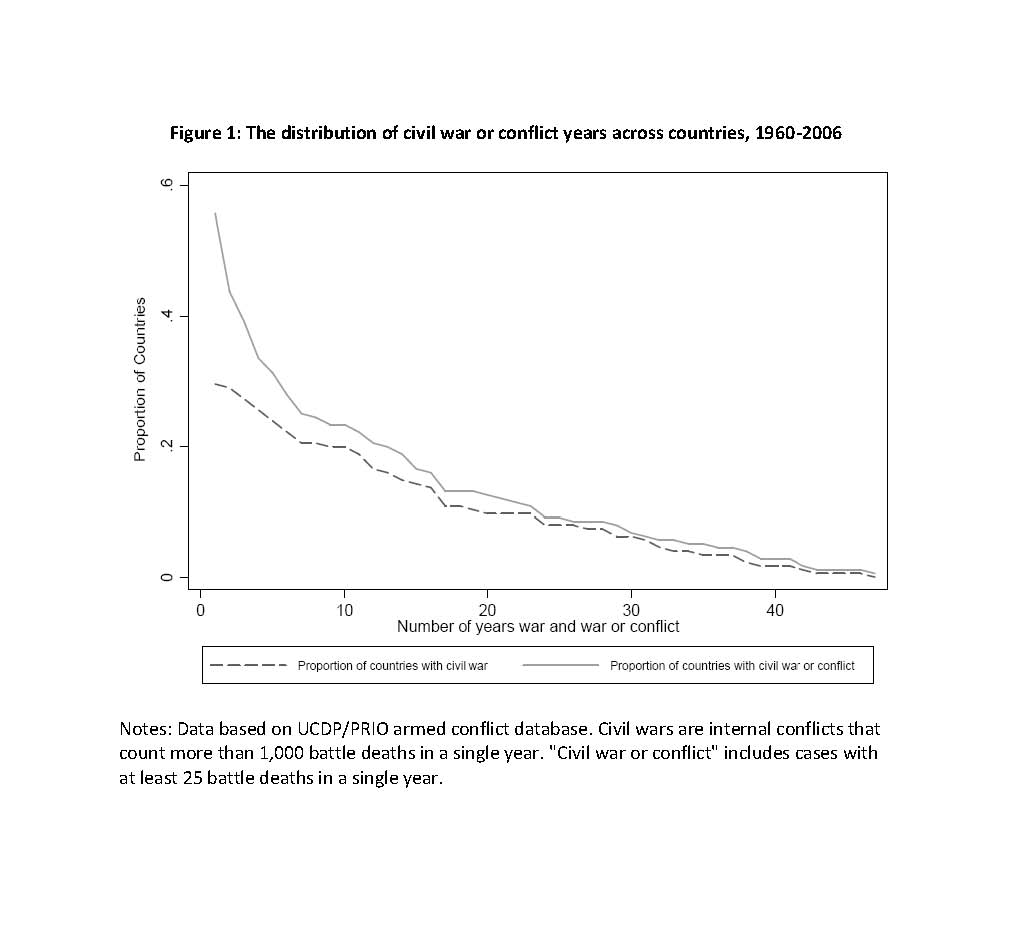 The proportion of countries embroiled in civil conflict at a single point in time also has increased steadily through the last half of the twentieth century, peaking at over 20 percent in the 1990s. In sub-Saharan Africa, the world's poorest region, nearly a third of countries experienced active civil wars or conflicts during the mid-1990s. But why is this so?

The outbreak of internal wars is commonly attributed to poverty. Indeed, the correlation between low per capita incomes and higher propensities for internal war is one of the most robust empirical relationships in the economic literature. Figure 2 illustrates the relationship between per capita income (percentiles) and civil war using a non-parametric Fan regression; the countries towards the bottom of the world's income distribution - many in Africa - have several times more wars than those in the top quartile, while the middle income countries still face considerable conflict risk. 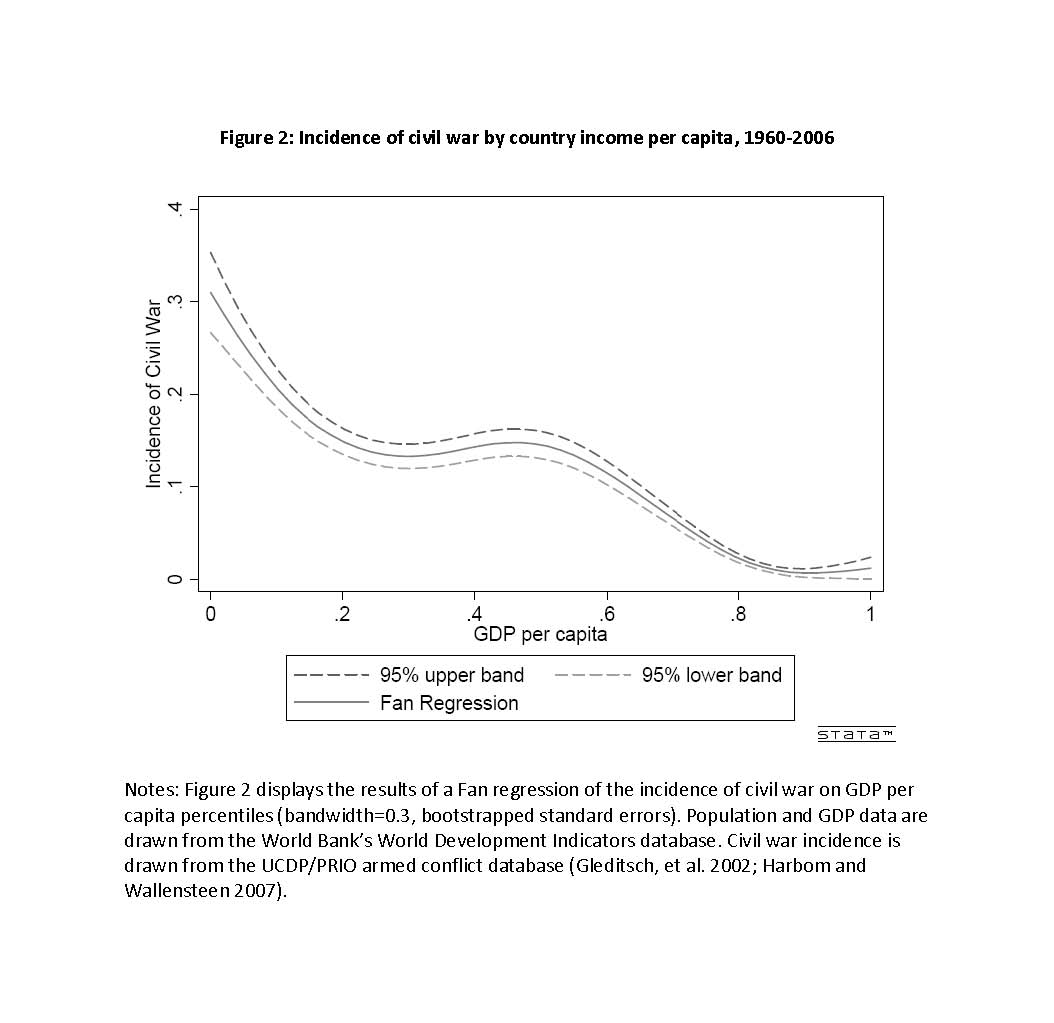 Still, we should be cautious about inferring a direct causal link from poverty to conflict because the reverse is also true: conflicts devastate life, health, and living standards. The Democratic Republic of Congo, where surveys suggest millions may have died as a result of the recent civil war, primarily due to hunger and disease, is a chilling example3 . Although the accuracy of mortality figures in such war zones is open to question, the estimated mortality figures for Rwanda, Angola, and Sudan are likewise shocking. Massive loss of life inevitably affects the economy. Warfare also destroys physical infra-structure and human capital, as well as possibly altering some social and political institutions. Moreover, internal wars are contagious; refugee flows, disease, lawlessness, and the illicit trades in drugs, arms, and minerals have generated "spillover" effects into the countries neighboring the conflict zones.

A seeming paradox, however, is that warfare is also sometimes credited for the technological and institutional development that underpins Western economic prosperity. Both internal and external wars are commonplace in European history. Several scholars have claimed that inter-state wars and wars of territorial conquest served a critical role in enabling the development of strong and capable government institutions in Europe and Asia4 .

Civil war is clearly central in the study of international economic development, yet leading development economists have often overlooked it, and some undergraduate textbooks do not even mention the issue. Over the past decade, however, many economists and other social scientists have worked to better understand the causes and the economic legacies of internal warfare, often in collaboration with political scientists and other scholars. The main goal of this research summary is to describe some of this progress, with a particular focus on the role of economic shocks, weather, and climate in driving the patterns laid out above.

Cross-country Evidence on the Causes of Armed Conflict

The correlation between civil conflict and low income levels and negative income shocks is clear, but the direction of causality remains contested. Even the use of lagged national income growth (as in earlier studies5 ) does not eliminate this concern, because the anticipation of future political instability and conflict can affect current investment behavior, and thus living standards. In other words, there are likely to be permanent fixed differences between countries that are correlated with their income levels, economic growth rates, and civil war.

To address this concern, several papers seek to isolate exogenous variation in income. In sub-Saharan Africa, where most households rely on rain-fed agriculture, falling rainfall and the existence of drought cause large reductions in income. Shanker Satyanath, Ernest Sergenti, and I 6 therefore use annual rainfall growth as an instrument for income growth. We find a statistically significant relationship in our sub-Saharan Africa sample, but it is weaker in other regions of the world, where much less economic activity relies on rain-fed agriculture. This makes Africa the natural region for the application of our approach. In our main statistical specification, we find that a 5 percent drop in income growth increases the likelihood of a civil conflict in the following year by up to 10 percentage points, or nearly one half. This effect is not substantially dampened in countries with stronger democratic institutions, greater ethno-linguistic fractionalization, or oil exporters.

Antonio Ciccone7 argues that "log rainfall" is a conceptually more appealing instrument than rainfall growth, but Satyanath and I8 show that the main relationship between economic growth and civil conflict is nearly unchanged with this alternative specification. These papers also demonstrate that the relationship between rainfall shocks and civil conflict appears to become weaker in Africa since roughly 2000. It is unclear why this is the case, but it may be related to Africa's unprecedented economic growth in non-agricultural sectors in the past decade, as well as to public policy changes perhaps stemming from spreading democratization9 .

This analysis highlights the role of income shocks in generating armed conflict in Africa. Unfortunately, this econometric strategy does not allow the authors to definitively pin down a unique causal mechanism: rainfall shocks may provoke conflict because they lower the opportunity cost of fighting among rural populations (those most affected by weather shocks), or because crop failure also reduces government revenues and state capacity, or both.

Recent research has emphasized the role that climate might play in driving future armed conflict. Solomon M. Hsiang, Kyle Meng, and Mark A Cane 10 show that armed conflict increases significantly in El Nino Southern Oscillation (ENSO) years in tropical regions, and that poor countries are the most prone to increased violence. Their estimates imply that ENSO may have played a role in 21 percent of all civil conflicts since 1950.

How might future climate change heighten or dampen the risk of armed conflict in sub-Saharan Africa, the world's poorest and most violence-prone region? Marshall Burke, John Dykema, David Lobell, Satyanath, and I11 combine historical estimates of the weather-conflict relationship with a wide range of leading global climate model projections and conclude that future climate change is likely to increase conflict risk in Africa by 54 percent. The expected rise in future temperatures serves as the key driver of this relationship. These relationships remain speculative by necessity, given the inherent uncertainty about future global political, economic, and emissions trends, but this exercise serves as a useful benchmark for the risk that climate change poses for political stability in Africa.

Building on the approach taken in that paper, our related research explores the impact of incorporating climate uncertainty into estimates of how climate change will affect agriculture in the United States and sub-Saharan Africa.12 A growing body of research projects the effects of global climate change on economic outcomes, but climate scientists often criticize these articles because nearly all of them ignore the well-established uncertainty in future temperature and rainfall changes. Therefore, they are likely to have downward biased standard errors and potentially misleading point estimates. Our paper finds that accounting for climate uncertainty leads to a much wider range of projected effects on agricultural profits, with the 95 percent confidence interval featuring drops of between 17 percent and 88 percent. An application to African agriculture yields similar results.

A number of researchers of cross-country conflict have called for more disaggregated analyses, which allow for more sophisticated econometric methods and for data that is closer to the phenomena being studied. This change is already underway. An emerging literature finds strong links between adverse economic shocks and political violence in a wide range of settings, including as a significant cause of land invasions in Brazil, more intense armed conflict in Colombia, increased rebel recruitment in Burundi, and the outbreak of Hindu-Muslim communal riots in India.13 Taking the cross-country research together with this emerging literature, there is a growing body of evidence that adverse economic shocks contribute to political violence in less developed countries, with potentially severe welfare consequences for the world's poor.

Related papers focus on understanding how best to help post-conflict societies emerge from poverty. One example is my recent work with Katherine Casey and Rachel Glennerster that uses a randomized experimental methodology to evaluate the impact of a local institutional reform on public goods outcomes in post-war Sierra Leone.14

While deriving policy implications is not the main goal of this summary, the literature does have certain implications. For example, the empirical relationship between violence and low and falling incomes suggests that implementing insurance schemes to protect poor societies from negative income shocks might reduce future rounds of bloodshed. One possibility is expanded regional drought insurance for farmers. Another is foreign aid contingent on objective conflict risk indicators (for example, weather or commodity price shocks, or a coming El Nino year) - what I have elsewhere called "rapid conflict prevention support" 15 - to bolster local economic conditions when the risk of particularly political violence is high.

Edward (Ted) Miguel is a Research Associate in the NBER's Programs on Political Economy and Education. He is also a professor of economics and director of the Center of Evaluation for Global Action at the University of California, Berkeley, where he has taught since 2000.

Born in New York City and raised in New Jersey, he earned S.B. degrees in both Economics and Mathematics from MIT and received a Ph.D. in Economics from Harvard University, where he was a National Science Foundation Fellow. His main research focus is African economic development, including work on the economic causes and consequences of violence; the impact of ethnic divisions on local collective action; and interactions between health, education, and productivity for the poor. He has conducted field work in Kenya, Sierra Leone, Tanzania, and India.

Miguel and NBER Research Associate Ray Fisman are co-authors of Economic Gangsters: Corruption, Violence and the Poverty of Nations (Princeton University Press, 2008). He is also an Associate Editor of the Quarterly Journal of Economics, Journal of Development Economics, and Review of Economics and Statistics, the recipient of the 2005 Alfred P. Sloan Fellowship, and winner of the 2005 Kenneth J. Arrow Prize awarded annually by the International Health Economics Association for the Best Paper in Health Economics.

Law and Economics
Environment
Other History