Members of older households face the prospect of living longer than expected and incurring large medical expenses. My research on old age aims at better quantifying these risks, studying their implications for savings, consumption, and welfare, and evaluating the extent to which current government programs insure older people.

The first part of my research on these topics focuses on elderly singles, who comprise about 50 percent of people aged 70 or older. The second part extends the analysis to include elderly couples. The third focuses on the effect of health risk on older households’ resources and the utility that they derive from consumption in various states of health, considering both couples and singles.

Risk, Savings, and Insurance among Singles

Eric French, John Bailey Jones, and I study the population of retired single people.1 We use high-quality data from the Health and Retirement Study (HRS) to construct a rich model of out-of-pocket medical spending and use an estimated structural model to assess its importance for retirement savings. We uncover several novel findings.

Second, older people with high permanent income hold more wealth and spend it more slowly. Figure 2 displays the median assets of surviving individuals, conditional on birth cohort and permanent-income quintile. It shows that singles with high permanent income (set of top lines) hold significant amounts of wealth well into their 90s, that those with the lowest permanent income never save much (bottom lines, often flush against the horizontal axis), and that those in the middle draw down their assets at a moderate rate (intermediate set of lines). Thus, even at older ages, richer people save more, a finding first documented by Karen Dynan, Jonathan Skinner, and Stephen Zeldes for the whole life cycle.2

These differences in mortality are important not only to understand older individuals’ saving behavior, but to properly measure savings themselves. Because male, unhealthy, low-income people die younger, at older ages our sample is increasingly composed of women, people with high lifetime earnings, and those who had good health at younger ages. Failing to account for this mortality bias would lead us to understate asset draw-down by over 50 percent. To account for this, we explicitly model mortality bias in our structural model, where people who are rich, healthy, and female have higher rates of survival.

We also use our structural model to show that the government-provided consumption floor — mainly Supplemental Security Income (SSI) and Medicaid — affects saving decisions at all levels of income. This is not surprising, given the size of our estimated medical needs for the old and income-rich; even wealthy households can be financially decimated by medical needs in very old age.

In subsequent work, French, Jones, and I focus on the role of Medicaid in insuring against old-age risks and determining savings.4 Although Medicare assists the great majority of people over 65, its beneficiaries are still responsible for insurance premia and copays. Furthermore, Medicare does not cover extended nursing home stays. These expenses are covered out of pocket or, for those with low income and assets or those made financially destitute by catastrophic medical spending, by Medicaid.

We then develop and estimate a life-cycle model of consumption and medical spending. Individuals face uncertainty about their health, life span, and medical needs, including nursing home stays. The model accounts for Medicare, SSI, and Medicaid. Consistent with program rules, we model two pathways to Medicaid: one for the lifelong poor and one for people impoverished by large medical expenses.

The model shows that the current Medicaid system provides different kinds of insurance to households with different resources. Households in the lower permanent-income quintiles are much more likely to receive Medicaid transfers, but the transfers that they receive are on average relatively small. Households in the higher permanent-income quintiles are much less likely to receive any Medicaid transfers, but when they do, these transfers are large and correspond to severe and expensive medical conditions. Medicaid is thus effective for the poorest, but also offers valuable insurance to the rich against catastrophic medical conditions, which are the most difficult to insure through saving and in the private market.

Our estimates imply that with moderate risk aversion and realistic lifetime and medical needs risk, the value that most retirees place on Medicaid insurance exceeds the actuarial value of their expected payments. On the other hand, we find that a Medicaid expansion would be valued by most retirees at less than its cost. These comparisons suggest that there would be limited demand for expanding the current Medicaid program.

Our previous work has focused on elderly singles. Much less is known about the reasons couples save. Is it to make sure that the surviving spouse can live comfortably after one dies? To leave bequests to heirs other than the surviving spouse? To pay for future medical expenses? And how do these saving motives interact?

Rory McGee, Rachel Rodgers, French, Jones, and I collect evidence on these issues by documenting how assets change when a household member dies.5 Using a matching estimator, we find that when the last person in a household dies, his or her assets fall, relative to survivors, by about $20,000. When one member of a couple dies, household assets fall, relative to intact couples, by around $90,000. End-of-life expenses, mostly medical, are sufficient to explain the asset declines measured for singles, but fall short of explaining the declines observed for couples. Bequests from dying spouses to non-spousal heirs such as children are more than sufficient to explain the remainder.

In ongoing work, French, Jones, McGee, and I extend our modeling of old age risks and saving behavior to include couples.6 We use HRS data to document that the savings of singles stay roughly constant or fall during retirement, but the savings of couples stay constant or increase until one of the spouses dies. In addition, we find that savings drop sharply leading up to the death of each spouse and, by the time the second spouse dies, a large fraction of the wealth of the couple has vanished. These facts are consistent with the findings of James Poterba, Steven Venti, and David Wise.7

We then develop and estimate a structural model in which people face longevity, health, and medical expense risks, and potentially care about their surviving spouse and other heirs. Our results for singles reinforce earlier findings: most singles mainly save to self-insure against future medical expenses.

Second, the desire to leave bequests to heirs other than one’s spouse has large effects on the savings of couples with high permanent income but almost no effects on the savings of couples at the low and middle permanent-income levels. At age 94, couples in the highest permanent-income tercile would hold 20 percent fewer assets if they did not have a bequest motive toward non-spousal heirs.

Importantly, my previously discussed research either assumes that health has no effect on the utility that one derives from non-medical consumption or fails to identify its effect. Richard Blundell, Margherita Borella, Jeanne Commault, and I use the HRS and the Consumption and Activities Mail Survey to study whether, in old age, consumption fluctuates because of shocks to available resources, or because health shocks affect the marginal utility that a household derives from consumption.8 The effects of health on available resources have also been studied by Edward Morrison, Arpit Gupta, Lenora Olson, Lawrence Cook, and Heather Keenan; by Poterba, Venti, and Wise; and by Carlos Dobkin, Amy Finkelstein, Raymond Kluender, and Matthew Notowidigdo.9

Second, most of the effect of temporary changes in health comes from the change in marginal utility from consumption. More specifically, a temporary health shock that reduces the health index by one standard deviation reduces nondurable consumption by 2.8 percent.  About 0.3 percent of this decline is the result of the change in resources, while the rest is the result of a health-induced shift in the marginal utility generated by consumption.

Our findings inform the extent to which existing government programs help insure against the large risks that households face during old age, as well as the reasons households save. They therefore illustrate how policy reforms would affect both their savings and their welfare. 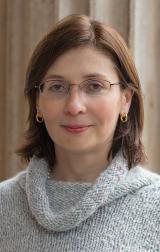 She is an editor at the Review of Economic Dynamics. She serves on the Carnegie-Rochester-New-York-University Public Policy Conference Advisory Board, on the American Economic Journal: Economic Policy editorial board, and on the Journal of Economic Literature board of editors. She also co-organizes the HELP! (HEaLth and Pandemics) Econ Working Group.

Her research focuses on savings, inequality, human capital, health and medical expenses, the role of household and government insurance, and entrepreneurship.