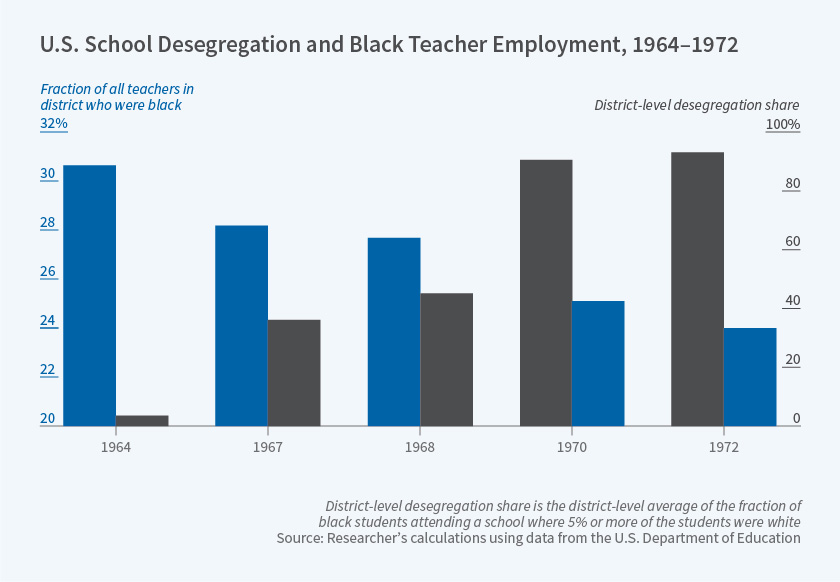 School boards’ efforts to make sure white students had white teachers appear to explain a sharp decline in the number of black teachers in the Deep South.

In 1970, more than 90 percent of African American students in the 11 states of the former Confederacy attended integrated schools, compared with fewer than 5 percent in 1964. But as the student bodies became more diverse, the percentage of black faculty  declined.

In School Desegregation and Black Teacher Employment (NBER Working Paper No. 25990), Owen Thompson estimates that the share of black teachers employed in Deep South schools fell by 31.8 percent between 1964 and 1972, compared with the likely trajectory of teacher employment in the absence of desegregation. The share of black teachers in the 781 sampled Southern districts fell from 30.6 percent in 1964 to 24.2 percent in 1972.

That decline was a significant blow to the black middle class in the South, where black schools traditionally had been staffed by black teachers. In 1960, 45 percent of Southern blacks with post-secondary educations reported teaching as their occupation.

While the Supreme Court ruled school segregation unconstitutional in 1954 in Brown v. Board of Education, it wasn’t until after the 1964 Civil Rights Act that federal enforcement of the court’s ruling became widespread. Empowered to withhold federal aid from segregated districts, the U.S. Department of Health, Education, and Welfare provided much of the enforcement muscle for integration.

Despite the Civil Rights and Voting Rights Acts, Southern school boards remained overwhelming white. Citing data from the census and educational archives, Thompson argues that these school leaders appeared intent on making sure white students had white teachers. The reduction in the number of black teachers was correlated with a district’s composition of students: Districts with the lowest percentage of black students saw the highest percentage reduction in black teachers.

As districts consolidated schools, they disproportionately dismissed African American teachers. If white teachers had been dismissed at the same rate as black teachers, overall teacher employment would have fallen by 10 percent from 1964 to 1972; in fact, it fell by 4.7 percent.

Some black teachers lost their jobs as districts stepped up recruitment of white teachers, who in many cases were less experienced than the people they replaced. The average Southern white teacher in 1970 was 2.7 years younger, 2.8 percentage points more likely to be male, and 5.8 percentage points more likely to have been born outside the South than that teacher’s counterpart in 1960.

Thompson estimates that among the blacks who would have held teaching jobs in the absence of desegregation, half instead went into less-skilled fields and the remainder took jobs in schools outside the South.