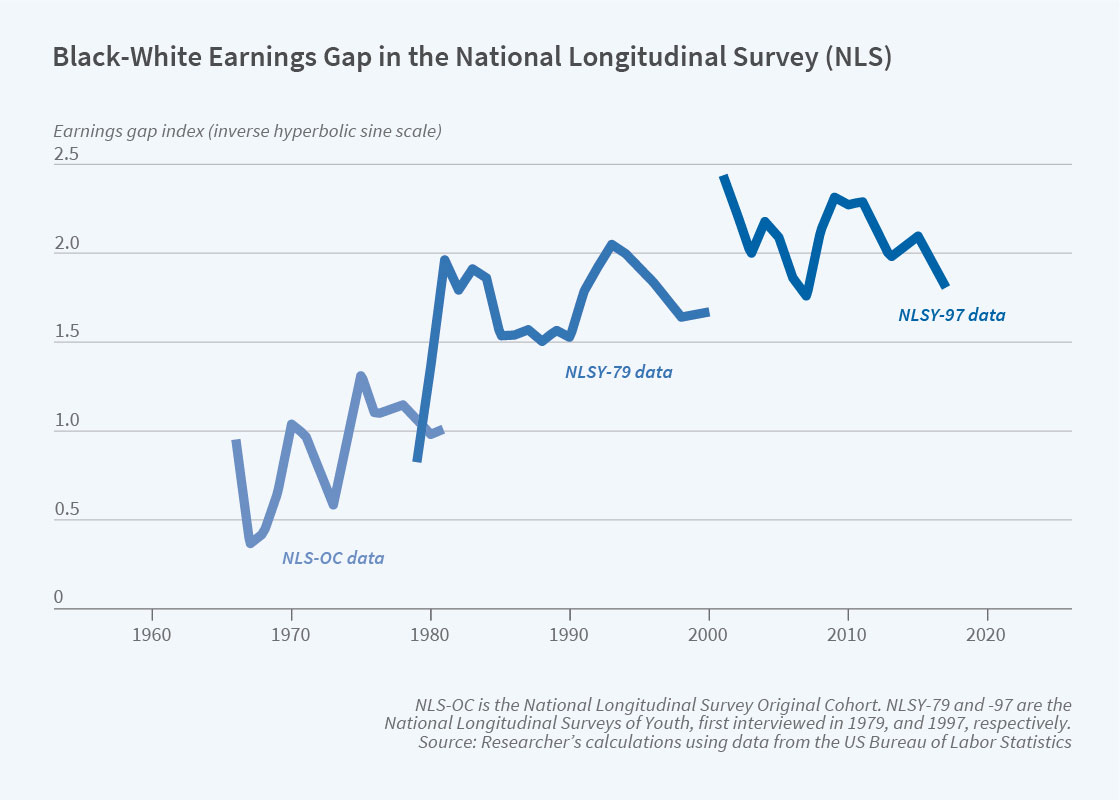 Rising labor market returns to education and a stable disparity in educational attainment led to a doubling in the share of the earnings gap between Black and White men that is attributable to the education gap.

The return to education in the US labor market has increased in recent decades, raising the importance of disparities in educational attainment between Black and White men in accounting for the earnings gap between these two groups.

In Human Capital and Black-White Earnings Gaps, 1966–2017 (NBER Working Paper 28586), Owen Thompson compares earnings outcomes for men born between 1941 and 1952, between 1957 and 1964, and between 1980 and 1984. The youngest member of the last cohort would be 34 in 2021. These cohorts correspond to three waves of the National Longitudinal Survey of Youth. He examines each cohort’s earnings outcomes between the ages of 21 and 37, excluding years when respondents reported they were in school.

Earnings are defined as the total of all income from wages, salaries, and farm and business income for the previous calendar year. The average earnings of Black men in the first cohort, $30,973 in 2017 dollars, were 64 percent of the $48,489 average for White men. The gap widened in the second cohort, when Black men’s earnings averaged 57 percent of Whites’, then declined slightly in the most recent cohort, when Black men’s earnings were 61 percent of White men’s. Average earnings trended down for both groups, and were $23,949 for Blacks and $39,415 for Whites in the latest cohort. The study considers how racial disparities in educational attainment contribute to these gaps.

The share of the racial earnings gap that can be accounted for by educational differences is 10 percent for the first cohort, 15 percent for the second, and 30 percent for the third cohort. This pattern is primarily the result of growing differences between the earnings of those with high and low levels of education, not to a widening of the racial disparity in educational attainment. In the first birth cohort, the average White man had 1.01 more years of schooling than the average Black man. That difference narrowed to 0.83 years in the second cohort, before widening again to 1.12 in the third cohort. Thompson finds that the “increasing explanatory power of human capital was overwhelmingly due to growth in the returns to human capital, rather than changes in racial gaps in formal schooling or test scores.”

The study concludes that “in the contemporary US labor market, rather than working in a low-wage job, less-skilled Black men are now frequently incarcerated, unemployed, or have withdrawn from the labor force during their prime working years.” The growing correlation between these zero-earnings outcomes and educational attainment is the essence of the growing explanatory power of schooling disparities.