Is the Phillips Curve Still a Useful Guide for Policymakers? 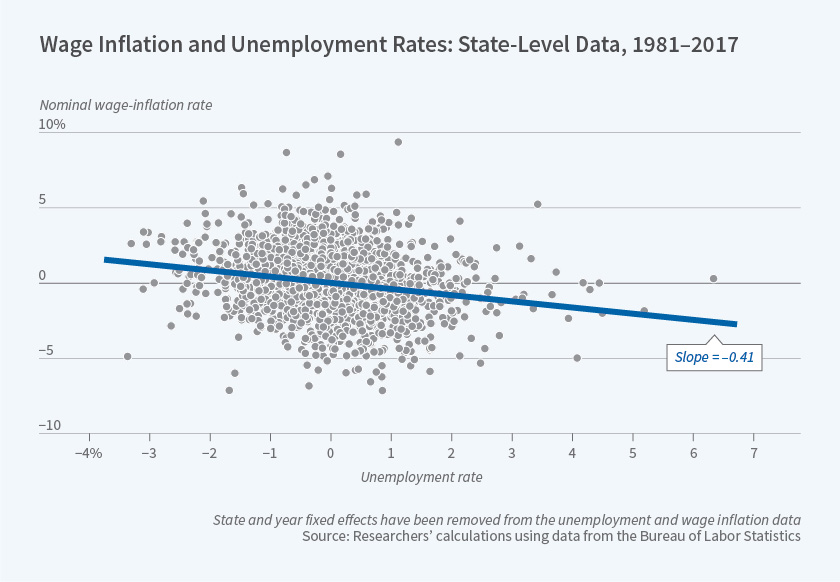 Cross-state analysis of data on wages, prices, and the unemployment rate suggests that a tight labor market is associated with higher inflation.

The Phillips curve, named for the New Zealand economist A.W. Phillips, who reported in the late 1950s that wages rose more rapidly when the unemployment rate was low, posits a trade-off between inflation and unemployment. When unemployment is low, and the labor market is tight, there is greater upward pressure on wages and, through labor costs, on prices.

The conceptual foundations of this relationship have been a subject of active debate, but for many decades, the relationship seemed well-supported by U.S. data. In the last two decades, however, the U.S.  inflation rate has not been particularly high, even during periods of low unemployment. The recent data have led many to wonder whether the Phillips curve has weakened or disappeared. In Prospects for Inflation in a High Pressure Economy: Is the Phillips Curve Dead or Is It Just Hibernating? (NBER Working Paper No. 25792) Peter Hooper, Frederic S. Mishkin, and Amir Sufi examine why the Phillips curve relationship has not been evident in recent aggregate data for the United States.

When examining data only from 1988 to 2018, the researchers see less evidence for a robust price Phillips curve. The linear and non-linear slopes are both close to zero, consistent with the common view that the Phillips curve is flattening. However, the wage Phillips curve is much more resilient and is still quite evident in this time period.

The study points out that in the last three decades, the Great Recession notwithstanding, there has been less variability in the national economy than in prior decades, which makes it harder to detect the impact of unemployment on inflation. In addition, the Federal Reserve has tried to avoid labor market overheating as a way to stabilize inflation, thereby “anchoring” inflation expectations at a 2 percent inflation level and reducing the effect of unemployment fluctuations on price movements.

The researchers observe that state- and city-level data provide more variability in unemployment rates and are less influenced by federal monetary policy than the national figures. Therefore, they explore the relationship between unemployment and inflation at this level. They find a strong negative relationship between the unemployment rate’s deviation from the state average and the rate of wage inflation. They also find evidence of a nonlinear price Phillips curve in city-level data.

The researchers point out that the relationship between inflation and the unemployment rate is a key input to the design of monetary policy. They note that the unemployment rate in the U.S. economy is currently near record lows, and they caution that they cannot predict whether inflation will rise in the coming years. However, they conclude that “Evidence that the price Phillips curve has been dormant for the past several decades does not necessarily mean that it is dead… it could be hibernating, and there is a risk of the Phillips curve waking up, with inflationary pressures rising in the face of an overheating labor market.”

Prospects for Inflation in a High Pressure Economy: Is the Phillips Curve Dead or is It Just Hibernating?