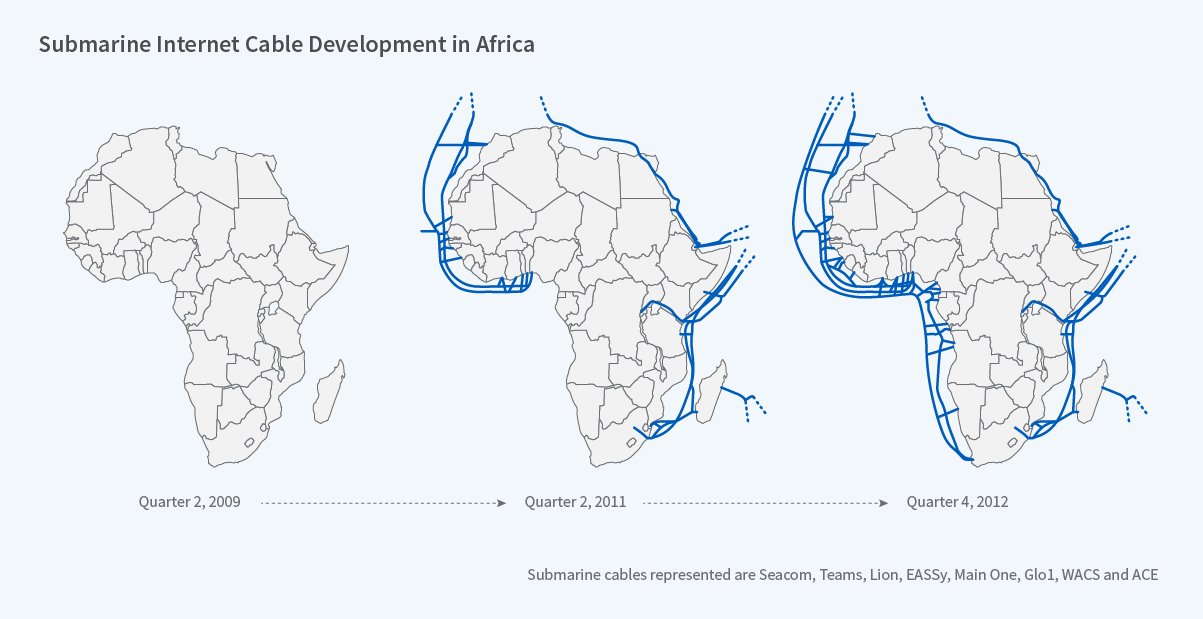 The slow pace of economic progress among the poor in Africa and other less-developed regions of the world has perplexed many economists. In The Arrival of Fast Internet and Employment in Africa (NBER Working Paper No. 23582), Jonas Hjort and Jonas Poulsen find that the absence of key technologies may play a role. They demonstrate this by studying the recent introduction of high-speed, high-capacity internet service from other continents to Africa. They find that when submarine cables reach a particular destination, there is a large positive effect on employment, specifically an increase in employment in higher-skill occupations. The arrival of high-speed internet also is associated with higher firm entry, productivity, exports, and other economic benefits that boost income and wealth.

The study examines the employment impact of 10 submarine cables that arrived on the coast of Africa between the closing years of the last decade and the early years of this one, connecting areas near the terrestrial network to fast internet in 12 African nations with a combined population of a half-billion people. Using data from the Afrobarometer, Demographic and Health Surveys, and various country-specific datasets, the researchers tracked economic and employment activity before and after the introduction of high-speed internet service in connected and unconnected areas.

The researchers find a major positive impact on employment in the connected areas. Because they use different datasets for different nations, they obtain a range of estimates. Using one dataset that covers eight countries — Benin, the Democratic Republic of the Congo, Ghana, Kenya, Namibia, Nigeria, Togo, and Tanzania — they find a 3.1 percentage point, or 4.4 percent, average increase in the probability that an individual is employed when fast internet arrives. Using a different dataset, covering nine countries — Benin, Ghana, Kenya, Madagascar, Mozambique, Nigeria, Senegal, Tanzania, and South Africa — they estimate an even larger 5.8 percentage point, or 10 percent, average increase in the employment rate. Based on data from before and after the introduction of fast internet, they conclude that the improved employment outlook was not simply a result of job displacement toward terrestrial backbone networks that started where the submarine cables came ashore.

The researchers find that the probability of being employed in a skilled occupation increased after the arrival of fast internet, while the probability of holding an unskilled job decreased. Access to fast internet appears to shift employment out of low-productivity occupations, such as small-scale farming, into higher productivity jobs, such as professional, clerical, and service jobs within a number of sectors, including retail and even finance and manufacturing. "The observed changes in average speeds and use of the internet after the arrival of the submarine cables suggest that new and new types of jobs may have been created," the researchers conclude.

The net result is improved economic performance, with internet infrastructure enabling firms and individuals to communicate among themselves and with potential overseas customers. Average incomes and wealth rose, and job inequality declined, after the arrival of this new communications technology.

The Arrival of Fast Internet and Employment in Africa