Why Are There So Few Public Companies in the U.S.? 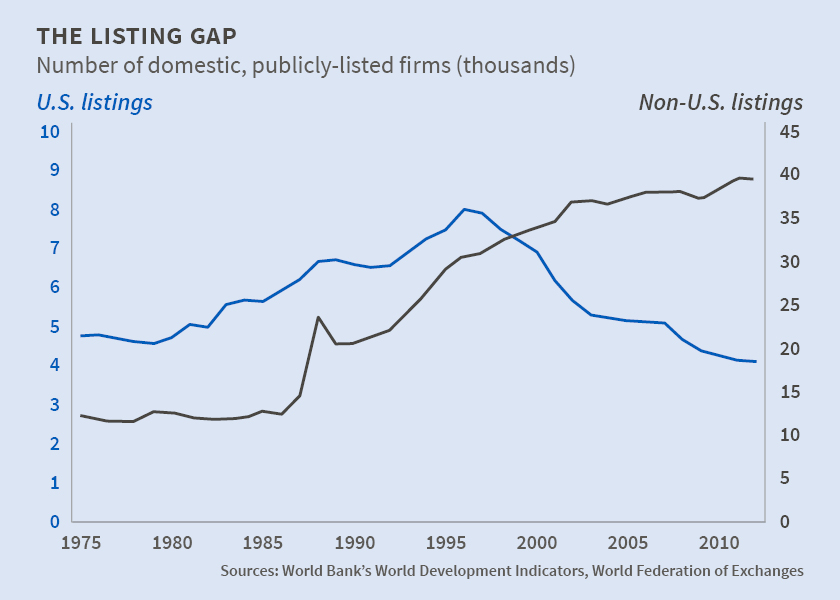 One of the most important choices a firm must make is whether or not to sell shares to the public. This choice is influenced by many factors, including prevailing economic conditions, government regulations, firm characteristics, and listing requirements on the major stock exchanges. However, many aspects of this choice remain unknown. In The U.S. Listing Gap (NBER Working Paper No. 21181), Craig Doidge, G. Andrew Karolyi, and René M. Stulz investigate firms' decisions to list and delist on public exchanges.

The researchers examine the puzzling recent tendency for U.S. firms to avoid or withdraw from public status. Every year between 1996 and 2012 saw a decrease in the number of exchange-listed firms. The total number fell from 8,000 to 4,100 over this period, while the rest of the world saw an increase from 30,700 to 39,400. The authors dub the result the "U.S. listing gap" and seek to explain it. They show that the gap exists relative to previous trends in the U.S. as well as current trends in other countries with similar investor protection, economic growth, and wealth. Roughly half of the gap is due to an unusually small number of new lists; the other half is attributable to an unusually large number of delists.

The authors consider and reject a number of potential explanations for this pattern. It is not the case that the total number of U.S. firms (public or private) is falling; it is rising. Further, the gap cannot be explained as a consequence of the Sarbanes-Oxley Act or other regulations enacted in the early 2000s, as the trend was already well underway by that time. The authors also rule out changes in firm size and industry composition as explanations. The percentage of listed firms fell in all size groups and in 48 out of 49 industry classifications. The gap does not appear to be the result of changes in NASDAQ listing requirements in 1996, although there is a break in the relationship between the number of new startup firms and the number of new listings around that time. Absent this break, the authors calculate there would have been 9,000 more new lists in 1996�2012.

One factor that may explain the decline in listings is the unusually large number of mergers occurring in the U.S. after 1996. The authors estimate that had the U.S. maintained its historical merger rate, it would have retained 45 percent of the listings that disappeared after 1996. It remains a puzzle, though, why the merger rate increased in the U.S. during this period.

The authors note that it is not clear whether the listing gap is a reason for worry. While many research studies use the size of a nation's stock market as a proxy for financial sophistication, and find that this measure is correlated with economic growth, it is possible that private firms are replacing public firms in the U.S. because they are more efficient. This possibility would suggest the U.S. is entering an entirely new phase of development in which a shrinking stock market may indicate increased prospects for growth.