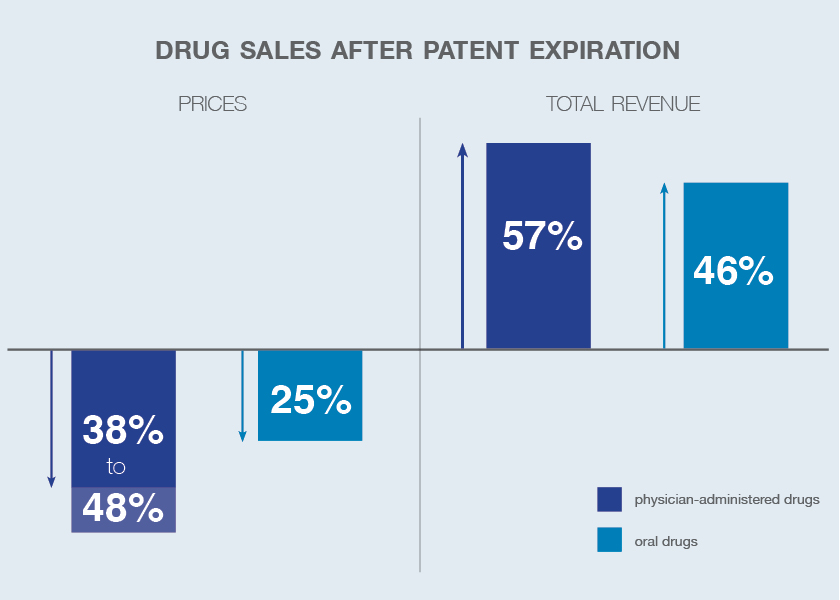 The average price of physician-administered drugs declined by between 38 and 48 percent following patent expiration.

When a drug's U.S. patent expires, manufacturers other than the initial developer may take advantage of an abbreviated approval process to introduce lower-priced generic versions. In most uses, generics are clinically equivalent to the original branded drug. Some drugs are straightforward to imitate and produce at low cost. Others, particularly those requiring sterile manufacturing conditions or similarly complex production processes, are much more costly to copy.

In Specialty Drug Prices and Utilization after Loss of U.S. Patent Exclusivity, 2001-2007 (NBER Working Paper No. 20016), Rena Conti and Ernst Berndt use information from the IMS Health National Sales Perspectives database to study how generic introductions affected the pricing, sales, and use of the 41 cancer-related specialty drugs that lost patent protection between 2001 and 2007.

The authors find clear evidence that competitors entered the market and prices fell after patent expiration. Typically, between three and five manufacturers applied to produce generic versions of complex-to-manufacture physician-administered drugs. There were more applicants, 6.3 on average, for oral drugs. Average drug prices dropped after expiration. The average price of physician-administered drugs declined by between 38 and 48 percent following patent expiration. The decline was more modest, about 25 percent, for oral drugs. For these drugs after generic entry, high and increasing brand prices partly offset low and decreasing generic prices. Sales volume appears to increase substantially following generic entry, consistent with the usual assumptions regarding the negative relationship between prices and quantity demanded. As a result, total revenue from sales of both categories of drugs increased after patent expiration. For physician-administered drugs, the average increase in total revenue was 57 percent, while for oral drugs the increase was 46 percent.