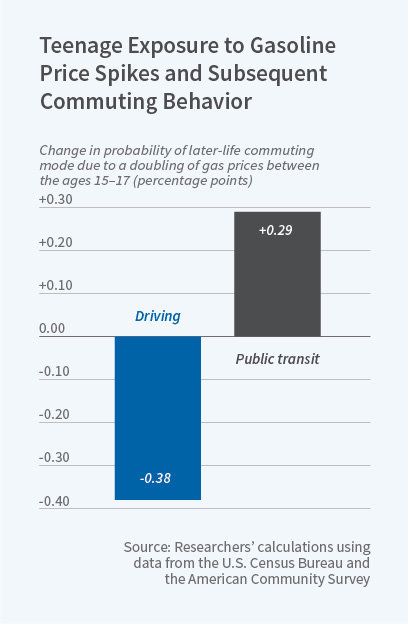 Americans who came of driving age during the rapid gas price increases and long waiting lines of 1980–81 were driving less than older and younger peers two decades later.

Individuals who were in their mid-30s at the time of the 2000 US decennial census are less likely to drive to work and more likely to commute by mass transit than their peers in younger and older age groups.

One explanation is that this cohort came of driving age between 1980 and 1981, as the nation was reeling from the oil shock triggered by the success of Iran’s Islamic revolution in 1979. As these 15- to 17-year-olds were getting their driver’s licenses, they saw gasoline prices double in a year and experienced long lines at the pumps.

In Formative Experiences and the Price of Gasoline (NBER Working Paper 26091), Christopher Severen and Arthur van Benthem show that these drivers were 0.3 to 0.5 percentage points less likely to drive to work later in life and 0.2 to 0.3 percentage points more likely to take mass transit in 2000 than those who started driving in less volatile times. The disparity was by far the most pronounced among those in the affected cohort living in urban areas with transit alternatives. In cities, people aged 36 and younger were 0.6 to 1.9 percentage points less likely than those 37 or older to drive to work.

These findings suggest that a consumer’s initial encounter with a product — even a mundane product like gasoline — can have a long-lasting impact on behavior. Such initial encounters help explain what later appears to be heterogeneity in preferences.

Since the 1970s, gasoline prices have trended higher, with intermittent dips. The researchers combine data covering nearly 40 years of driving behavior with state gasoline prices to establish that this effect is not specific to the 1979 oil crisis. They find that individuals respond to price changes during their formative driving years much more than to price levels.

Not only do adults whose formative driving years see a doubling in gas prices reduce driving to work by 0.3 to 0.4 percentage points later in life, they also drive 3.4 to 8.2 percent fewer miles (conditional on having access to a vehicle). This amounts to an average annual reduction of 900 to 1,100 miles. They are also somewhat less likely to own fuel-inefficient light-duty trucks than other age groups.

The researchers draw on decennial census data, which include questions about commuting mode and time, as well as the more frequent American Community Survey and the National Household Travel Survey. Their most recent data are from 2017.

The effects are concentrated on those who experience a jolt in gas prices between the ages of 15 and 18, without an effect on those younger or older. “The lack of an effect of gasoline price shocks after this formative window suggests initial contact may be more important than the cumulative experience for some behaviors,” the researchers write. These effects persist throughout prime age working years, and are strongest between the ages of 25 to 34 and 44 to 54.

The difference in driving patterns between drivers who experienced these gas price shocks and those who did not cannot be explained by such factors as income, educational levels, or marital status, the researchers report. Nor can it be attributed to putting off getting driver’s licenses or not obtaining them at all. This suggests formative experiences imprint later behavior.

Formative Experiences and the Price of Gasoline