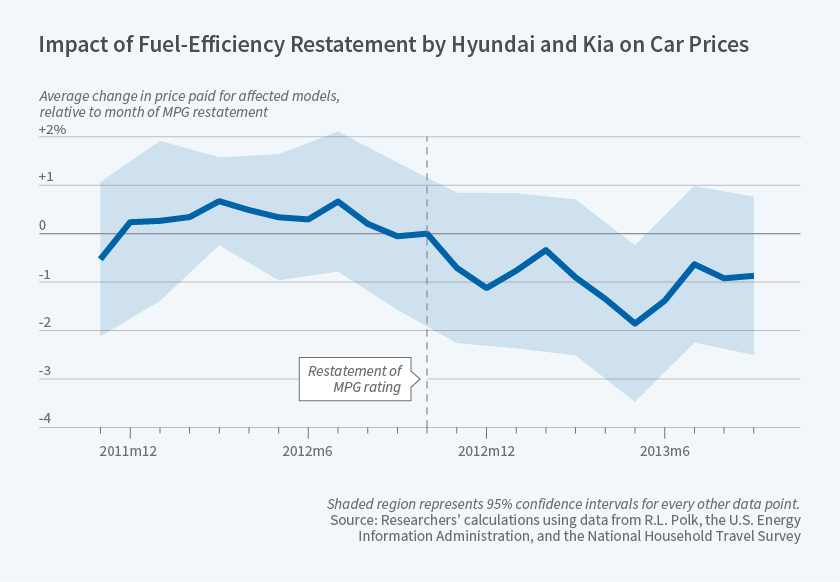 When buyers compare vehicles, a one dollar increase in the present value of future gasoline costs reduces buyer willingness-to-pay by less than 50 cents.

After an audit by the U.S. Environmental Protection Agency in 2012, automakers Hyundai and Kia agreed that they had overstated the fuel efficiency of thirteen 2011-13 models by up to six miles per gallon. The restatement affected roughly 1.6 million vehicles sold. Attributing the misreporting to a "procedural error," the automakers immediately changed the fuel-economy ratings featured on automotive websites and dealer lots for these cars, which include the Hyundai Elantra and Kia Rio. The episode was widely reported in the national news media.

Using detailed microdata on all new vehicle transactions in the United States from August 2011 to June 2014, Kenneth Gillingham, Sébastien Houde, and Arthur van Benthem estimate that the prices of affected models fell by 1.2 percent, or just under $300, after the fuel-economy restatement. The fuel efficiency error created a natural experiment that allowed the researchers to infer how much buyers value fuel economy. In Consumer Myopia in Vehicle Purchases: Evidence from a Natural Experiment (NBER Working Paper 25845), they combine the vehicle transactions and characteristics data with data on miles driven from the National Household Travel Survey and gasoline prices from the U.S. Energy Information Administration. This allows them to estimate that if the future gasoline expenses for a typical driver are discounted at 4 percent per year, buyers appear to have reduced the price they were prepared to pay for a vehicle by 38 cents per dollar of future fuel savings for 2011-12 models, and by 15 cents for 2013 models. The researchers interpret this as evidence of substantial consumer myopia with regard to future vehicle operating costs.

The conclusion that car buyers undervalue fuel economy in new vehicle purchases by more than previously thought implies that it is possible for a policy that shifts consumers into more efficient vehicles to be welfare-improving.

Consumer Myopia in Vehicle Purchases: Evidence from a Natural Experiment