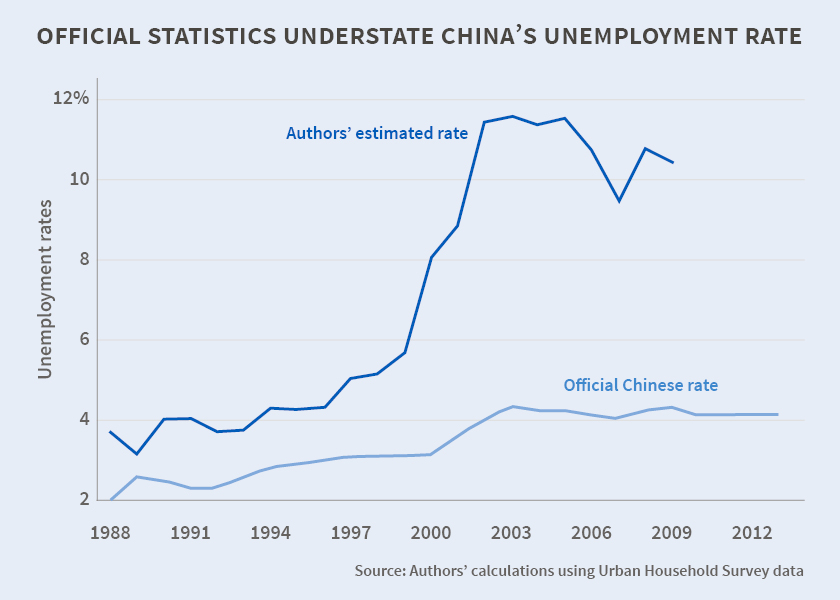 High and rising unemployment in China created by massive layoffs during major changes in the structure of its labor market is not reflected in government figures.

China's real unemployment rate is much higher than the official rate and, when correctly measured, is much closer to that in other nations at similar levels of development, according to Long Run Trends in Unemployment and Labor Force Participation in China (NBER Working Paper No. 21460). The study estimates that the actual unemployment rate in 2002-09 averaged nearly 11 percent, while the official rate averaged less than half that. Moreover, despite some reports to the contrary, by 2009 China's labor market had still not recovered from huge layoffs that occurred during the later 1990s and early 2000s as the nation transitioned from a government-controlled economy to one in which private enterprise and market forces were more at play.

"The official unemployment rate series for China is implausible and is an outlier in the distribution of unemployment rates across countries ranked by their stage of development," write researchers Shuaizhang Feng, Yingyao Hu, and Robert Moffitt. "We find that, by approximately 2002, the unemployment in China was actually higher than that of high income countries, exactly the opposite of what is implied by the official series."

The official unemployment rate in China, which is based on registered unemployment figures, has long been viewed with suspicion. Various private studies have tried to come up with better estimates. This paper uses for the first time a nationally representative sample of registered urban residents–the "hukou" population–based on urban household survey data, supplemented with weights derived from the decennial census. The study derives a much different picture of how Chinese unemployment has evolved since the mid-1990s.

The authors describe three distinct periods in China's labor market. The first–from 1988 to 1995–was characterized by an economy dominated by state-owned enterprises (SOEs). Unemployment was low: their estimate suggests an average of 3.9 percent while the official average was 2.5 percent. Then in 1995-2002, the unemployment rate rose rapidly, by one percentage point per year, as SOEs shed massive numbers of workers and rural migrants flooded the cities in search of jobs. SOEs went from employing 60 percent of China's workforce in 1995 to 30 percent in 2002. Yet the official unemployment rate reflected none of that volatility. Unemployment peaked in 2003 and began to fall in later years, by the authors' calculations. It nevertheless still averaged 10.9 percent for the 2002-09 period while the official average was only 4.2 percent.

Compared to other nations with similar gross national income per capita, China's unemployment rate in 2009 was relatively high. The authors nevertheless caution against making direct comparisons with unemployment rates in other countries, because China’s urban household survey data do not define labor-force status in exactly the same way that many developed nations do.

"Overall, we see that people without college degrees, younger people, and females systematically face more slack labor markets than their more educated, older, and male counterparts," the authors conclude. "The most striking pattern is that younger people had very high unemployment rates, especially for more recent cohorts... Even at the age of around 30, the 1970s female cohorts had roughly a 10 percent unemployment rate, as compared to only 3 percent for females born in the 1960s."

Unsurprisingly, some regions fared worse than others during the transition. The Northeast, South Central, and Southwest regions of the country saw the largest increases in their unemployment rates during the 1995-2002 period. These were also the regions with the greatest number of SOE layoffs. In the Northeast region, for example, some 7.3 million workers were laid off during the period–42 percent of its total SOE employment in 1995.

"The results suggest that cohort differences might be in play and that the younger generation may have faced higher cost and/or lower benefit in participating [in the] labor market," the authors conclude.