Copyright and Creativity: Italian Opera during the Napoleonic Age 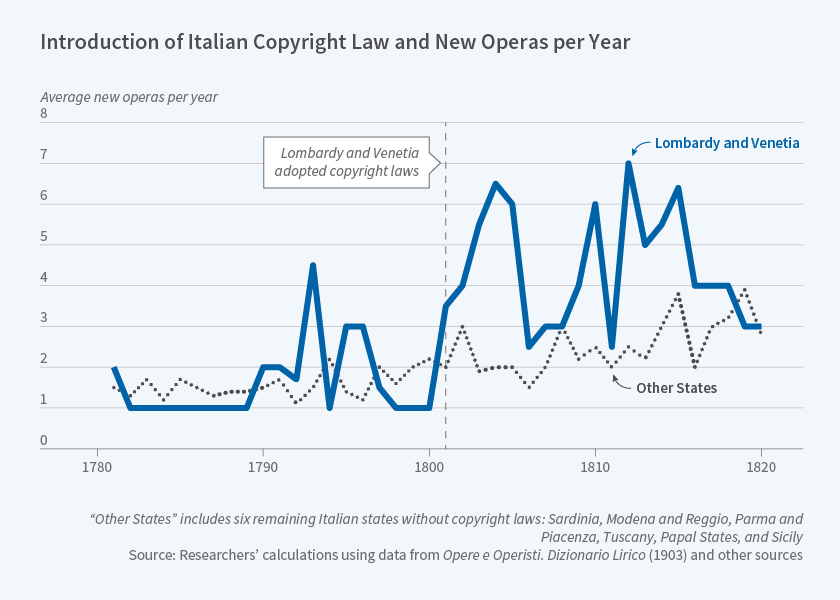 When copyright law increased the financial returns to composition in Italian states conquered by France, both the quantity and quality of new operas rose.

The researchers focus on Lombardy and Venetia, two states that adopted copyright laws in 1801, after they came under French rule. The 1801 law granted composers in these states exclusive rights to their works for life, and an additional 10 years after their deaths to their heirs. With this law composers were not only compensated for writing an opera, but also received additional pay for each repeat performance of their work.

The study compares the number of new operas created in Lombardy and Venetia once copyright was introduced to the quantity created in six other Italian states where copyright was not introduced until the mid-1820s. The analysis draws on the detailed historical records of 2,598 operas premiered in these eight states by more than 700 Italian-born composers between 1770 and 1900.

Before 1801, composers created new operas at a similar rate in states with and without copyright, 1.6 and 1.4 per state-year espectively. After the introduction of copyright, the number of new operas by composers in Lombardy and Venetia increased threefold, to 4.6 per state-year by 1820, while operatic output in other states only increased by 50 percent. Indicators for the level of demand for new operas across the eight states, such as GDP per capita, population, the number of theaters, and the level of urbanization, were similar in states with and without copyright, suggesting that preexisting differences in demand cannot explain the marked difference in creative output across states.

The researchers do not find any evidence for a composer “brain drain,” whereby productive composers moved from other Italian states to states with copyright. Instead they find that copyright motivated productive Italian-born émigrés to Austria and France to return to Italy.

Copyright also improved the quality of operas, measured by their historical popularity and durability. First, the researchers track operas that were popular in their time through to a standard reference of “notable” performances. They find that operas from Lombardy and Venetia were more likely to be immediate hits, and to be performed again after their premiere. Second, the researchers use operas that were performed at least once at New York’s Metropolitan Opera between 1900 and 2014 as a measure of an opera’s popularity and durability. Third, they collect operas sold as complete recordings on Amazon today to identify the most durable works. All of these measures indicate that composers in states with copyright produced more popular and durable operas than those in states without copyright.

Importantly, however, these results only apply to the original adoption of copyright. The researchers show that copyright extensions beyond the life of the composers create no benefits in terms of more and better operas.

Other
Law and Economics
Financial History
Development
Innovation and R&D

Development of the American Economy
Law and Economics
Productivity, Innovation, and Entrepreneurship

Copyright and Creativity. Evidence from Italian Opera During the Napoleonic Age