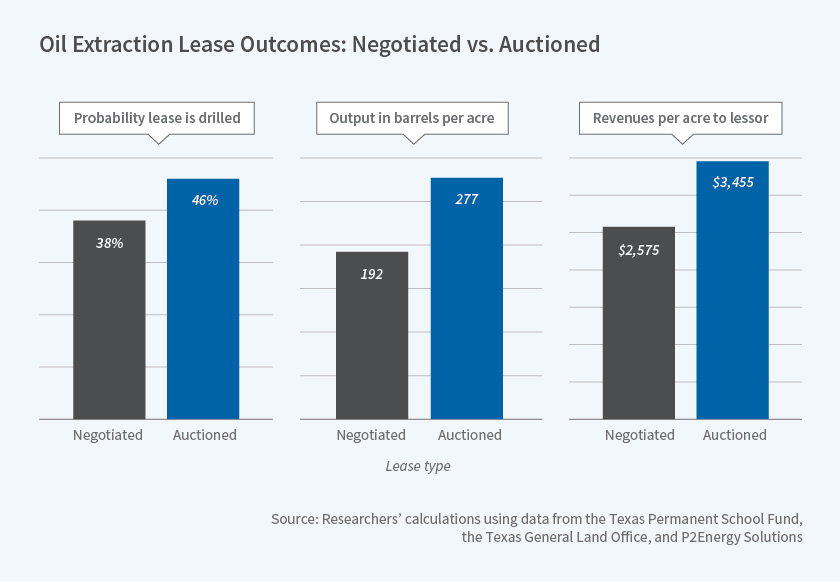 Auctions facilitate better matches between land resources and the firms that can use them most productively, yielding sellers about $249,000 per lease more than negotiated sales.

In Texas, the right to drill for oil and gas on land initially belonging to the Texas Permanent School Fund can be allocated in a number of different ways. If the land was purchased from the Permanent School Fund before 1931, the present-day surface owner negotiates mineral rights leases on the state's behalf. Once the negotiated contract is approved by the state's General Land Office, the surface owner receives half of any upfront bonus and royalty payments the land generates.

In 1931, the state ended this practice, and in 1973 it began formally retaining all mineral rights on land sold from the Permanent School Fund. Unlike privately owned land, mineral rights in this state-owned land are sold at public auction. Firms compete for leases with a fixed primary term and royalty rates by submitting bids in the form of bonus payments.

In Relinquishing Riches: Auctions vs. Informal Negotiations in Texas Oil and Gas Leasing (NBER Working Paper 25712), Thomas R. Covert and Richard L. Sweeney find that auctioned leases are 22 percent more likely to be drilled and that they produce 44 percent more output than negotiated leases. This, along with their slightly higher royalty rates, leads to an average increase in total seller revenue of about $249,000 per lease. The researchers conclude that "informal" negotiation performs poorly relative to auction and that auctions facilitate better matches between land and the firms that can use it most productively.

The study compared auctioned and negotiated leases for mineral rights on parcels of land that lie above shale formations. The leases began at approximately the same time in narrowly defined geographic areas. The original sample included all oil and gas leases signed on Permanent School Fund land between 2005 and 2016. Royalties, if any, were observed through 2018. There were 4,012 negotiated leases and 915 auctioned leases that fit the initial criteria. After applying restrictions for missing data, parcel sizes of less than 10 acres and more than 1,000 acres, and leases shorter than a year, the final dataset included 860 negotiated leases and 460 auctioned leases.

The researchers control for a number of factors when analyzing lease payments, including lease terms, a parcel's size and distance to infrastructure, and its landcover characteristics. They find that auctioned leases lasted longer, generated higher per acre bonus payments, and paid slightly higher royalty rates than their negotiated counterparts.

The researchers suggest that the experience in Texas may generalize to other settings, and that landowners may be leaving money on the table by engaging in negotiated sales. Most of the United States' estimated $4.5 trillion in gas and oil reserves are owned and managed privately, and transactions often involve negotiations rather than auctions. A survey of private mineral rights in Pennsylvania, for example, found that only 21 percent of lessors reported ever consulting with a lawyer before transacting.