Fracking, Oil Prices, and the Pass-Through of Input Costs 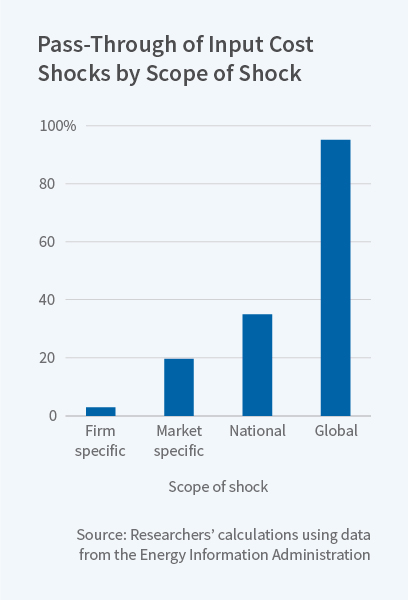 Deep discounts in crude prices resulting from a supply glut in the upper Midwest and plains states produced varying cost shocks for producers.

In market equilibrium, the prices a firm sets for its products depend not only on its own production costs, but on the production costs of its competitors as well. The recent fracking boom generated cost shocks that differed for different firms, providing researchers with an opportunity to study the extent to which prices respond to a firm's own costs, rather than those of its competitors.

Between 2005 and 2015, U.S. oil production nearly doubled. The advent of hydraulic fracking coupled with a ban on export of domestically produced oil — only lifted in December 2015 — led to an unprecedented divergence between U.S. and worldwide crude oil prices.

The benefits of lower costs were spread unevenly among refiners and their customers. Erich Muehlegger and Richard L. Sweeney analyze factors at the firm, market, and industry level that affected how the fracking boom impacted the prices consumers paid for petroleum products. In Pass-Through of Input Cost Shocks Under Imperfect Competition: Evidence from the U.S. Fracking Boom (NBER Working Paper No. 24025), they draw on detailed information compiled by the Energy Information Administration on every refinery in the United States. The database enabled them to pinpoint firm-level costs, and — because they could identify the states where refiners' products were sold — to distinguish between cost shocks affecting close rivals and those affecting firms not in direct competition with one another.

The researchers find that 20 percent of market specific costs, 35 percent of national cost shocks, and 95 percent of global cost shocks are passed through. In the case of fracking, the cost shocks came in the form of deep discounts in crude prices that resulted from a supply glut in the upper Midwest and plains states, regions of high fracking activity. From 2000 to 2010, the West Texas Intermediate (WTI) spot price for crude oil hovered at about $1.40 more per barrel than the Brent spot price, the benchmark for crude prices for the United States and Europe. Between 2011 and 2015, the WTI price averaged $12 per barrel less than Brent crude.

Bottlenecks in the crude oil distribution system hampered oil producers' efforts to transport crude to locations with greater refining capacity. But geography was not the only factor influencing input costs for various refiners. Some refineries close to shale oil sources could not partake in the fracking bonanza because they were equipped to process mainly heavy crude, not the light crude that comprised most of the shale production. Others, such as the international giants Citgo and Aramco, had to continue relying on imported crude produced by their vertically integrated parent companies.

The extent to which refineries benefited from the decline in crude prices also depended on their market share. Those that dominated their markets reduced prices less, and earned higher profits, relative to those in more competitive markets, where most of the cost savings were passed along to consumers.

The researchers extrapolate from their results to a scenario in which there is a broadly applied tax on carbon emissions. They conclude that, on average, refineries would be able to pass most of this tax burden on to customers. They conclude that "while refineries have little ability to pass on idiosyncratic cost shocks, shared cost changes have increasingly larger impacts, culminating in slightly greater than full pass-through for an industry-wide shock."

Pass-Through of Own and Rival Cost Shocks: Evidence from the U.S. Fracking Boom