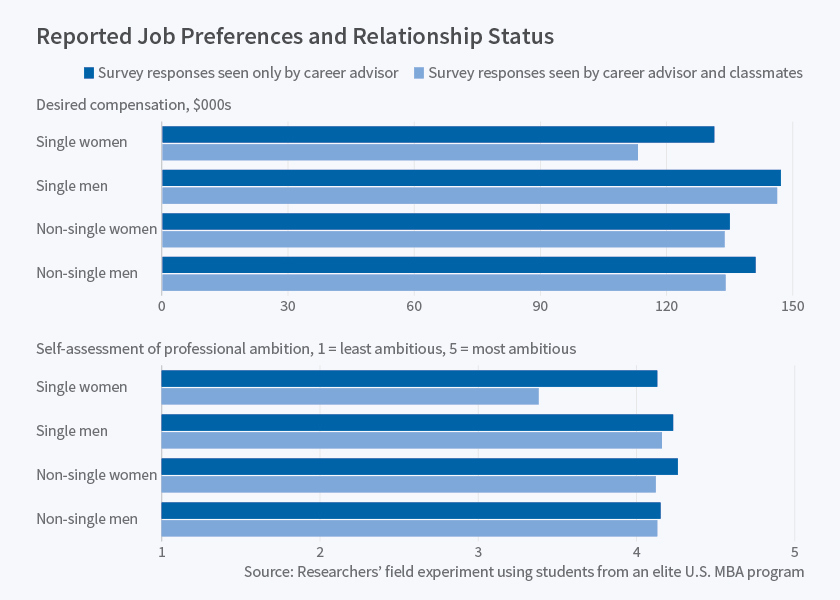 Single women were less likely to display high levels of ambition when they believed that their preferences would be shared with single male classmates.

Some women avoid actions that would help their careers in an effort to appear more marriageable, according to the results of experiments conducted with students starting an elite U.S. MBA program. Leonardo Bursztyn, Thomas Fujiwara, and Amanda Pallais report those findings in 'Acting Wife': Marriage Market Incentives and Labor Market Investments (NBER Working Paper 23043).

In their primary experiment, the school's career center distributed a questionnaire to students designed to be used by the career center in first-year internship placement — a central part of an MBA education that is considered to have a substantial impact on career prospects.

Students were asked about desired salary, willingness to travel, willingness to work long hours, and overall professional ambition. On these dimensions, answers that make women more desirable to employers may make them less desirable to potential romantic partners, the researchers found. Some randomly selected students believed their answers would be seen only by a career counselor, while the remainder believed their classmates would see their answers as well.

When single women believed that only a career counselor would see their responses, they reported similar preferences and abilities to other students. However, when they thought their classmates would see their answers, they reported $18,000 less in desired yearly compensation and they reported being willing to work four fewer hours per week and travel seven fewer days per month. They reported less ambition and less tendency for leadership, though they did not change their self-reports on a placebo question about writing abilities, a skill not penalized in the marriage market. Women in relationships, single men, and men in relationships did not adjust their answers when they thought that their peers would see their responses.

In a supplemental study, students were given a different questionnaire, also to be passed on to the career center. In this questionnaire they were asked to make choices about pairs of hypothetical jobs individually, which would later be discussed with a small group. Membership in the small group was randomized such that some single women had male groupmates, while the remainder had only female groupmates. When placed with female peers, 68 percent of women reported that they would prefer a job with a higher salary and requiring 55 to 60 hours a week over a job with a lower salary requiring 45 to 50 work hours. When placed with male peers, only 42 percent of women expressed this preference. Similarly, with female peers, 79 percent of single women reported preferring a job with quicker promotion to partner but substantial travel over a job with slower and less certain promotion but no travel. When placed with male peers, only 37 percent of women chose that option. Single women were also substantially less likely to choose the career-focused option when there were more single — as opposed to married — men in the group.

The researchers found a similar pattern in class grades, which this business school shares with employers. While married and unmarried women performed identically on exams and problem sets — grades that can be kept from classmates — unmarried women had substantially lower participation grades. Marital status did not predict participation grades for men. In an additional survey, three-fourths of single female students reported that they had at some point avoided actions that they thought would help their careers because they did not want to look too ambitious, assertive, or pushy. Single women were much more likely to report having avoided actions for these reasons than were non-single women or men.