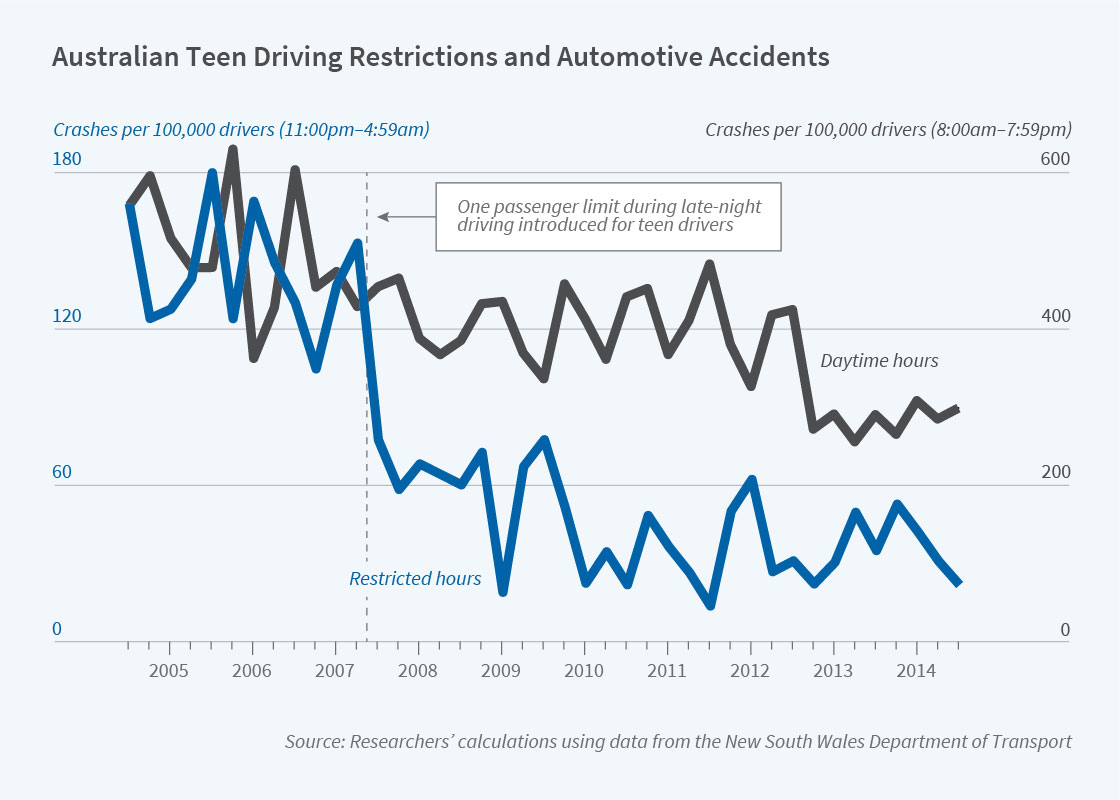 A ban on late night and early morning driving by first-year drivers reduced crashes and fatalities, and had ongoing benefits in later years.

A policy in Australia that banned first-year drivers from carrying multiple passengers from 11 pm until 5 am more than halved crashes, casualties, and deaths during those hours, Timothy J. Moore and Todd Morris report in Shaping the Habits of Teen Drivers (NBER Working Paper 28707). It also lowered crashes earlier in the evening, and seems to have had persistent effects on driving behavior. The estimated gains from this targeted intervention are comparable to those from broader policies that delay teenagers’ chances to drive.

Because driving is one of the riskiest activities that teens undertake, policymakers often impose restrictions on teen drivers to improve safety. Examples include graduated driver licensing laws, passenger restrictions, nighttime curfews, and cellphone bans. While some restrictions have been found to reduce accidents, three issues limit their effectiveness.

First, the safety gains primarily come from reducing the number of teens who get licenses. This delays the acquisition of driving experience and the benefits of driving independently, which may be substantial. Second, risky driving practices continue to account for a large fraction of teen deaths. For example, US teen drivers’ fatality rates per mile driven are over 50 times higher for late-night driving with multiple peers than daytime driving alone, and this ratio is largely unaffected by current teen driving restrictions. Third, the restrictions do not improve safety once a driver is no longer affected by them.

Targeted driving restrictions appear to overcome these issues. The researchers study a July 2007 measure in the Australian state of New South Wales that prohibited first-year drivers from carrying two or more passengers under the age of 21 in the late evening and early morning. Using administrative data on drivers’ licenses linked to detailed crash data, they estimate that the nighttime passenger restriction reduced reported crashes by 57 percent. Crashes that were the target of the restriction went from representing 18 percent of traffic fatalities involving first-year drivers to just 4.3 percent once it was in place. The restriction saved 5 lives per 100,000 drivers in the first year of driving, and a further 0.9 lives per 100,000 drivers in subsequent years.

The researchers also find reductions in property damage and in major physical trauma suffered by teens involved in crashes. They estimate that the restriction reduced reported hospitalizations and fatalities by 58 percent, with 41 fewer hospitalizations, 98 fewer other injuries, and 164 fewer crashes with property damage per 100,000 first-year drivers. The improvements over the first four years of driving are valued at A$412 million (US$320 million), or A$738 (US$570) per driver.

The restrictions appear to have had effects beyond the first year of driving, significantly reducing nighttime multi-passenger crashes in the second and third years after drivers received their licenses. There were no discernible differences beyond the third year, but by that time drivers are much safer, with underlying crash rates that are just one-fifth those of first-year drivers.

Overall, the findings suggest that targeted policies that place limited restrictions on teens’ driving behavior can markedly improve traffic safety while allowing teens to develop driving skills and retain most of the benefits of independent driving.

Health, Education, and Welfare
Health
Other
Law and Economics

Shaping the Habits of Teen Drivers