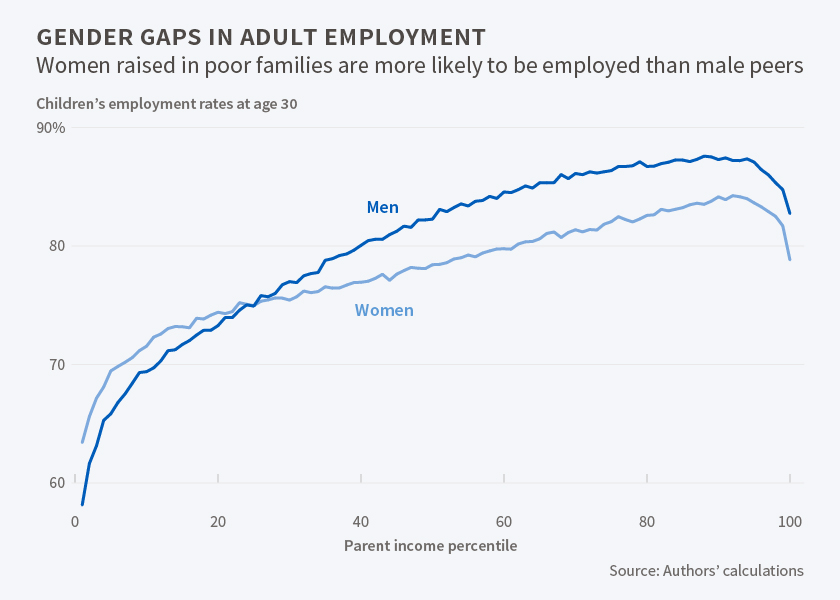 Men who grow up in poor families, especially in areas of concentrated poverty, are less likely to be employed at age 30 than are women of that age from similar families.

The traditional gender gap in employment rates is between more-employed men and less-employed women. But in Childhood Environment and Gender Gaps in Adulthood (NBER Working Paper 21936), Raj Chetty, Nathaniel Hendren, Frina Lin, Jeremy Majerovitz, and Benjamin Scuderi find that the reverse is true for men and women who grow up in poor families. As 30-year-olds, men who grow up in these circumstances are less likely to be employed than women who grow up in similar environments. This reversal is especially strong for those who grow up in areas of concentrated poverty.

The researchers explore outcomes of childhood environment using an anonymized database of approximately 10 million observations that link data from federal tax returns of individuals born between 1980 and 1982 to data on their parents. "Parents" are defined as individuals between the ages of 15 and 40 in 1980 who first claimed those born between 1980 and 1982 as dependents. The researchers study employment at age 30 for those born between 1980 and 1982. They define individuals as employed if they had a W-2, 1099, or Schedule C tax form filed on their behalf. They measure earnings as the sum of the amounts reported on W-2 forms, and they define an individual as having attended college if one or more 1098-T forms were filed for that person by a college when the individuals were between the ages of 18 and 23. Parental income is defined as mean family income from 1996-2000.

Growing up with unmarried parents was associated with lower employment rates for men relative to women throughout the parental income distribution. The researchers note that this finding is "consistent with recent evidence that growing up in a single-parent household is particularly harmful for boys' outcomes during childhood."

For example, employment rates for women were similar at each level of childhood family household income regardless of whether a woman grew up in Charlotte, North Carolina, or New York City. While men who grew up in higher-income households were employed at similar rates in both locations, those who grew up in families in the bottom quartile of the income distribution had divergent outcomes relative to comparable women. Men who grew up in Charlotte were 12 percent less likely to be employed than comparable women, while that difference was only three percent for those growing up in New York.

Combining these results with those from earlier work showing that the employment outcomes of children who move to different areas converge to those of the permanent residents in their new communities, the researchers conclude that gender gaps in employment and earnings in adulthood are "shaped by the neighborhoods in which children grow up." While this research does not uncover the underlying mechanisms driving gender gaps in employment, the researchers draw on recent literature from the social sciences to speculate that "growing up in poverty may induce low-ability boys to switch from formal employment to crime or other illicit activities."