Nature Versus Nurture: A Look at American Inventors 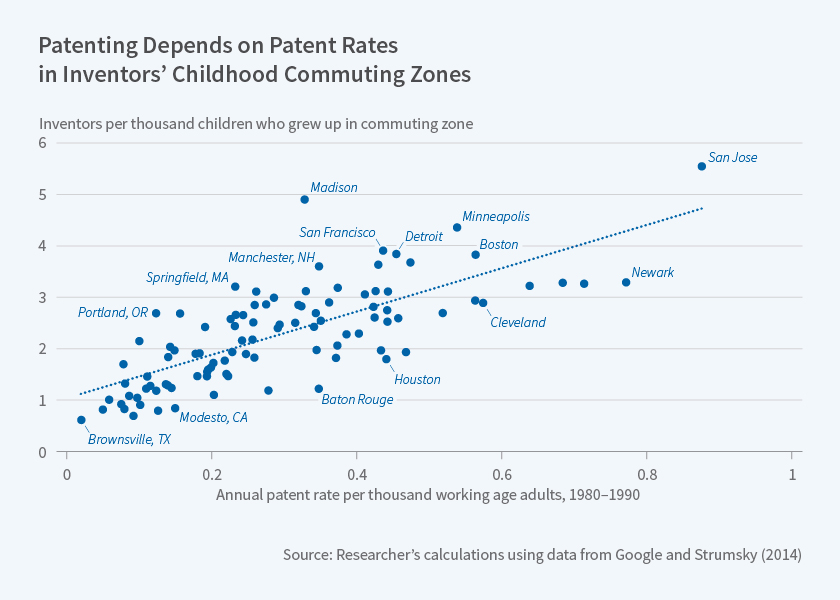 Children who grow up in particularly innovative geographic areas, or who are exposed to inventors via family connections, are more likely to become inventors.

American inventors are disproportionately likely to be white men who grew up in financially successful families. In Who Becomes an Inventor in America? The Importance of Exposure to Innovation (NBER Working Paper No. 24062), Alexander M. Bell, Raj Chetty, Xavier Jaravel, Neviana Petkova, and John Van Reenen find that children from families in the top 1 percent of the income distribution are 10 times more likely to become inventors than those from families in the bottom 50 percent, and that over 80 percent of 40-year-old inventors are male.

The researchers find that neither innate ability nor financial constraints fully explains the disparities. Using data from the New York City public schools, they find that while third grade math test scores are predictive of the probability of securing a patent as a young adult, test score differences explain "less than one-third of the gap in innovation between children from high- vs. low-income families." Among students who score well on third grade math tests, students from low-income families are significantly less likely to become inventors than their wealthier peers. While the explanatory power of test scores grows over time, the researchers estimate that only 5.7 percent of the demographic gap in who becomes an inventor can be explained by differences in ability at birth. And they find financial constraints faced during childhood likewise do not explain the gap, as students from low- and high-income families who attend colleges with large numbers of inventors become inventors at similar rates.

Instead, the researchers point to a powerful causal exposure effect. Using nationwide data on where an individual grew up and patent awards in early adulthood, they find that children who grow up in particularly innovative geographic areas, or who are exposed to inventors via family connections, are more likely to become inventors. This finding applies even among technology categories. Among people living in Boston, those who grew up in Silicon Valley are especially likely to patent in computers, while those who grew up in Minneapolis — which has many medical device manufacturers — are especially likely to patent in medical devices. Moreover, children whose parents hold patents in a particular subclass, such as amplifiers, are more likely to obtain a patent in that same subclass than in another. There is also a strong gender-specific exposure effect: women are more likely to patent in a technology class if they were exposed as children to female inventors who held patents in that same type of technology.

The researchers estimate that if young girls were exposed to female inventors at the same rate as young boys are currently exposed to male inventors, the gender gap in invention rates would be halved. More broadly, if women, minorities, and children from low-income families were to invent at the same rate as white men from high-income (top 20 percent) families, the rate of innovation in America would quadruple.

Who Becomes an Inventor in America? The Importance of Exposure to Innovation