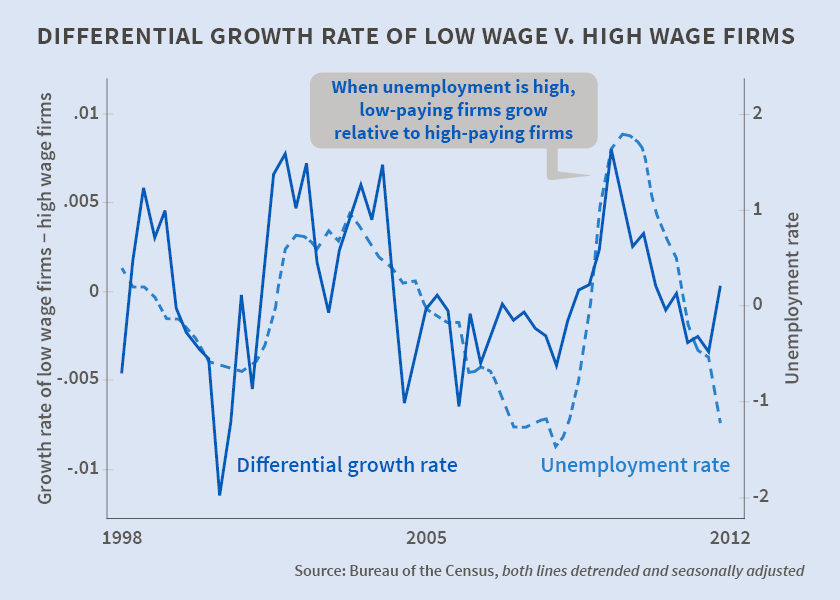 Lisa B. Kahn and Erika McEntarfer analyze the effects of the business cycle on employment at high- and low-paying firms. They find that low-paying firms are less cyclically sensitive, and as a result fare better in terms of employee retention and employment growth during economic downturns.

Kahn and McEntarfer provide evidence that the cyclical pattern in growth rates is likely driven by a partial collapse of movement up the job ladder in economic downturns. This suggests that low-paying firms fare relatively better in a downturn because workers at these firms who are hoping to move on to better opportunities get stuck in place. The authors find that advancement on the job ladder is 20 percent slower for those working at the lowest-paying firms in a major bust, compared with a boom. They also estimate that the distribution of new job matches shifts towards these lower-paying firms in a downturn. The combination of a poor initial match and a reduced likelihood of upgrading implies that new job matchers are particularly hurt by recessions.

Kahn and McEntarfer's data indicate that the reduced ability to move on to better matches caused by a recession has a greater impact on workers in low-quality firms compared with those in high-quality firms. Their results show that workers finding new jobs in recessions are more likely to go to low-paying firms, and more likely to stay there once hired, than workers hired during better economic times. The researchers conclude that these effects yield an estimated 2.6 percent reduction in average firm quality a year after matching for those who find a job in a recession compared with a boom. This corresponds to $75 per month lower average firm pay, and translates into roughly half of the advancement made by workers finding a job during a boom.