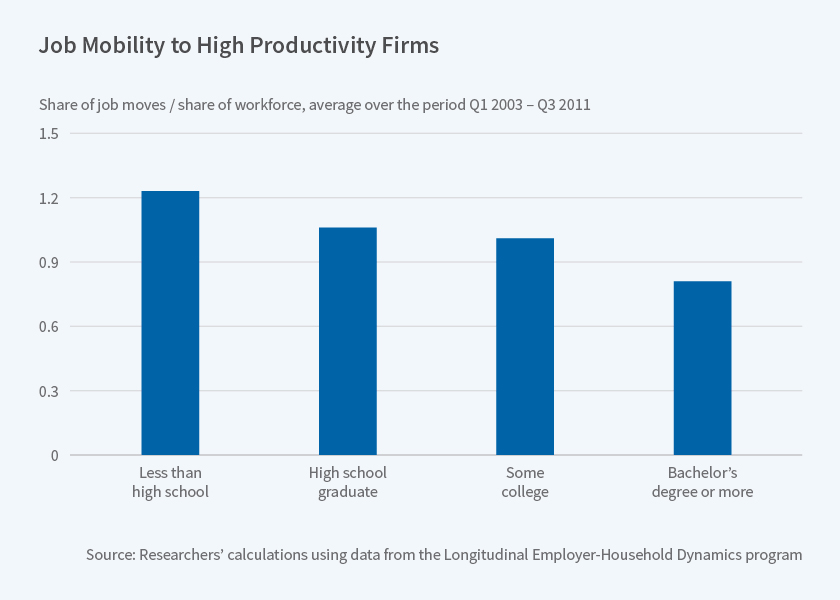 Less-educated workers are disproportionately likely to move up the job ladder during expansions, but they also slide down during downturns.

In Who Moves Up the Job Ladder? (NBER Working Paper No. 23693), John Haltiwanger, Henry Hyatt, and Erika McEntarfer examine demographic patterns in job ladder mobility over the business cycle. Using several datasets from the U.S. Bureau of the Census, they analyze earnings, employment, productivity, and demographic data for 65 percent of the national private sector workforce for the years 1998–2011. Their analysis relies on firm productivity data for a shorter period, 2003–11.

The positive rate of job ladder mobility for younger and less-educated workers is not observed during tough economic times. During contractions, younger and less-educated individuals who are unemployed or out of the labor force are less likely to be hired at all. If working, they are less likely to move up the job ladder to more productive firms, and they are more likely to be knocked off the ladder entirely as a result of job loss. Economic slowdowns, while imposing costs throughout the labor market, are particularly harmful to the employment prospects of younger, less-educated workers.

The researchers note that much of the previous research on the consequences of labor market dynamics during a recession has focused on college graduates, and they suggest that more attention should be paid to the long-term effects on less-educated workers. Because mobility up the job ladder plays a particularly important role in the career paths of younger, less-educated workers, labor market frictions may play an important role in explaining wage differentials between them. In particular, the declining fluidity of the labor market, which has been recently noted, may make it more difficult to climb the job ladder.

Who Moves Up the Job Ladder?